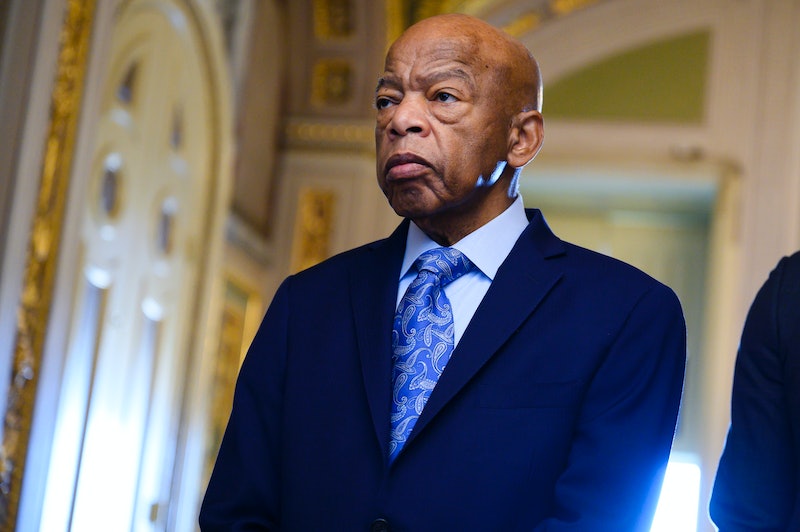 In the immediate hours following the civil rights icon's passing, celebrity tributes to John Lewis paid homage to the late congressman's "good trouble" mantra. Congressman Lewis died on July 17 at 80 years old, after a six-month battle with pancreatic cancer. "He was honored and respected as the conscience of the US Congress and an icon of American history, but we knew him as a loving father and brother," his family said in a statement via CNN. "He was a stalwart champion in the on-going struggle to demand respect for the dignity and worth of every human being. He dedicated his entire life to non-violent activism and was an outspoken advocate in the struggle for equal justice in America. He will be deeply missed."

After the news broke, celebrities from John Legend and Viola Davis to Oprah Winfrey and Angela Bassett joined the chorus of politicians and regular citizens in paying homage to the legacy of the Georgia congressman, who served in the US House of Representatives from 1987 up until his death. One of the leaders of the Civil Rights Movement, Lewis had been arrested multiple times for civil disobedience in the pursuit of justice — or, as he famously called it, "good trouble."

In his own online tribute, The Late Show host Stephen Colbert shared a clip of Lewis explaining "good trouble." Lewis described growing up in rural Alabama, and his parents and grandparents, telling him, 'Don't get in the way' and 'Don't get in trouble' whenever he'd see signs of segregation. "But I heard of Rosa Parks, I heard of Martin Luther King Jr.," he recalled to Colbert. "I met Rosa Parks in 1957 when I was 17. In 1958, I met Dr. King, and these two individuals inspired me to get in trouble, and I've been getting in good trouble, necessary trouble ever since."

The former President penned a lengthy tribute to Lewis, acknowledging his work both as a congressman and a civil rights activist. "He loved this country so much that he risked his life and his blood so that it might live up to its promise," Obama wrote in part. "And through the decades, he not only gave all of himself to the cause of freedom and justice, but inspired generations that followed to try to live up to his example."

The EGOT winner thanked Lewis "for being a warrior for justice" and for "loving us so much" that he devoted and risked his life "to bring us closer to freedom," in a July 18 tweet. "As we mourn and remember his incredible life, let's rededicate ourselves to carrying on his legacy," he wrote, noting it's "long past time to pass the Voting Rights Act to honor Lewis.

Paying tribute to Lewis' service, commitment to change, and courage, the Oscar winner praised the late congressman for the great things he did with his time on earth: "Goodnight sweet Prince. May flights of angels sing the to thy rest." And...pour some blessings on us down here."

Along with a video of their last virtual interview, Winfrey tweeted that she and Gayle King spoke with Lewis last week following false rumors of his passing. "He sounded weak but was surprisingly more alert than we expected," she shared. "I had a final chance to tell him what I’ve said every time I’ve been in his presence: “Thank you for your courage leading the fight for Freedom. My life as it is would not have been possible without you.” I know for sure he heard me. I felt good about that. He understood and was so gracious."

The This Is Us actor expressed her admiration of Lewis and "all that he had the courage to stand for," writing: "His whole life was a movement. Its incredible leaders like him that show us how to get this work done. A giant among men. #RIPJohnLewis."

"Servant well done“ I can hear God saying that to you now!" Hudson wrote on Instagram alongside a photo with the late congressman.

Bassett tweeted both a photo of her and Lewis, in addition to one of the Georgia Democrat's many memorable quotes. "Oh how we will mourn your loss and yet strive to continue your fight for justice for us all," added the Academy Award nominee.

"Today we have lost a heroes' Hero," Carey wrote in an early July 18 tweet. "Thank you God for John Lewis's life of service. Let us continue to try to walk his walk of truth. Rest in Power." Meanwhile, fellow pop singer Perry retweeted Senator Kamala Harris' tribute, thanking Lewis for all the good he gave, and Rihanna simply wrote, "Thank you my brother. Thank you!"

Diddy thanked "King John Lewis" for his "lifetime of service for our community," adding a photo with the congressman. "We will finish what you started ON GOD! #GoodTrouble," he wrote.

One of the first to honor Lewis on Twitter after news of his death broke, the NBA star wrote, "Rest. In. Paradise John Lewis. #CivilRightsICON THANK YOU!!"

The Selma director included a fan video from a talk she previously participated in with Lewis, tweeting: "What will the world be like without, John Lewis? What an icon. A giant among us. So grateful to have had any time with him. What warmth and wisdom he leaves behind for us. My goodness we will miss him so.

In a series of tweets, Brown encouraged her followers to honor Lewis' legacy by following his "good trouble" example. "There are men & there are ICONS," the actor wrote in one post. "@repjohnlewis was an ICON. His righteous fight for Civil Rights & all the #GoodTrouble he got in will resonate for GENERATIONS. He was a GIFT to this nation & the WORLD. I pray we all figure out how to live up to the example he set. #RIPSir." The Walking Dead star Gurira wrote, "We have lost an American hero."

Porter shared a photo with Lewis from a 2016 Human Rights Campaign dinner, writing, in part: "One of my heroes. A true legend. Thank you for teaching us how to fight for liberty & justice for all mankind."

The Grey's Anatomy creator described one of the "proudest moments of [her] life" as the time she hosted a talk by Lewis in her home: "He was kind, funny and full of wisdom.This morning, I did my best to explain to my daughters the magnitude of what this great man had done for us all. There just aren’t enough words."

On Instagram, Bush wrote that we "have lost a king among men." Thanking Lewis for his activism, service, standing against injustice, and kneeling in prayer for progress, she wrote, in part, that he "showed us how to fight from a place of love." Bush added, "Rest In Power, dear sir. You made all kinds of good trouble, for the good of us all. Your example is, and shall remain, timeless and eternal."

Tamblyn tweeted, "I was not ready for Rep. John Lewis to go. Especially in this particular year," the actor tweeted. "Thank you Mr. Lewis for inspiring us, challenging us, comforting us, igniting us, and leading us with dignity, grace, and purpose. We'll hold you now as you always held us. #RIPJohnLewis."

All three actors pointed to Lewis' accomplishment — and pointed out ways to honor him through legislation. Diggs highlighted Lewis' introduction of the Emmett Till Unsolved Civil Rights Crime Act, while Perabo encouraged the restoration of the Voting Rights Act. For her part, Sykes wrote, "If you’re not registered to vote, do so today in honor of John Lewis. #goodtrouble"

The Star Wars actor called the congressman a hero, civil rights icon, inspiration, and legend, in addition to sharing the following Lewis quote: "I have been beaten, my skull fractured & arrested more than 40 times so that each & every person has the right to register & vote. Do your part. Get out there & vote like you've never voted before." Takei shared a photo of himself with Lewis at the Asian American Journalists Association conference last August in Atlanta. "A towering figure for civil rights, and a voice we will miss greatly," the Star Trek actor tweeted. "Rest in Power, sir."

The astrophysicist shared a personal photo, writing: "A force of nature unto himself, he lived and breathed social justice — as citizen, activist, & long-time Member of Congress. A reminder to those in power that our founding documents promise Life, Liberty, and the pursuit of Happiness — for all. John Lewis RIP: 1940-2020."

The actors separately reflected on words that described Lewis. Parker called him an "Original Freedom Rider, Congressman, Last remaining speaker of March on Washington, Father, Friend, Fighter for ALL OF OUR FREEDOMS." For his part, Pope settled on one powerful word: "mighty."

The tributes to Lewis that continue to flood social media are but a piece of the evidence that his "good trouble" legacy will live on for generations.

More like this
Lewis Hamilton Turned Down A Role In 'Top Gun: Maverick' For This Surprising Reason
By Darshita Goyal
Christina Aguilera Took A Powerful Stand At Brighton Pride
By Sam Ramsden
'Scream’s Courteney Cox Has Broken A Major Horror Record
By Sophie McEvoy
'I'm A Celebrity' Is Officially Returning To The Australian Jungle
By Sam Ramsden
Get Even More From Bustle — Sign Up For The Newsletter