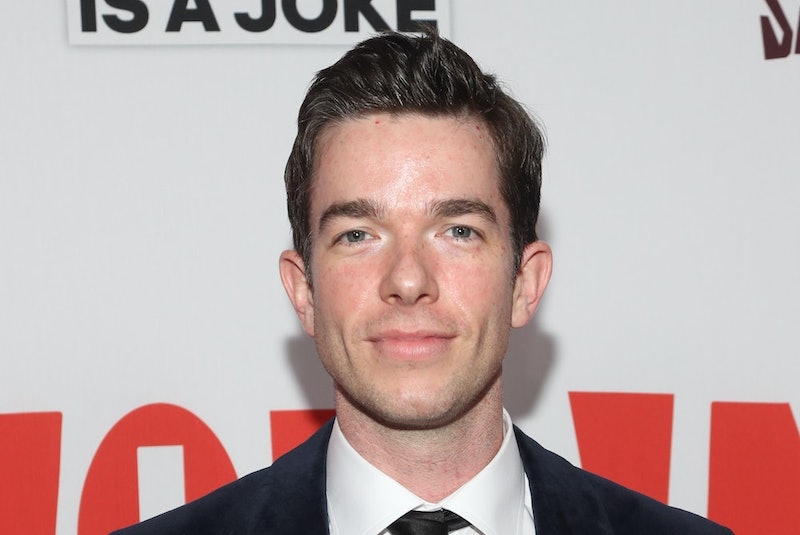 Following reports that comedian John Mulaney has checked into rehab, celebrities and fans alike have taken to social media to send their love and support to the comedian. The former Saturday Night Live writer went to a facility in Pennsylvania over the weekend after a relapse, according to multiple reports. Mulaney, 38, has long been vocal about his alcohol and drug addiction in past stand-up specials and interviews, revealing that he began drinking at 13 and became sober at 23.

A source told Page Six that the comedian is "on board with his recovery" and "not fighting against" his 60-day stay at the facility. "John's friends and family are happy that he's finally getting some help and focusing on his health," the source said. "His fans know he's struggled in the past with sobriety — he has talked about it openly. Unfortunately he has struggled again during the pandemic." In the wake of the news, Patton Oswalt, Olivia Munn, and more stars have taken to Twitter to wish Mulaney a successful recovery.

Mom actor Kristen Johnston, who has also been vocal about her struggles with alcohol and drug addiction, tweeted on Monday, "Never, ever be ashamed of being brave enough to ask for help." The Simpsons writer Tim Long praised the comedian and tweeted, "I hope he & everyone who's struggling these days get the help they need."

It wasn't just celebrities who weighed in on the news with words of encouragement; Mulaney's fans also took to social media with messages of care and concern.

The comedian opened up about his sobriety in an October cover story with Esquire last year. "I drank for attention. I was really outgoing, and then at twelve, I wasn't," he said. "I didn't know how to act. And then I was drinking, and I was hilarious again." Cocaine soon followed and he "loved it." However, his watershed moment came in August 2005: "I went on a bender that weekend that was just, like, fading in and out of a movie," Mulaney said. "I was like, 'You're f*cking out of control.' And I thought to myself, 'I don’t like this guy anymore. I'm not rooting for him.'"