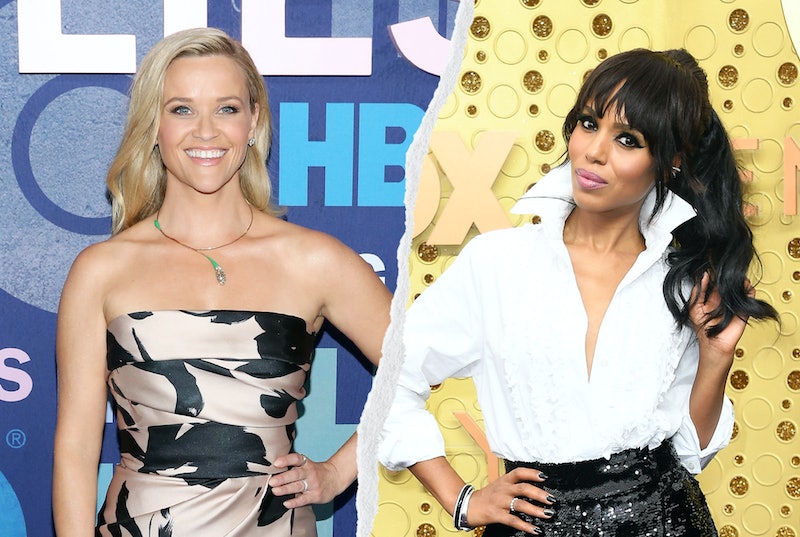 'Tis the season for wholesome celebrity memes. Reese Witherspoon, Kerry Washington, Elizabeth Banks, Garcelle Beauvais, Mark Ruffalo, and several other stars have taken it upon themselves to spread some holiday cheer with celeb-themed Elf on the Shelf memes. And yes, the memes are taking the popular Christmas toy to new, star-studded heights. Elf on the Shelf? We don't know her. But we do know Garcelle on a Pharrell, Hanks on a Banks, Perry on a Kerry, and Stark on a Mark.

The meme began after Beauvais shared a repost of a miniature version of herself bolstered on singer Pharrell's shoulders. "You've heard of Elf on a Shelf, now get ready for this…" she wrote. It then prompted Banks to create her own version, this time with actor Tom Hanks to evoke Hanks on a Banks. The Pitch Perfect actor's post prompted responses from Washington, who created Perry on a Kerry, and Ruffalo, who used Iron Man’s Tony Stark for his Stark on a Mark.

Since then, Reese Witherspoon, Jennifer Garner, Taraji P. Henson, Tracee Ellis Ross, Drew Barrymore, Melissa McCarthy, and a long list of other celebs have put their own spin on the festive meme. Explore them below, starting with the one that started 'em all.

Garcelle Beauvais' Garcelle on a Pharrell

Elizabeth Banks' Hanks on a Banks

Taraji P. Henson's Cardi B on a Taraji P

Reese Witherspoon's Grease on a Reese

Kerry Washington's Perry on a Kerry

Tracee Ellis Ross' The Boss on a Ross

Jennifer Garner's Penn on a Jen

Drew Barrymore's Drew on a Liu

Melissa McCarthy's Chrissy on a Sissy on a Missy

Mark Ruffalo's Stark on a Mark

Leslie Jordan's Corden on a Jordan

Gal Gadot's Pascal on a Gal

Mariah Carey's Carrey on a Carey

Anne Hathaway's Janney on an Annie

Zooey Deschanel's Bowie on a Zooey

Katie Couric's Bradys on a Katie

Julianne Hough's Puff on a Hough

Idina Menzel's Denzel on a Menzel