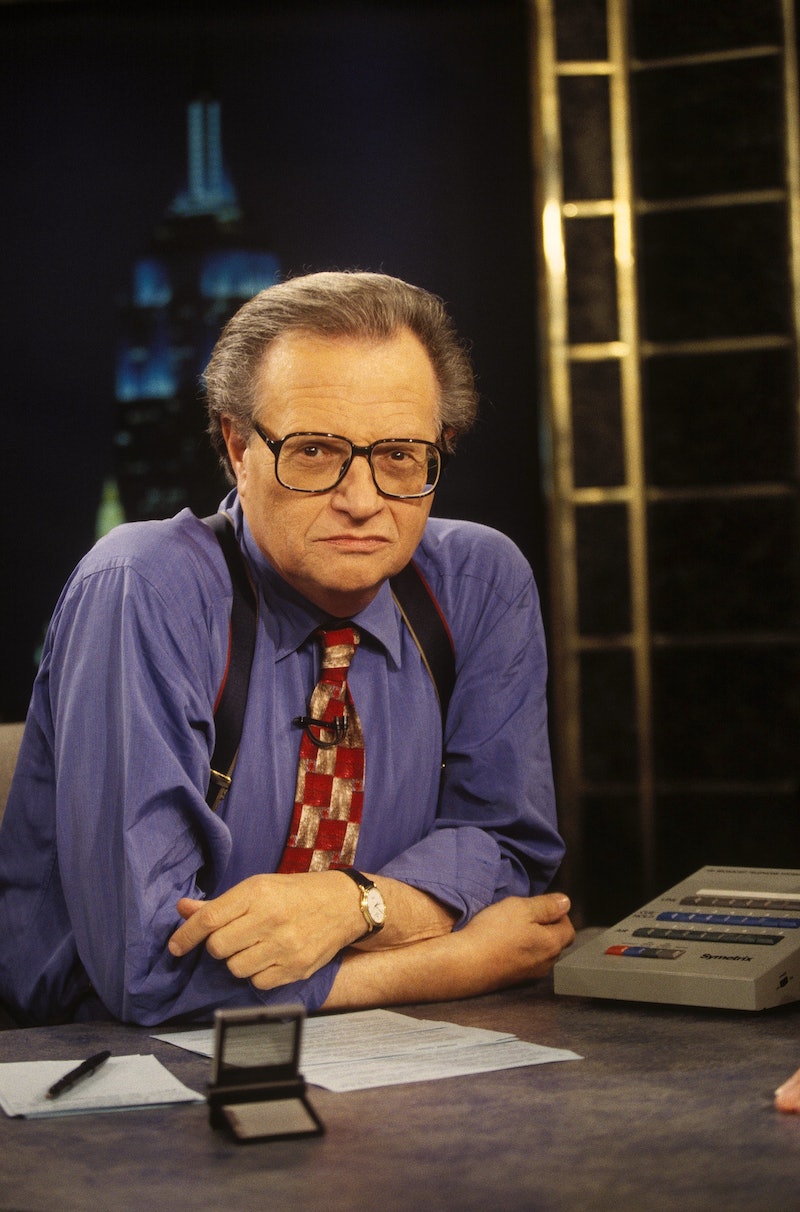 Having interviewed everyone from heads of state to reality stars over the course of his storied career, Larry King, who died on Saturday, Jan. 23 at age 87, earned the respect of a wide range of public figures. Not surprisingly, an equally eclectic group penned the celebrity tributes that began pouring in after news of the Emmy-winning TV host's death broke. Seemingly everyone from fellow TV great Oprah Winfrey to rapper 50 Cent to former President Bill Clinton paid their respects on social media.

King's production company, Ora Media, announced via Twitter that the talk show host had died at Cedars-Sinai Medical Center in Los Angeles on Saturday morning. His son Chance Armstrong also confirmed King’s death, per CNN. While neither his company nor his son shared his cause of death, the announcement came just weeks after King was hospitalized with COVID-19, which CNN reported on Jan. 2. A spokesperson told the Associated Press on Jan. 4 that the broadcaster had received supplemental oxygen and spent time in intensive care before being moved out.

"For 63 years and across the platforms of radio, television, and digital media, Larry's many thousands of interviews, awards, and global acclaim stand as a testament to his unique and lasting talent as a broadcaster," Ora Media's Jan. 23 Twitter statement read, in part. "Additionally, while it was his name appearing in the shows' titles, Larry always viewed his interview subjects as the true stars of his programs, and himself as merely an unbiased conduit between guest and audience."

Numerous TV personalities were quick to honor King, including Oprah Winfrey, who wrote that it was "always a treat to sit at your table." Fellow talk show host Ryan Seacrest called King a friend, mentor, and "American treasure," while Andy Cohen praised the "easy breezy format" of his CNN show. Craig Ferguson also shared that King had taught him so much, and Wendy Williams called him a "broadcast legend."

Stars including 50 Cent, Celine Dion, Karamo Brown, Omarosa Manigault Newman, Kevin Smith, and Jake Owen were among those who reflected on their own appearances on King's shows over the years by sharing photos and videos from their interviews.

Piers Morgan struck a somewhat different tone, sharing details of their feud, but he also referred to King as a "brilliant broadcaster & masterful TV interviewer."

Reese Witherspoon, Yvette Nicole Brown, and Johnny Weir recalled the honor of being interviewed by the legend.

Musicians including Boy George, Bret Michaels, and Lil Duval paid their respects both to King and his loved ones.

Actors Kirstie Alley, Jean-Claude Van Damme, William Shatner, and Debi Mazar also tweeted about their own memories of King and his interviews.

Meghan McCain added that "the world is far less interesting" without King.

In the words of King's own final signoff from Larry King Live in 2010, "Instead of goodbye, how about, 'so long'?"

More like this
Twitter Is In Awe Of Taylor Swift’s “Lavender Haze” Music Video
By Jake Viswanath
Twitter Is Roasting Liam Hemsworth Thanks To Miley Cyrus' New Song “Flowers”
By Jake Viswanath
15 Photos Of 'The Last Of Us' Star Pedro Pascal That Cement His Zaddy Status
By Radhika Menon
Who Is Pete Davidson Dating? He & Chase Sui Wonders Got Caught Kissing
By Jake Viswanath
Get Even More From Bustle — Sign Up For The Newsletter
From hair trends to relationship advice, our daily newsletter has everything you need to sound like a person who’s on TikTok, even if you aren’t.