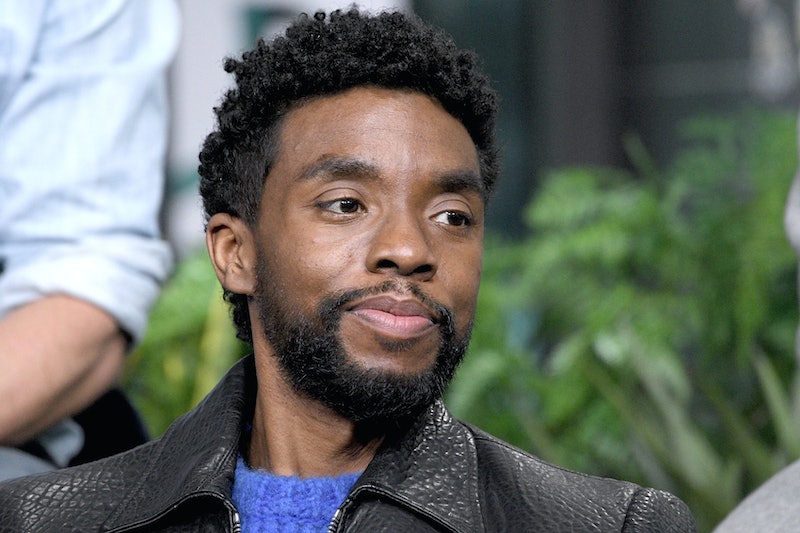 Fans are mourning the loss of a groundbreaking Hollywood star after it was announced that Black Panther actor Chadwick Boseman died of colon cancer at the age of 43. The actor's death was announced via his official Twitter account Friday evening, revealing that Boseman had been battling colon cancer since 2016. "It is with immeasurable grief that we confirm the passing of Chadwick Boseman," the statement began. "Chadwick was diagnosed with stage III colon cancer in 2016, and battled with it these last 4 years as it progressed to stage IV." The statement continued, noting that he died at home "with his wife and family by his side."

Boseman had never publicly spoken about his cancer diagnosis, but, according to the statement, for the past four years, he had been working on films in between "countless surgeries and chemotherapy." Most recently, Boseman was seen defeating Thanos in Avengers: Endgame, fighting crime in 21 Bridges, and ;playing a soldier in Spike Lee's Da 5 Bloods. According to the statement, he will also appear in Ma Rainey's Black Bottom, which will now be his last film. The statement continued, calling him "a true fighter," and making special note of his groundbreaking Marvel role. "It was the honor of his career to bring King T'Challa to life in Black Panther."

Boseman made his Marvel debut playing King T'Challa, aka Black Panther, in 2016's Captain America: Civil War. His Black Panther solo film made history as the first MCU film with a Black superhero lead. It went on to become Marvel's most successful film to date, and was the first Marvel Studios film to be nominated for Best Picture at the Oscars — it was nominated for 7 total and took home 3. He reprised the iconic role in Avengers: Infinity War and Endgame, and was planning o returning for the highly anticipated Black Panther II. On Friday night, the official Black Panther film Twitter account shared a short tribute to the star, writing, "Our hearts are broken and our thoughts are with Chadwick Boseman's family. Your legacy will live on forever. Rest in Peace."

Though he starred in many other films, and played many more iconic and historic characters, including Jackie Robinson in 42, James Brown in Get on Up, and Thurgood Marshall in Marshall, it's safe to say that most fans knew him as a superhero who changed Hollywood. And now his legacy has another added layer as fans learn that throughout his ascent to fame — in between trips to the Oscars, press tours, and fighting bad guys in his Black Panther suit — he was in fact battling cancer. As writer and activist Brittany Packnett Cunningham wrote on Twitter, "Chadwick really suffered through all of that for *us.* Think of all the stories he helped tell. All the people he helped find hope. All the Black children for whom he could be a powerful reflection? Despite his own terminal pain." She continued, giving voice to the grief and awe many fans expressed on social media, "I am astonished by the weight of that sacrifice."

Boseman is survived by his wife and family, including two brothers, and by the legacy of Black Panther.