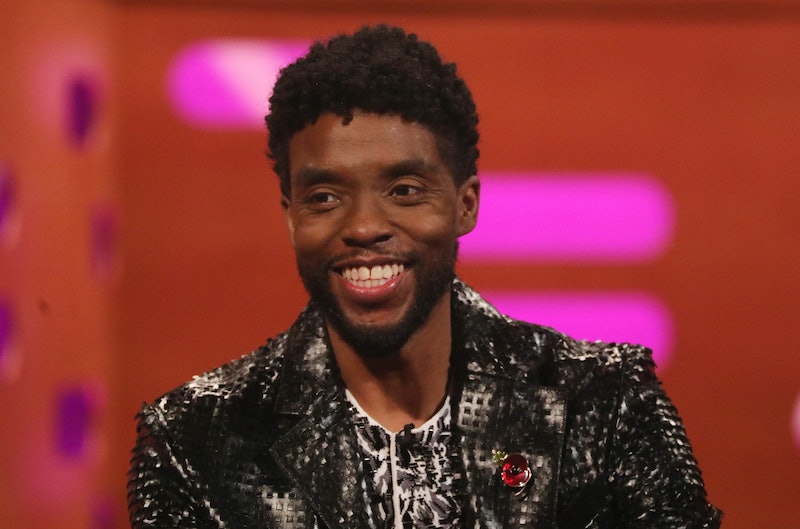 After Chadwick Boseman died at the age of 41 on Friday, Aug. 28, after a secret four-year battle with colon cancer, fans have been finding ways to honor his memory, be it with touching social media posts or fan art, or even Marvel-themed memorials. But one petition would potentially make an even bigger impact in the actor's hometown, where Chadwick Boseman fans want to replace a confederate statue with a memorial to the Black Panther star.

An online petition created by DeAndre Weaver on Change.org, calling for Boseman's hometown of Anderson, South Carolina to replace a statue of a confederate soldier with one of the late actor, has been signed by over 26,000 people. The petition argues that Boseman should be celebrated for spending his life "uplifting the stories of Black Americans, both real and fictional," and carrying that impact to the residents of his own hometown as well. Boseman's career may have been cut short, but in recent years he made a name for himself by playing truly iconic and historical figures in the Black community, including playing Jackie Robinson and Thurgood Marshall. And Weaver wants to make sure his legacy is celebrated in the hometown he loved so much.

"Upon the release of his film Black Panther, Mr. Boseman took it upon himself to rent out a theatre in his home town of Anderson, South Carolina to show the film for free, so that young boys and girls could be inspired by the film without the financial barrier," the petition reads. In 2018, the star reportedly bought out screenings of Black Panther in Anderson, inviting 312 young children to come see the film for free. "Mr. Boseman is without question an American treasure and his accolades go on and on. It is only fitting that his work is honored in the same place that birthed him."

The current statue located at the Town Square in Anderson's Downtown district is dedicated to confederate veterans of Anderson County. Residents of Anderson have previously attempted to remove the statue, but the state's Heritage Act makes it illegal to alter or remove monuments dedicated to any war, including confederate war efforts, without a two-thirds vote from the state legislature.

Weaver told ABC Houston that he is currently working with city and county leaders in an attempt to remove the statue, and spoke about why he thinks Boseman would be a worthy replacement. "For me, a monument to Mr. Boseman will honor not only his legacy, but will allow people to have someone look upon them with justice," he explained. "I think this statue is an overdue honor in his hometown, and even more so, it would be a symbol to the Black residents of Anderson and Black Americans that they matter."