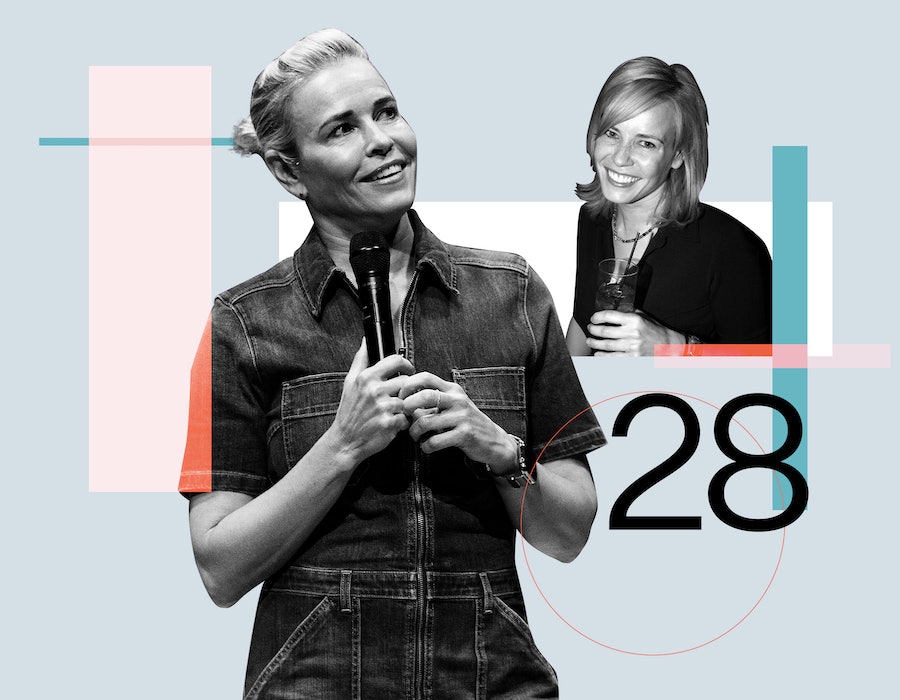 In Bustle’s Q&A series 28, successful women describe exactly what their lives looked like when they were 28 — what they wore, where they worked, what stressed them out most, and what, if anything, they would do differently. This time, comedian, producer, and writer Chelsea Handler remembers the year her career rocket-launched and the ways her friends, boyfriend, and bank accounts reacted.

Chelsea Handler is one of those maddening creative types who’s actually been more productive during the pandemic. Take her new comedy special, Chelsea Handler: Evolution, which airs Oct. 22 on HBO Max and was taped this summer in her native New Jersey to an outdoor, socially distant audience. “In my history of doing stand-up, I've never been this disciplined, this focused, and this sober,” says Handler, 45. “I mean, I’m not sober. But you know what I mean.”

The show slips deftly between jokes about drugs and her sexual attraction to New York Governor Andrew Cuomo before building to an intensely vulnerable arc about how therapy helped her process perhaps the darkest moment in her life. “I had a story that I wanted to tell everybody,” she says. “I didn't want to do stand-up again until I had something of import to say — not just getting up there making fun of everything.”

“Having something to say” has been the driving force of Handler’s career, even back at age 28. That year, 2003, was perhaps her last of relative anonymity; soon after, she released a monumentally successful first book, which led to The Chelsea Handler Show on E!. “I was definitely expanding and I definitely felt I was getting somewhere,” she says, though she laments her “orange-y blonde” hair of that time period. “I never knew exactly what I was going to do. I just knew that this is where I belonged and I wanted a platform.”

I was living in LA. I was working on a show called Girls Behaving Badly, a hidden camera show on Oxygen. We played practical jokes on people. One of my best friends was on the show with me, Shondrella Avery, so yeah, it was a good time. And I was in the process of writing my very first book when I was 28, My Horizontal Life: A Collection of One-Night Stands. I think it came out when I was 29. Things were starting to happen. I wasn't waiting tables anymore, which I hated — I just do not have the personality, as you can imagine, for waiting on people. It felt like, OK, there was so much I wanted to accomplish, but at least I was getting paid to do what I like to do.

What did you move to LA to do?

Why did you want to write a book? Not every stand-up comedian translates their jokes and stories into that format.

I was telling these stories at dinner parties all the time — “Oh my God, this is what happened with this guy. Can you believe this guy had a retainer?” People were like, “You should write these stories down.” And I’d say, "I'm not a writer. I didn't even go to college." I was self-conscious about that. And then I read David Sedaris’ books. I said, "Wait a second. You could just write essays?” You could write a collection of essays within a book. I was dating this guy at the time who didn't want me to be a public figure. I remember saying, "I want to write a book about all my one-night stands." And he said, "You can't do that. If you do that, we're not dating. I don't want a girlfriend who's talking about her one-night stands." I just thought, "Oh, now I have to write it."

How did you get the courage to write about that?

I feel like as long as you're telling the truth, there's nothing to be nervous about. I'm always oversharing. That's my sh*t. That's what I'm known for. I like speaking truth about whatever experience I'm going through, which is why this special is meaningful to me. It's exactly the truth of the most personal experience of my life. I think people take a lot of comfort when they hear about another person's story.

Was it difficult to sell?

I had a book agent. I remember I made $35,000 on my first book. I thought, "Oh my God! I can retire!" And then they were like, “Over three payments.” It got turned down by pretty much everyone except for Bloomsbury. They all thought it was too raunchy. I was like, please, every woman has had a one-night stand — not every woman, but most women, and every man. Everyone can relate to this. And these are funny stories! Stop being so taboo about things. Anything that's “taboo,” I reject.

Did you buy yourself anything with that big check?

Yeah, I'm sure. I mean, I always lived over my means. When I was waiting tables, I was in $40,000 of debt for about eight years straight. A couple of my girlfriends had filed bankruptcy. They played that trick where you could file bankruptcy, and then you get brand new credit cards the next month. You are just clear of debt. I remember being so revolted by that — I was like, "I'm never doing that." When I paid off my credit card bills, the feeling of satisfaction was incredible.

"I think people take a lot of comfort when they hear about another person's story."

How did the people in your life feel as you started to break through?

Sometimes you sensed people being jealous of you or not as happy for you as you would have liked your own friends [to be]. I remember I told my friend I got a book deal and she rolled her eyes at my other friend and I was like, "What is that? How can you not be happy, be rooting for me?" And they said, "Well, I mean, you're not a writer." It was just gross. It made me feel so bad. But now when people are like that, I understand — I have a better idea of where it's coming from.

To stop drinking diet soda immediately. Stop smoking cigarettes immediately. I would've really liked, at that time, to learn how to be less reactive. That's the best change that I've been able to make in my life. If I read a text or an email that annoys me, I'm like, “Put it down, walk away. You're not going to care this much in 10 minutes. And if you do, then you can figure out a way to respond to it.”

What would your 28-year-old self think of you now?

She'd be pretty floored. I think about that a lot. I would have loved to hear, "Oh, you're going to be OK.” If somebody had just told me that… but you don't have that drive when you have that kind of assurance. I would have never imagined that I would have written six New York Times best-selling books. No. No f*cking way would I have believed that.

More like this
At 28, Sharon Horgan Was Hoping To See Damon Albarn At The Pub
By Samantha Rollins
Jinkx Monsoon Is About To Get Real Sketchy
By Sam Ramsden
On 'The Handmaid’s Tale,' Christine Ko Fights Back
By Gretchen Smail
A Is Officially Coming Back To Wreak More Havoc In 'PLL: Original Sin' Season 2
By Kadin Burnett
Get Even More From Bustle — Sign Up For The Newsletter