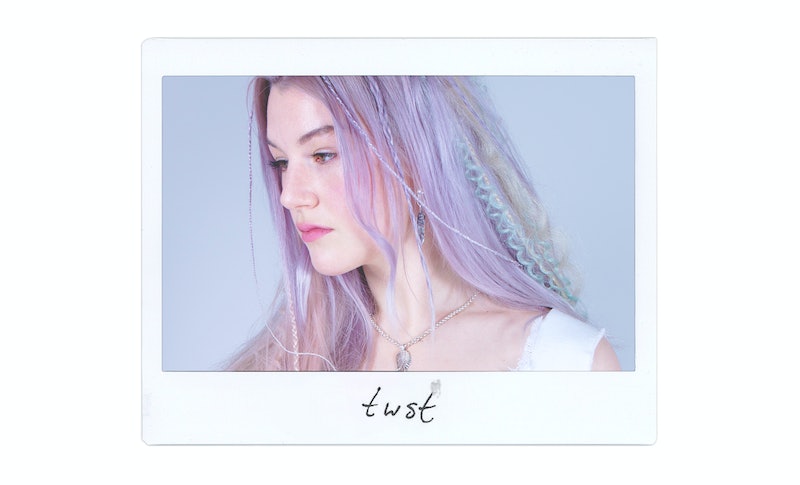 When celebrities (virtually) hang out with Bustle writers, we want to give them the chance to leave their mark. Literally. So we hand them a pen, a piece of paper, a few questions, and ask them to get creative. This time, Welsh singer-songwriter Chloé Davis, aka twst, joins us in the booth.

If you've not yet heard of twst, here's why she should be on your radar. Her sound has been compared to Billie Eilish and Charli XCX – given that her tracks are mixed by Eilish's producer Rob Kinelski, it makes sense – and she creates music almost exclusively from her bedroom, something we can all to relate to in the last few months.

The 21-year-old songwriter, vocalist and producer, Chloé Davis, moved out of her home in Barry at the age of 14, leaving formal education to start making music in the South Wales Valleys. She says she spent most of her teenage years as a recluse, teaching herself everything she knows.

She's now making big waves on London's music scene – writing, producing, and directing all of her tracks and videos, mostly from her makeshift home studio. Just before lockdown she released 'Are You Listening?', which premiered on Zane Lowe's Beats 1 show. And last week, she dropped her latest track, 'Are You Filming Me?', with the tagline "written in isolation, filmed in quarantine".

Digital spaces, and the relationships we create within them, are a recurring theme within her music. "I am fascinated by the connection between technology and emotions and how far these are able to intertwine," she told Our Culture, explaining that filming her music videos is a form of "self-documentation."

Here, we get to know a little bit more about the girl behind the music.

More like this
What Is Shakira’s Net Worth? These Figures Definitely Don’t Lie
By Maxine Harrison
Rihanna Just Made Her First Official Outing Since Becoming A Mother
By El Hunt
Michael Bublé Fans Are Raging After They Missed His Gig Due To Traffic Jams
By El Hunt
George Ezra’s “Green Green Grass” Was Inspired By A Special Christmas Memory
By Frances Stewart
Get The Very Best Of Bustle/UK