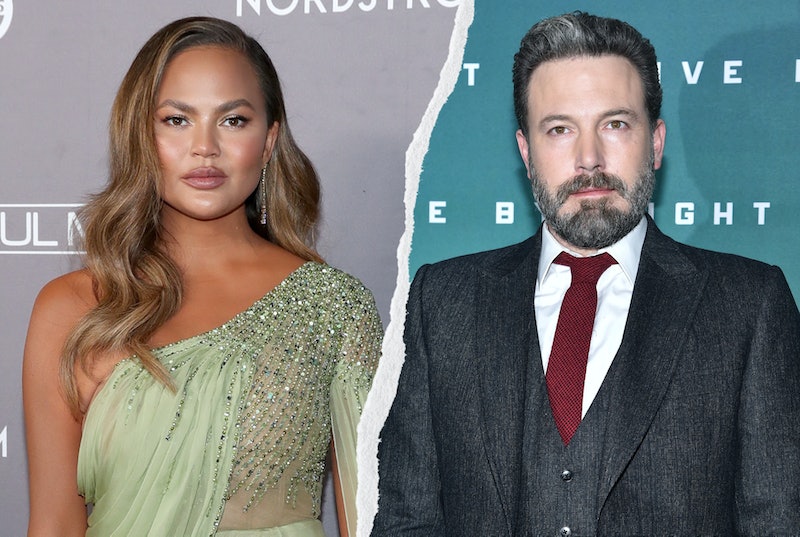 If there’s something that definitely wasn’t on our 2021 bingo card, it was Ben Affleck going viral for a video he sent a stranger on a dating app. The Justice League star made headlines earlier this week when a woman named Nivine Jay shared a video message on TikTok that she allegedly received from the actor on Raya. “Nivine, why did you unmatch me?” Affleck asked in the clip, attempting to prove he’s not a catfish. “It’s me!”

The video quickly made the rounds on the internet, and Chrissy Teigen took to Twitter on Thursday, May 6, to weigh in. “I agree celebs shouldn’t be making these creepy desperate video replies on raya but it’s tacky to release private messages,” the Cravings author wrote. “Ya both wrong, congrats.” And even though the Lip Sync Battle co-host didn’t name Affleck in her tweet, her followers knew exactly who and what she was referring to.

“Agreed. He needs to take a look at himself if he’s chasing down girls who unmatched him on Raya,” one person tweeted, adding that it “felt malicious” of Jay to share the clip with the world on social media. “Unless he was being inappropriate/harassing then sure call him out. It just seemed like he was desperate.” “He should’ve just let it go and she shouldn’t have posted that message,” someone else wrote. “They’re both dumb for it.” Several of Teigen’s followers agreed that both Affleck and Jay handled the situation poorly.

Unfortunately, Affleck isn’t the only celebrity who’s been outed for their questionable activity on Raya. Friends star Matthew Perry also went viral this week for a video that he allegedly sent a 19-year-old woman named Kate Haralson. At the time, he and his current fiancée Molly Hurwitz were reportedly on a break. “Am I as old as your dad?” Perry asked Haralson in the video, which she shared on TikTok.

In the caption, Haralson made it clear that she wasn’t interested in Perry at all. “When you match w Matthew Perry as a joke on a dating app and he facetimes you and plays 20 questions with you,” she captioned the post. Elsewhere in the clip, the actor attempted to be flirty. “Do you always play with your hair this much?” he asked. “I guess so,” Haralson replied, laughing.

When asked about the viral TikTok by Page Six on Thursday, Haralson said that she shared it because she wanted people to see how men in Hollywood “take advantage” of young women on dating apps. “A lot of people were saying I’m a bully and mean for posting this, and it made me feel kind of bad, but at the same time, I feel like a lot of guys in Hollywood are talking to all these young girls and it’s something that I think a lot of people should be aware of,” she said.

According to the news outlet, Perry asked if they could FaceTime each other shortly after matching. “I was not really thinking anything of it,” Haralson said, adding that she “never even really watched Friends.” “It kind of felt weird talking to someone my dad’s age and it just felt not right,” she continued. She also told Page Six that she’s since been in contact with Ray because of their similar circumstances and that Ray advised her to “ignore all the hate comments.”

Ultimately, Haralson decided to take her video down after recognizing that “a lot of people are going to take his side since he’s a celeb TV character.” “I just did it more for the joke of it, which sounds mean, but I didn’t think anything of it,” she added. “I thought it was more so innocent and harmless. Honestly, it’s not really OK for these older guys to be talking to such young girls.” Bustle has reached out to Perry and Affleck’s reps for comment and will update this story if we hear back.

More like this
Michael B. Jordan Tackled His "Public Breakup" With Lori Harvey On 'SNL'
By Brad Witter
Who Is Pete Davidson Dating? He & Chase Sui Wonders Got Caught Kissing
By Jake Viswanath
Paris Hilton & Carter Reum’s Relationship Timeline Includes A Surprise Baby Boy
By Bustle Editors
Everything You Need To Know About Kanye's Post-Kardashian Dating Life
By Bustle Editors
Get Even More From Bustle — Sign Up For The Newsletter
From hair trends to relationship advice, our daily newsletter has everything you need to sound like a person who’s on TikTok, even if you aren’t.