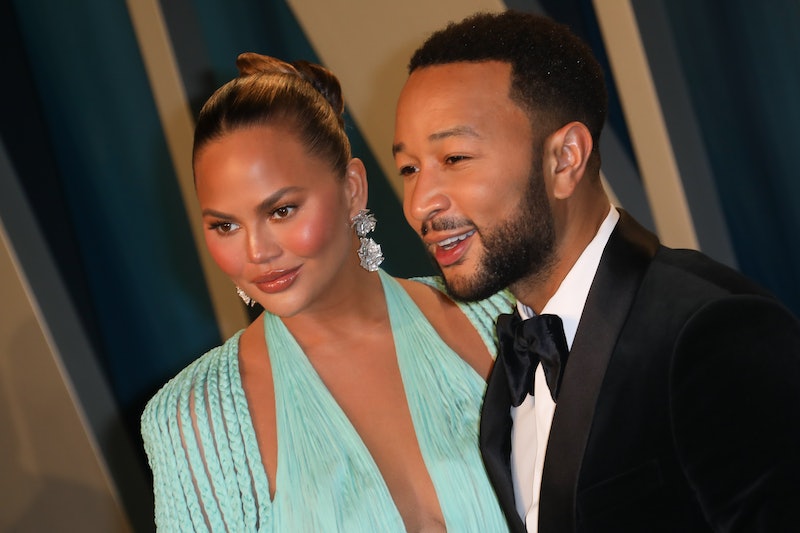 Chrissy Teigen thought her third pregnancy with husband John Legend would be smooth sailing, considering how easy her experiences carrying their first two children, Luna and Miles, ended up being. Unfortunately, as the Cravings founder is finding out, it's not that simple. Chrissy Teigen revealed that her third pregnancy is her most difficult yet, as she's been forced to go on "super serious" bed rest.

Last week, the former model announced that she had to go on "official" bed rest for two weeks. And while she was fully committed to taking it easy, apparently she didn't realize how strict bed rest can be. Taking to her Instagram Story on Tuesday, Sept. 15, Teigen admitted she hadn't thought that she had to take her doctors' orders so literally. "I didn't really know that bed rest was in bed," she told followers in a video. "I honestly thought bed rest was, you have to really, really, really relax, stay home. I thought it could be couch rest. But now I'm in trouble. Now I need bed rest."

She continued, saying that this third pregnancy was really showing her another, more "difficult" side of expecting. "I'm probably being punished for talking so much about how great the first two went," she joked. "I was like, 'Oh yeah, pregnancy's awesome!' But now I get it. I get anyone that thinks it's not so awesome."

Teigen conceded that she still felt good, and was "very happy" to be carrying her baby. However, as she expressed on Twitter, bed rest is not as relaxing as one might think. "Been in bed for all but 5 mins of the last 24 hours," she wrote late Tuesday night. "Lord it’s kind of crappier than it sounds."

This time around, Teigen has been very open about her pregnancy side effects, including painful headaches, which require Botox shots to alleviate. "I get really really bad pregnancy headaches," she tweeted on Sept. 4. "Thrilled to be cleared to do neck muscle botox along with a crazy combo of beta blocker shots and radio wave frequency something something doctor terms. Anyhow man it’s just so bad but I see the light finally." While Teigen did not reveal the exact reason for her bed rest, or whether it involved those headaches, she did say on Twitter last week that she planned to "learn how to sew capes and kid clothes" while resting. "Sh*t is about to get ... astonishingly ugly."