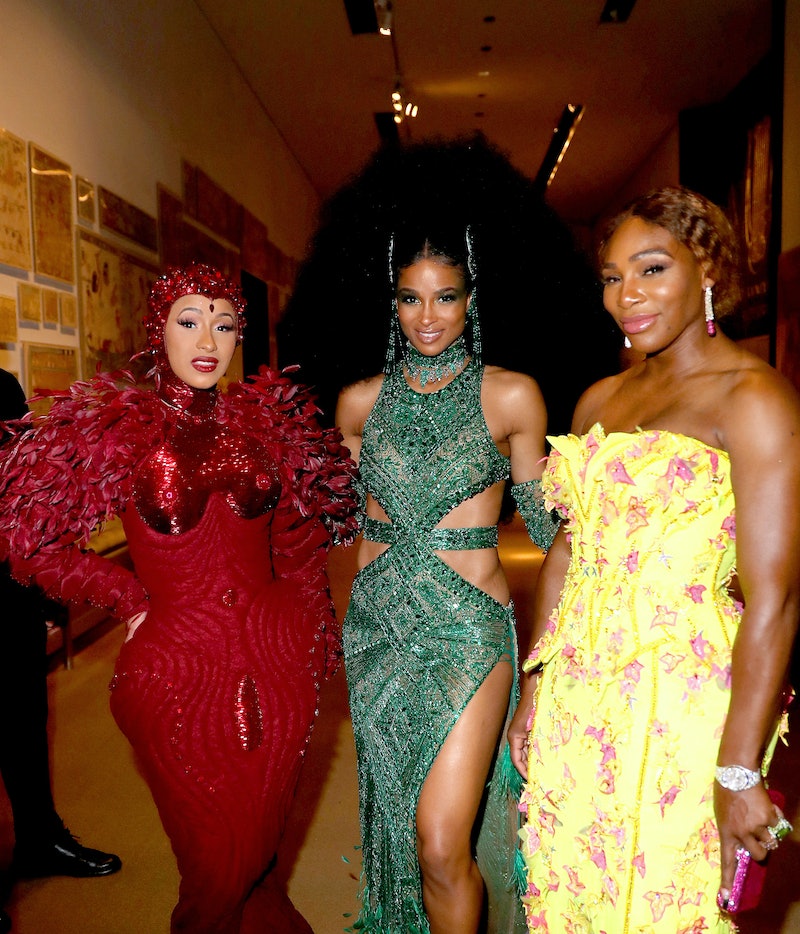 Halloween has only just begun, but Ciara may have already won the holiday with her Instagram ensembles. Ciara dressed up as Cardi B for Halloween, recreating the rapper's Invasion of Privacy album cover for social media, with her eldest son, 6-year-old Future Zahir, joining her as Offset. Wearing a bright yellow wig and a black-and-white checked suit, the singer recreated Cardi's iconic, tongue-out pose for the photo shoot.

"CARDI," Ciara captioned the post, encouraging fans to "swipe to the right" in order to see Future channeling the Migos rapper. On her Instagram stories, the singer showed off some more angles of her look, including her manicure, which included portraits of Joe Biden and Kamala Harris, as well as the word "VOTE." Ciara's story and posts were flooded with comments from fans and famous friends praising the look, but nobody was more delighted by her Halloween costume than Cardi herself.

"I’m gagging! I love it! I’m so hype!" Cardi wrote on Instagram, sharing the photos and a video of Ciara and Future rapping along to her song "Drip." The rapper continued by praising Ciara, revealing that she has always been a "huge fan" of the singer. "[I] became an even bigger fan after I met her! She is the most sweetest and the most nicest person in the world!" Cardi wrote. "A true peach! Staying sweet and humble was the prayer!"

Cardi B isn't the only female rapper that Ciara honored with a Halloween costume this year; the singer also dressed up as Megan Thee Stallion, recreating the cover art for her recent single "Girls in the Hood." In addition to rocking the rapper's pink, furry hooded ensemble and hoops that read "Hot Girl," Ciara also showed off her best Megan impression in a goofy video clip.

"Ah! Real hot girl sh*t," the singer said, before dancing around her closet to "Hot Girl Summer." Ciara wrapped up her trio of Halloween looks with a tribute to Nicki Minaj, rocking the iconic leopard-print ensemble she wore to the 2011 Grammys. "ONIKA," Ciara wrote on Instagram, along with a clip of her rapping Minaj's verse from their 2013 single, "I'm Out."

While neither Megan nor Minaj has commented on Ciara's costumes just yet, the singer has long been praised for her creative tributes to other female artists around Halloween. In 2019, she and husband Russell Wilson dressed as Beyoncé and Jay-Z, recreating the couple's "Apesh*t" music video with a portrait of Barack and Michelle Obama standing in for the Mona Lisa. "We just wanted to have a little fun and play a little respect to Jay-Z and Beyonce and then also we had the Obamas in the background so shoutout to them, too," Wilson told reporters in October 2019 about their own mini-music video.

"It was a good time," he continued, praising his wife for her commitment. "Ciara killed it. I did my best. That was pretty cool."

And like Cardi B, Wilson revealed that Beyoncé and Jay-Z also gave the couple's costume their own seal of approval. "Yeah we heard a little something [from them]. They loved it," Wilson said. "They were cracking up and just told us it was the perfect outfit, the perfect look."

More like this
The History Of Taylor Swift's "All Too Well" & What The Lyrics Actually Mean
By Jake Viswanath
The Meaning Of Steve Lacy’s “Bad Habit” Lyrics
By Radhika Menon
Jay-Z Is Performing At The Grammys, Meaning Beyoncé Might Actually Show Up
By Jake Viswanath
Adele Is Attending The 2023 Grammys, Thank You Very Much
By Jake Viswanath
Get Even More From Bustle — Sign Up For The Newsletter
From hair trends to relationship advice, our daily newsletter has everything you need to sound like a person who’s on TikTok, even if you aren’t.