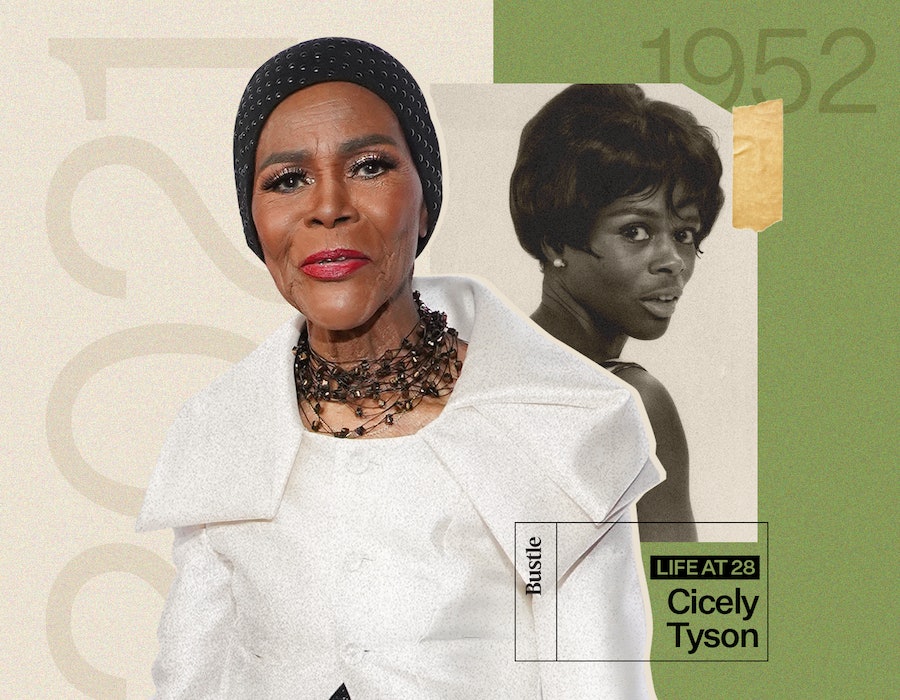 In Bustle’s Q&A series 28, successful women describe exactly what their lives looked like when they were 28 — what they wore, where they worked, what stressed them out most, and what, if anything, they would do differently. In one of her final interviews before her death on Jan. 28, actor and memoirist Cicely Tyson reflects on life in the 1950s, before she had her big break.

For decades, Cicely Tyson had a canned response whenever people asked when she was going to write a book. “I’d tell them, ‘When I have something to say,’” she tells Bustle with a laugh. And now, with the publication of her memoir Just As I Am, that long-awaited day has finally come.

But it's hard to believe that 96-year-old Tyson wouldn’t have anything to tell the world until now. From her Oscar-nominated performance in the 1972 film Sounder to her more recent work on Shonda Rhimes' How to Get Away With Murder, Tyson has portrayed a dizzying array of characters, often showcasing the strength, complexity, and resilience of Black women. But despite all of the multidimensional roles she’s taken on over her career, one has remained an enigma: Tyson herself. “I’ve been called the most mysterious person in show business, and I don’t know why,” she says, before beginning to speak about herself in the third person. “Everybody knows who Cicely Tyson is way up here with all the glitz and the glamour, but they don’t know anything about her from down here at the roots.”

So it's only fitting that Tyson's memoir begins at "the roots." In early chapters, she reflects on her early life, including when she was 28 and only just beginning to dip her toes into the world of modeling and acting. “I took life as it came to me,” she says of herself at the time. “I took advantage of everything it brought to me.” Below, Tyson reflects on being "nosy," following her instincts, and why she doesn't have a single regret.

Do you think I can remember when I was 28 years old? [Laughs.] I was already a mother, I worked as a model, and I worked for the American Red Cross as secretary to the assistant director. I was really busy. I was never a person to be inactive. Any time there was something that I could possibly learn anything from, it got me. I had a curiosity that transcended everything. My mother used to call me too nosy because I wanted to learn everything.

Modeling and acting are notoriously difficult fields to break into. How did you persevere at that time?

As I learned, you get nothing for nothing in this life! You’ve got to pay in some way — psychologically, spiritually, emotionally.

Looking back, what was the biggest risk you took when you were 28?

I followed my own instincts. You have to do that, because I learned [that when I wasn't] doing that, I go astray. I miss the mark. Whatever you think, follow it [instead of] what someone else thinks you should be doing.

You’ve kept quiet about your personal life for all of these decades. Why did you wait to write your memoir until now?

People wanted to know all about my personal life, and I said, "That has nothing to do with my acting." My personal life allows me to bring some kind of contribution to my career life. You have to have something feeding you. If you do not allow yourself to be fed by life, then you have nothing to give an audience. The characters that you read about come from a human life.

I have no regrets whatsoever. Every single thing that has touched my life has made me who I am today. So how could I regret anything? Look where I am!

More like this
At 28, Rosie Perez Risked Her Career To Stop Playing Stereotypes
By Gabrielle Bondi
At 28, Debra Jo Rupp Was Living A Much Different '70s Show
By Grace Wehniainen
Prince Harry Incorrectly Recites Christina Aguilera’s “Genie In A Bottle” Lyrics
By Jake Viswanath
Zach Reveals The Chaotic 30 Minutes That Were Cut From ‘The Bachelor’ Premiere
By Grace Wehniainen
Get Even More From Bustle — Sign Up For The Newsletter
From hair trends to relationship advice, our daily newsletter has everything you need to sound like a person who’s on TikTok, even if you aren’t.