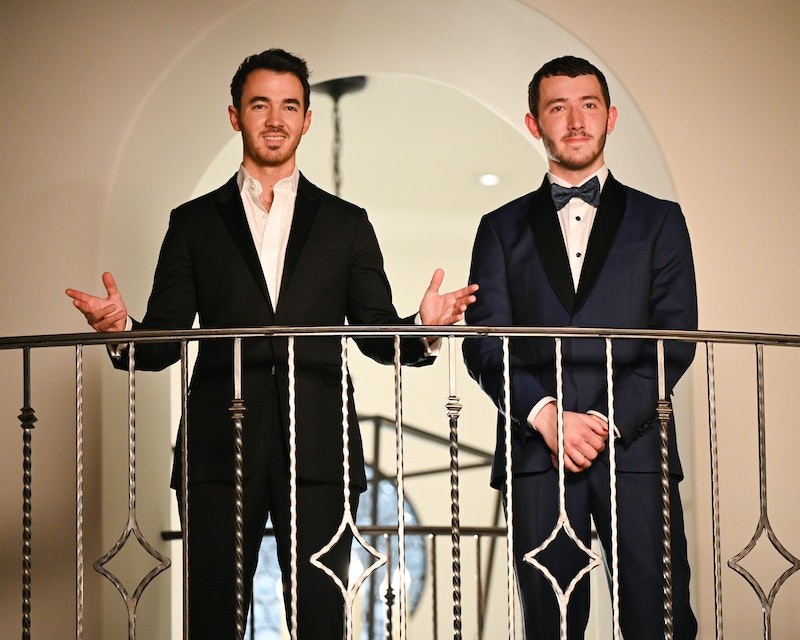 Name-dropping is off-limits in ABC’s new reality show, Claim to Fame. In the series, hosted by brothers Kevin and Frankie Jonas, 12 mystery celebrity relatives compete to conceal their identities while all live under the same roof. They also compete in various challenges, such as the July 11 premiere’s talent show, and form alliances — all while playing “DNA detective” to avoid eliminations and win the $100,000 grand prize. Viewers are as much in the dark as the cast is, and though some of the Claim to Fame relative identity reveals will be scattered throughout the episodes, others could remain secret until the finale.

“It’s a balance of how many people you reveal and who you reveal, and at the end of the day, I think that our decision really comes down to what’s the most fun way to tell the story,” executive producer and Kinetic CEO Chris Coelen recently explained to Variety. “It’s not really any particular rhyme or reason that we would reveal one person or another person.”

In the meantime, here are all the celebrity relatives that Claim to Fame has revealed so far.

Though no one in the house immediately guessed who she is related to, the July 11 premiere revealed “Amara” to be Whoopi Goldberg’s granddaughter, Amara Skye. The daughter of Goldberg’s only child, Alex Martin (with ex-husband Alvin Martin), Amara is described as a California-born “up and coming New York/ New Jersey based artist” and “granddaughter to an EGOT-winner” in an event listing for her first solo art show in July 2022. The post also notes that she aims to fuse the tones of graffiti and abstract art, and she starts every day by reciting her life motto: “Skeezy Does It.”

Given her undeniable resemblance to her famous sibling, it seemed to be no secret to anybody in Episode 1 that “Louise” is Simone Biles’ sister, Adria Biles — something she confirmed in a confessional. Their looks aren’t all the women have in common: Adria is a former gymnast herself and was reportedly attending dental school in 2020. “I’m so proud to have her as my sister,” Adria wrote about Simone in a December 2016 ESPN piece. “I look up to her in every way.”

After he was caught sneaking his cell phone into the Claim to Fame house, “Maxwell” was the first celebrity relative to be eliminated, at which point he was revealed to be Chuck Norris’ grandson, Maxwell Norris. The Fort Worth Star-Telegram featured Max and his fraternal twin sister, Greta, in a November 2017 article as star athletes in their junior years at Faith High School in Grapevine, Texas. Sharing the story on Twitter at the time, the Walker, Texas Ranger star wrote that he and wife Gena were “very proud” of their grandkids.

After “Brittany” revealed that her father is a Super Bowl champion and Hall of Fame quarterback in a confessional, it didn’t take long for her fellow contestants to put the clues together and figure out that she was Brett Favre’s daughter, Brittany Favre-Mallion. The elder of the former Green Bay Packers star’s two daughters with wife Deanna Tynes Favre, Brittany is now a mother of three and married to Alex Mallion. She graduated from Loyola University’s College of Law in 2015 when she was newly divorced from her first husband and raising two sons at the time. “The most important lesson I learned from my dad is that at the end of the day, you just have to put in the work,” the Hattiesburg, Mississippi-based attorney told Bleacher Report in 2015, adding, “Connections are a foot in the door, but I have to keep the door open.” After incorrectly guessing that Kai was related to Andra Day, Brittany was eliminated in Episode 4.

Before his elimination in Episode 3, several cast members had already figured out that “X” is Laverne Cox’s identical twin brother, M. Lamar. This isn’t the first time the artist has been on TV though: He previously appeared in Netflix’s Orange Is the New Black in scenes that depicted his sister’s transgender character, Sophia Burset, prior to her transition. On his website, M. Lamar, who holds a BFA from The San Francisco Art Institute and attended the Yale School of Art’s sculpture program (before dropping out to pursue music), describes himself as a composer who “works across opera, metal, performance, video, sculpture, and installation to craft sprawling narratives of radical becomings.”

For weeks, “L.C.” has kept her castmates and audiences guessing on who her celebrity relative could be. But finally, in an Episode 4 confessional, “L.C.” revealed herself to be Keke Palmer’s sister Loreal Palmer. The eldest of the four Palmer siblings, Loreal is also a big sister to twins Lawrence and Lawrencia. In a January 2022 Instagram birthday tribute, Keke called Loreal “one of the most talented and kindest people” she knows, adding that only a rare few know that she is “the true talent in the family,” thanks to her “Mariah Carey notes to Jim Carey hilarity.” The Nope star also shared that “best friend” Loreal, a wife and mother herself, has also offered to be a surrogate for her in the future, writing that “the love don’t get no realer than that!”

Dubbed the “Domfather” by her housemates, Dominique was eliminated in Episode 5 after “Kai” — with a major assist from “Logan” — correctly guessed that she was Reverend Al Sharpton’s daughter. In her parting speech, Dominique shared that she was proud of her father’s work as an “unapologetic” international civil rights activist and Freedom Fighter. The Brooklyn resident, who also has an acting background, followed in her dad’s footsteps as the membership director for the National Action Network. She also previously co-produced his syndicated radio show, Keepin' It Real with Reverend Al Sharpton.

This post will be updated as more celebrity relatives’ identities are revealed on Claim to Fame.