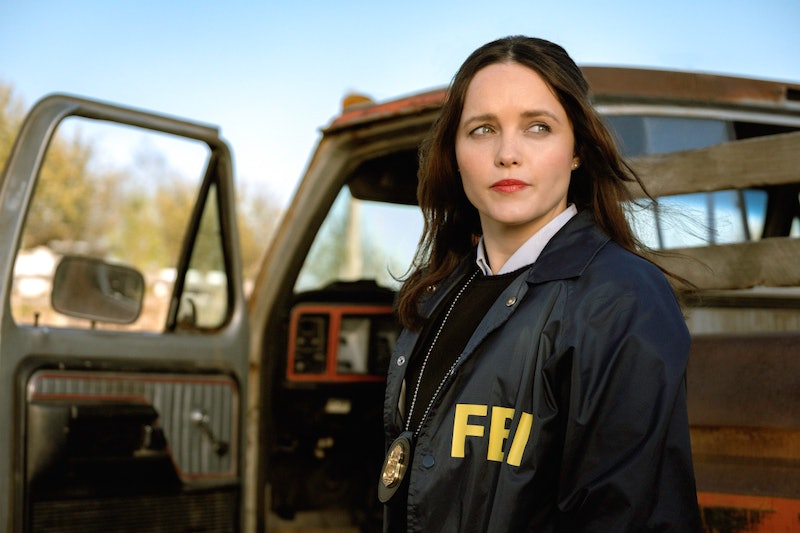 When CBS' Clarice picks up one year after The Silence of the Lambs movie, it will tell a story that TV hasn't had a chance to see yet. While NBC's Hannibal did feature some of Thomas Harris' famous literary characters (including Hannibal Lecter), the cast of Clarice will feature a different set of Harris' characters, many of whom NBC didn't have the rights for.

In addition to the titular Clarice Starling, Entertainment Weekly reported that fans can look forward to seeing Clarice's roommate and co-worker Ardelia Mapp and Deputy Assistant Attorney General Paul Krendler for the first time in decades. And it's worth noting that the CBS show also has the rights to serial killer Buffalo Bill, who's already been referenced in the show's trailer.

Executive producer Alex Kurtzman told EW that he was excited to feature these characters for the first time outside the books and movies that so often put Hannibal Lecter in the forefront. "It's been quite liberating because we have no interest in writing about Hannibal — not because we didn't love the films and the show, but because it was done so well by so many people that it didn't feel fresh for us."

Here's a guide to the characters that Clarice will explore instead.

The titular FBI agent is played by Rebecca Breeds. She said on The Talk that she was thrilled to dive into this complex character. "I think what's very exciting for me is that she's the hero of this story. We haven't heard her narrative. It's always been a very male-centric narrative," Breeds said.

Previously, the actor was known for playing Aurora de Martel on The Originals and Ezra's girlfriend Nicole on Pretty Little Liars.

Ardelia is Clarice's fellow FBI agent and also her roommate. Before playing Ardelia, Tyler appeared in The Purge series, Fear the Walking Dead, and Watchmen.

Deputy Assistant Attorney General Paul Krendler is Clarice's boss, and the two of them often clash. In the film, he didn't always have faith in Clarice's skills.

Prior to this role, actor Michael Cudlitz was best known for playing Abraham Ford on The Walking Dead.

Another agent on the force, Variety reported that Tomas Esquivel is equally suspicious of Clarice. And while he loves being an agent, he doesn't always love how the FBI approaches situations.

Lucca De Oliveira is used to working with CBS. Before Clarice, he played Vic Lopez on the network's show SEAL Team.

According to Deadline, Emin Grigoryan works with the FBI and has an expertise in archive work from his days as a curator for the Smithsonian. Actor Kal Penn told Deadline that he was a big Silence of the Lambs fan, and he loved getting the opportunity to play this character.

Viewers may recognize Penn from House, How I Met Your Mother, or the Harold & Kumar movie franchise.

Murray Clarke is a field agent who makes things tough for Clarice, according to the same Deadline article. He's played by Nick Sandow, whom fans may know from his role as Warden Joe Caputo in Orange is the New Black. He had a mustache in that show, so he looks a little different now.

In Silence of the Lambs, Catherine Martin was kidnapped by Buffalo Bill. The CBS show will no doubt explore the aftermath of that trauma.

This will be a pretty major role for actor Marnee Carpenter, who has previously held bit parts on series like Good Girls and Criminal Minds.

Catherine's mother is attorney general Ruth Martin. She's played by Jayne Atkinson, who's been in everything from Free Willy and Gossip Girl to House of Cards and Criminal Minds.

See how the cast tells the next chapter of Clarice's story beginning Feb. 11 on CBS.

More like this
Here’s What Happens To Bill & Frank In 'The Last Of Us' Video Game
By Brad Witter
Melanie Lynskey Plays A “Ruthless Leader” In 'The Last Of Us'
By Brad Witter
'That '90s Show' Is Officially Coming Back For Season 2
By Gretchen Smail and Grace Wehniainen
The Plane Crash In 'Dear Edward' Is Based On A 2010 Tragedy
By Grace Wehniainen
Get Even More From Bustle — Sign Up For The Newsletter
From hair trends to relationship advice, our daily newsletter has everything you need to sound like a person who’s on TikTok, even if you aren’t.