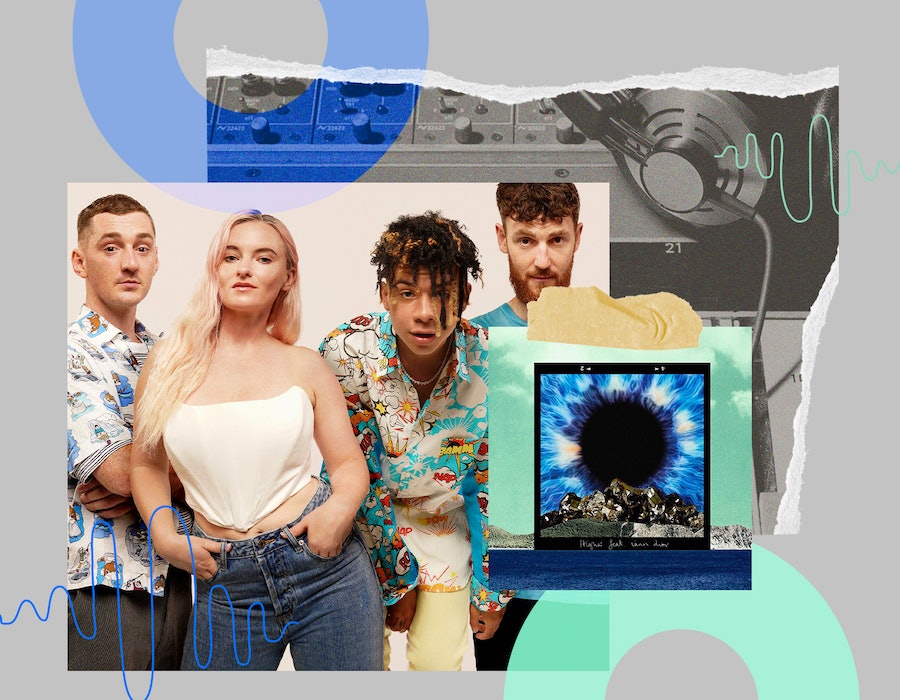 For Grace Chatto, making music has been a saving grace during lockdown. Despite finding lockdown "wearing," she says "I’m in good spirits at the moment, just because I feel so grateful to be able to put out music." She's talking specifically about "Higher," a brand new single Grace and her Clean Bandit bandmates Jack and Luke Patterson crafted alongside Puerto Rican-born American rapper and singer Iann Dior. She describes the song — penned by Bastille's Dan Smith — as an "uplifting" track that conveys the "intoxicating feeling of love."

Due to lockdown restrictions, part of the creative process behind the new track took place over FaceTime, with Dior in LA and Clean Bandit in London. This isn't the first time the band works with other artists remotely (they teamed up with Demi Lovato on "Solo" in 2018) and though Chatto acknowledges the technical drawbacks (the time delay is real), the trio were able to find some silver linings too.

"In general, the extra time we’ve had to work on production ideas has been really nice and calming, because normally we’re in a rush between concerts or festivals," says the "Rather Be" hitmaker. "Whereas this has been a very free experience creatively because we could just experiment for as long as we wanted."

Upon the release of "Higher" and ahead of Clean Bandit's hotly-anticipated third studio album (which is expected drop later in 2021), I spoke to Chatto about writing, musicians that inspire her, and what she's most looking forward to after lockdown.

On The Genesis Of "Rather Be" & Writing With Her Bandmates

Do you write as a band together, or do you work separately and come together to collaborate?

Often it starts with just random ideas. But, recently actually, we’ve been writing more together and we always collaborate with lyricists. Often the best songs come when we just sit together at the piano with the lyricists and songwriters — and just come up with stuff from scratch as a group and everyone just chips in with whatever comes to mind. Usually, the best songs have come like that, but in a really short space of time, like never more than a day for the actual writing.

Where’s your favourite place to write and compose music?

Well, Jack (Patterson) normally comes up with the initial ideas and he loves to be in motion. Like on a train or a plane. He often writes the best little ideas when he’s in motion, I find.

Tell me about the weirdest way a song ever came to be.

With "Rather Be" I remember watching Jack write that violin melody on the tube, we were on our way somewhere and he just had his laptop open, and he was using the laptop keyboard as a keyboard [Laughs], and just playing this melody. Then we just kind of made it into a song.

On Her Music Idol & Other Influences

Rihanna is my idol. Obviously she’s not putting out any music at the moment, so another idol is The Weeknd. I love what he’s been doing. "In Your Eyes" is my favourite song of last year, and that whole album and the videos just blew me away. I’ve always loved The Weeknd since that first EP, and he’s just always pushing boundaries, I think. And this record is like perfect pop music, but also so deep.

Who’s someone, dead or alive, you’ve always dreamed of collaborating with?

Prince, for sure. Mozart would’ve been fun to collaborate with [laughs]. Also Miley Cyrus, Sam Smith, and Lewis Capaldi. But Rihanna, mainly.

Someone hands you the aux cord: what’s the first song you're playing?

I only listen to Whoopty at the moment on repeat. So, I'd say "CJ" by Whoopty or "Digga D" by Woi.

My favourite album right now is Folklore, but it’s not really good car music... So, maybe The Weeknd’s After Hours.

What are some of your favourite musical trends from the past few years?

I love reggae mixed with super pop vocals, we’ve always been really into that. I mean, Ace of Base were pioneers of that and they were like the first band that I fell in love with when I was tiny. And we [Clean Bandit] tried to do something similar with "Rockabye" and our song "Come Over." I also love Dance Hall and Jamaican rhythms and sounds, also that Swedish pop vocal sound.

On Performing Live & Life After Lockdown

What part of performing live are you looking forward to most once lockdown is over?

Seeing people happy without their smiles covered. It’s just the best feeling, connecting with people in that unique moment where the sound and the energy is all connected. And also touring: it’s so nice to all be together and we always play loads of games after the shows, so I really miss that.

What’s the song you’re most excited to play live again?

I’m super excited to play "Higher" with Iann Dior because he’s incredibly charismatic. I know that from filming him for the video. We hardly had to give any direction, we’d just kind of say “go” and he’d just totally came to life with such compelling performance. I think being on stage with him will be really fire. And it’s new, so that would be fun, too.

Will lockdown and the pandemic influence your work in the future?

It's been an important year. Being forced to stop and be still, and reflect will definitely influence us going forward. Also, the global trauma will no doubt play into what we create next, I think. But also, we just always try to make uplifting bangers, so we'll try to make some of those.

More like this
Mimi Webb’s IRL Situationship Inspired “Red Flags”
By Catharina Cheung
Here’s How You Can Watch The Grammys 2023 In The UK
By Emma Madden and Catharina Cheung
All The Ways You Can Watch The Super Bowl In The UK
By Asyia Iftikhar and Darshita Goyal
This Girls Aloud x Sugababes Collab Still Hits All The Right Notes
By Sophie McEvoy
Get The Very Best Of Bustle/UK
Sign up for Bustle UK's twice-weekly newsletter, featuring the latest must-watch TV, moving personal stories, and expert advice on the hottest viral buys.