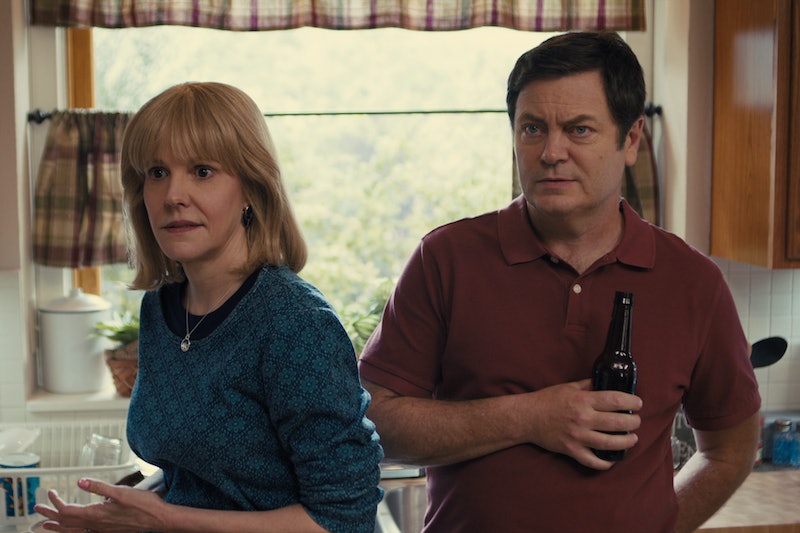 Netflix’s Colin in Black & White dramatizes the childhood of Colin Kaepernick, the former NFL quarterback turned activist known for kneeling during the National Anthem to protest police brutality. The series is narrated by Kaepernick and stars Jaden Michael as the high school version of him, but also introduces several formative figures in his life — namely his parents, Rick (Nick Offerman) and Teresa Kaepernick (Mary-Louise Parker).

Teresa, a nurse, and Rick, the vice president of operations for a cheese company, adopted a 5-week-old Colin after losing two sons at birth to congenital heart failure. In an interview with The Undefeated, Teresa remembers viewing him as the “perfect child.”

Four years later, the family — including Colin’s older sister Devon and brother Kyle — moved from Fond du Lac, Wisconsin, to Turlock, California. Colin in Black & White depicts how Rick and Teresa — who are both white — struggled to raise a biracial child in a predominantly white city. (Colin’s biological mother, who was 19 when she gave him up, is white; his father is Black.)

The Kaepernicks did what they could to affirm Colin’s racial identity, driving him across town to get cornrows when he was a teen and trying to nurture his confidence in himself. “I knew I was different to my parents and my older brother and sister. [But] I never felt that I was supposed to be white. Or Black, either,” Kaepernick said of his upbringing in 2015 interview with Mr. Porter. “My parents just wanted to let me be who I needed to be.”

Still, no amount of parental support can shield a child from the ills of racism, and Kaepernick endured plenty of it while growing up. “We used to go on these summer driving vacations and stay at motels,” he told Mr. Porter. “And every year, in the lobby of every motel, the same thing always happened, and it only got worse as I got older and taller. It didn’t matter how close I stood to my family, somebody would walk up to me, a real nervous manager, and say: ‘Excuse me. Is there something I can help you with?'”

Kaepernick’s parents continued to support him into his adulthood, as he rose in the ranks of professional football and became a public figure. Ahead of Kaepernick’s second season with the San Francisco 49ers in 2012, Sporting News published an article criticizing his distinctive arm tattoos. "NFL quarterback is the ultimate position of influence and responsibility,” wrote David Whitley. “[Kaepernick] is the CEO of a high-profile organization, and you don't want your CEO to look like he just got paroled.”

Afterward, the Kaepernicks denounced the article. “It annoyed me,” Teresa told USA Today. “You are categorizing this kid on something like tattoos? Really? … That’s how you’re going to define this kid? It’s pretty irritating.” Rick agreed: “Instead of saying that Colin does all these great things and donates his time to children, this guy is going to make him out like a gangster.”

Flash forward four years, and Kaepernick became embroiled in an even bigger controversy. In fall 2016, he kneeled during the national anthem for the first time, leading to widespread discussion and backlash about his right to protest on the field. The Kaepernicks silently supported their son for months before finally addressing the matter publicly. “Colin is carrying a heavy load and following a difficult path that he truly believes in. He is putting his entire future and possibly his life on the line for those beliefs,” Rick and Teresa said in a statement to the Undefeated. “As his parents, it pains us to read articles and tweets saying that his family does not support him; this could not be further from the truth. We want people to know that we are very proud of our son and admire his strength and courage in kneeling for the rights of others.”

In 2017, Kaepernick opted out of his contract with the 49ers and became a free agent after being told the team was planning to cut him. He hasn’t played since, leading to allegations that the league is blackballing him. Kaepernick ultimately sued the NFL for colluding to keep him out of the league and reached a confidential settlement in 2019. However, Colin in Black & White aims to portray him as more than just a football player.