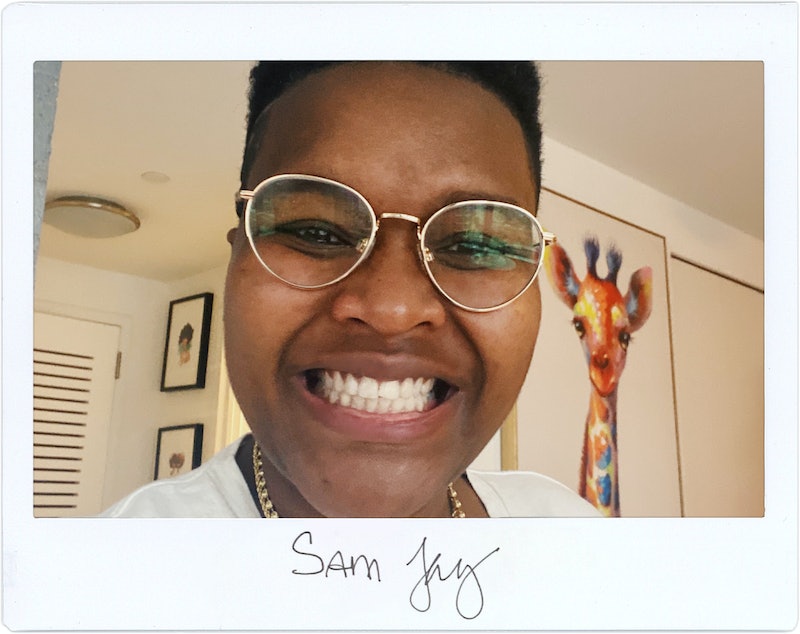 When celebrities (virtually) hang out with Bustle writers, we want to give them the chance to leave their mark. Literally. So we hand them a pen, a piece of paper, a few questions, and ask them to get creative. This time, comedian Sam Jay is leaving her mark in the Bustle Booth.

Sam Jay isn’t telling you to take mushrooms before visiting a museum, she’s simply maintaining that it makes the experience more immersive. “When I was a kid, I would drag my mother through museums [and be] like, ‘Why do you gotta read everything?’” Jay says. “Now, I'll get high and sit in the museum for hours and read every single thing.” A mushroom-induced trip to London’s British Museum — one spent marveling at the collections and the fact that “white people stole all this shit” — is among the topics the comic explores in her debut Netflix stand-up special 3 in the Morning, out Aug. 4.

More specifically, Jay laments the audacity of white people (who are seemingly always “preparing for some shit” but “won’t tell us what it is”) and liberals (who insist we’re “better than the president,” when “no, we’re f*cking not,” because “if we were, he wouldn’t be the president!"). While filmed in February prior to the mass protests against racial inequality sparked by the killing of George Floyd (not to mention the coronavirus pandemic), 3 in the Morning's commentaries about politics and race are acutely apt to this current moment. For Jay, politics and race inform her work in the same breadth that they inform her life as a queer Black woman. “It's a part of the experience here, especially when you're Black in America,” Jay says. “On top of that, being gay, I don't know how to move [through the world] without it informing my life in some way or another. I don't really have that privilege.”

In Jay's comedy, nothing is really off limits. “I don't really think about it in terms of, ‘Would [the audience] like this?’ It’s [more of], ‘Can I commit to this?’ If I can, I'm going with it,” she says. It’s been a successful model so far: Jay’s also a two-time Emmy-nominated staff writer for Saturday Night Live, a gig she’s held since 2017. She's still in awe of NBC’s wealth of resources for her outlandish ideas. “You come up with these ideas, like, ‘We're going to need a Batmobile, then three days later, you have it,” Jay marvels. “You're like, ‘We need a llama,’ and they're like, ‘Cool, we’ll get you one.’”

Get to know more about Jay, including her perfect karaoke song choice, in her Bustle Booth questionnaire below.

More like this
The Black Lotus Staff Has "Had Enough" In The 'White Lotus' Spoof From 'SNL'
By Brad Witter
Hailee Kaleem Wright's Topsy-Turvy Path From MTV To Broadway
By Samantha Leach
At 28, Rosie Perez Risked Her Career To Stop Playing Stereotypes
By Gabrielle Bondi
'The Crown' Season 6 Has Suspended Filming "Out Of Respect" For The Queen's Death
By Bustle Staff
Get Even More From Bustle — Sign Up For The Newsletter
From hair trends to relationship advice, our daily newsletter has everything you need to sound like a person who’s on TikTok, even if you aren’t.