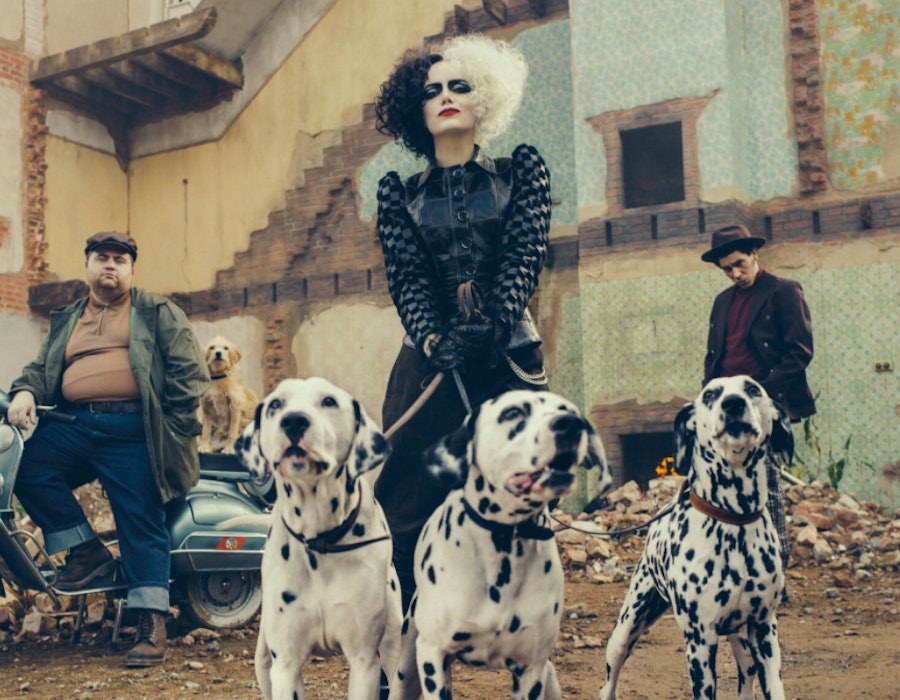 In 1961, the animated children’s film 101 Dalmatians, adapted from Dodie Smith’s 1956 novel, famously asked its young viewers the troubling question: What if a woman with two-toned hair wanted to kill and skin Dalmatian puppies to make coats?

The answer at the time was that Dalmatians and their well-meaning owners would simply band together to save their friends from becoming outerwear. Not much screen time was spent examining what terrible, overlapping factors might conspire to make a woman want to commit such horrendous and intimate acts of animal abuse. Cruella, the new Disney film starring Emma Stone, attempts to explore these questions, and introduces us to the girl Cruella De Vil was before she became the woman who wrought chaos on the lives of Roger and Anita and their sweet spotted dogs, Pongo and Perdita. It also offers up a hypothesis for why Cruella would go on to target Dalmatians in particular. A theory to which I have to say: Justice for Dalmatians!!

(Before I go any farther, a warning that there are some light spoilers ahead. If you want to go into your Cruella viewing completely fresh, I respect that. But I do hope you’ll spend the next few minutes reflecting on how, actually, there is no such thing as a bad dog.)

At the beginning of the film, we learn several very important and astounding things about Cruella De Vil: Her birth name is actually Estella (!), her signature black and white hair is all natural (!!), and her beloved mother was killed in front of her eyes when a trio of Dalmatians pushed her off a cliff (!!?!).

The scene is as confounding to watch as that sentence was to read. The three Dalmatians are the guard dogs of the Baroness, a diabolical haute couture designer played to frigid perfection by Emma Thompson. Though we don’t see much of the dogs, they spend much of the first half of the film either murdering or growling menacingly at party guests. “Aren’t they gorgeous?” the Baroness says to Cruella at one point. “And vicious. It’s my favorite combination.”

This portrayal conflicted entirely with the impression of Dalmatians I had gleaned from my personal experience of watching the animated film when I was little, and playing with my grandparents’ Dalmatian Zeno, who was occasionally gassy but always gentle.

Granted, Dalmatian behavior and characteristics are obviously more complicated and nuanced than what kids movies present. And like any breed of dog, these vary greatly from individual to individual. “That is very true of most breeds, but it’s very, very true of Dalmatians,” says Dianna Herschend, the owner of Olympic Dalmatians, a breeder in Texas.

While each Dalmatian has its own personality, the breed as a whole is known for its intelligence, loyalty, athleticism, and sense of humor. “They’re a clownish breed, they’re funny,” says Toni Linstedt, the Corresponding Secretary for the Dalmatian Club of America. Linstedt emphasizes their versatility as a breed: They can be therapy dogs, hunting dogs. They can do agility training. They’re great running companions. According to the early Disney films, they can disrupt a whole dog-skinning cabal. “They can pretty much do anything you ask them to do,” she says.

And they can be guard dogs. In fact, Herschend says, that’s part of what they were originally bred for. Centuries ago, Dalmatians used to run alongside carriages and guard them when the humans inside stepped away. “The modern day car alarm, in the old days, was a Dalmatian,” she jokes.

Dalmatians deserve better from everyone: filmmakers, potential owners, bad breeders, and especially from English fashionistas who try to take out their childhood trauma by stealing packs of their puppies.

These characteristics make them delightful companions who thrive in a household that’s able to give them enough attention, activity, stimulation, and discipline. Not everyone is able to provide that for a Dalmatian, though. And because Disney has made the breed so popular, it’s unfortunately common for people to get Dalmatian puppies they’re not equipped to properly care for, only to have the owners get overwhelmed by their puppies’ energy six months in and abandon them to shelters. The problem is so pervasive that those in the animal community have dubbed it the “Dalmatian effect.”

Not only that, but Linstedt says when the movies came out, the demand for Dalmatians became so great that there was more and more unscrupulous breeding happening in backyards and at puppy mills. Demand can so quickly outpace the responsible supply of Dalmatian puppies, that when a new film in the 101 Dalmatians Cinematic Universe is announced, like Cruella, many in the Dalmatian community immediately get worried.

“Those of us that are more careful about where we place our puppies, and trying to find them forever homes, we cringe, because we know that everyone is going to want a Dalmatian, and they’re just not suitable for everyone,” says Hershend. “I spend almost as much time talking people out of my puppies as I do advocating for them.”

By the end of the movie, the Dalmatians in Cruella are mostly redeemed (though not redeemed enough, presumably, for Cruella not to terrorize puppies of their breed later on, as we see in the original films). Still, it seems like Dalmatians deserve better from everyone: filmmakers, potential owners, bad breeders, and especially from English fashionistas who try to take out their childhood trauma by stealing packs of their puppies.