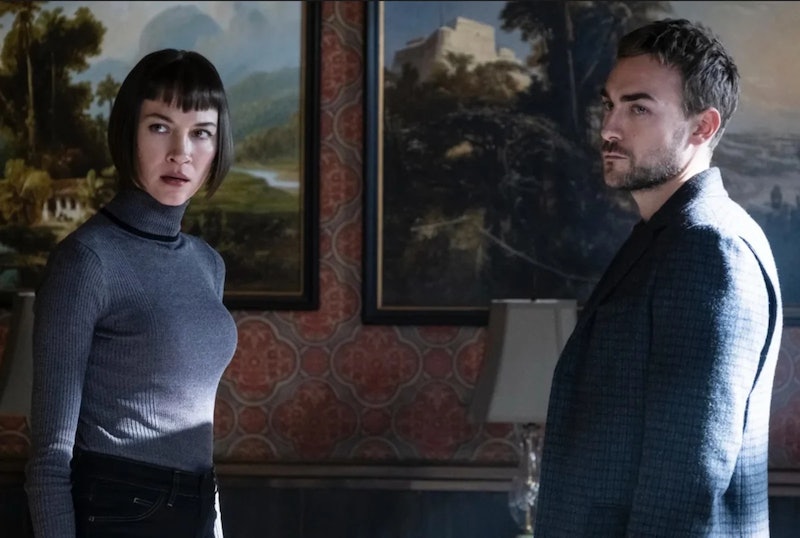 Helstrom is far from your average Marvel TV show. For one, the series doesn't even pretend to have any real connections to the Marvel Cinematic Universe. Secondly, its protagonists battle literal demons from Hell. Not exactly the type of stuff Peter Parker deals with in between classes (at least not in the movies). Daimon and Satana in the Helstrom comics have always existed on the fringes of Marvel's superhero universe, but even they are unrecognizable from their TV adaptations.

In the comics, it was Daimon Hellstrom (spelled with the extra "l" in the comics because subtlety is for suckers) who debuted first, appearing in the pages of Ghost Rider Volume 2, issue #1 in Sept. 1973 before headlining his own comic title weeks later. Daimon led the comic book Son of Satan, which was part of Marvel's Marvel Spotlight line from 1973 until 1975. Son of Satan then spun off from Marvel Spotlight to become its own independent title, but by then, the satanic hero's star was already fading. His solo title lasted just seven issues before being canceled. In these early appearances, Daimon was a demonic-powered superhero with a red cape, gold trident, and a pentagram on his bare chest. He was also half-human and half-demon, the son of a human mother (Victoria Hellstrom) and the devil himself, hence the very literal title Son of Satan. Daimon battled his father and his minions, trying his best to avoid following in his dear old dad's hellish footsteps. In other words, he was quite a bit different from the Daimon seen on Helstrom.

Daimon Hellstrom's presence in Marvel Comics peaked in the Bronze Age of the 1970s, when the brand was trying to produce edgier comics like the horror offerings The Tomb of Dracula, Werewolf by Night, and Man-Thing; the satirical Howard the Duck; and the blaxploitation-inspired Luke Cage, Hero for Hire. He did, however, make sporadic appearances over the next few decades. Hellstrom was a member of The Defenders, had a relationship with the hero Hellcat, and was an ally of Ghost Rider and Doctor Strange.

Ana Helstrom has made even less of an impact on Marvel Comics than her brother. On the page, she is known as Satana, and she first appeared in Vampire Tales #2 in Oct. 1973. She has usually been shown wearing red or black, and usually has horns of some kind. Unlike her brother, who was raised on Earth, Satana was mainly raised by her father in Hell. As a result, she has generally been regarded as more villainous than Daimon. She is also a succubus, capable of draining the souls of men. A San Franciscan auction house operator, she is not.

However, categorizing Satana as a straight-up villain would be wrong. She's more of an antihero, as the souls she sucks tend to come from evil men or abusers, and she has at times teamed up with heroes like Spider-Man and Doctor Strange. Her other hero work came when she was part of the headlining trio of supernatural women in Marvel's Charmed-esque title Witches, which lasted just four issues after its 2004 debut, and as a member of the former bad guy-filled superhero team, The Thunderbolts. To date, Satana's most notable Marvel role came in the pages of Thunderbolts, where she made regular appearances as a member of the titular team for a few years in the 2010s.

Satana hasn't crossed paths with her brother all that much in the comics, with the bulk of their interactions having taken place in Daimon's early '90s title Hellstrom: Prince of Lies and in the 2018 limited series Spirits of Vengeance, where they were both members of the titular supernatural hero team. Satana appeared in six of the 21 issues of the former and both appeared in all five issues of the latter, according to Comic Vine.

All of this is probably a surprise to you if you're a fan of the Helstrom TV show, because the comic book characters bear very little resemblance to their on-screen counterparts. That's nothing new — comic book adaptations are kind of notorious for changing their source material — but even longtime fans of the genre will be shocked at just how different Daimon and (Sat)Ana Helstrom are in the comics.