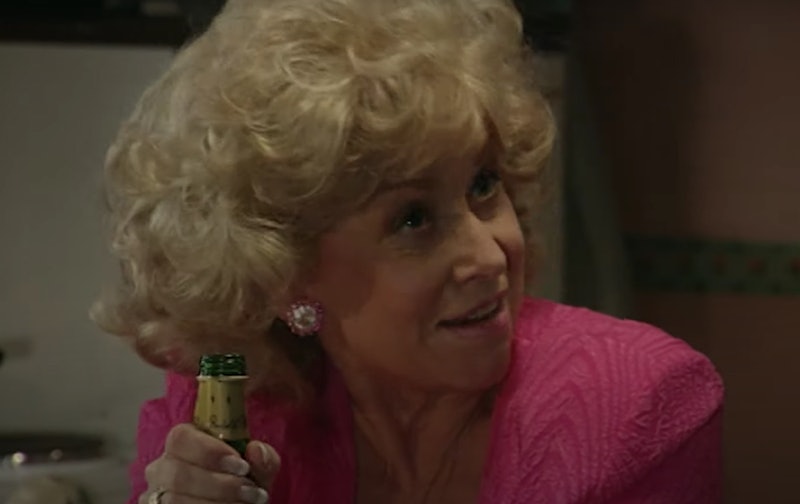 Tributes are pouring in for beloved actress Dame Barbara Windsor who passed away from Alzheimer's on Thursday (Dec. 10). The 83-year-old actor was best known for her legendary Eastenders' role Peggy Mitchell — the fiery landlady of Queen Vic with a strong right hook. Whether keeping her boys in check or yelling her classic catchphrase "get outta my pub," Peggy Mitchell produced many of the soap's most memorable moments and secured herself a spot in the hun hall of fame.

Windsor had a long and successful acting career and is one of country's most cherished talents. She notably starred as a saucy actor in the kitsch seventies Carry On Films before strutting onto Eastenders in 1994 alongside on-screen sons Steve McFadden (Phil Mitchell) and Ross Kemp (Grant Mitchell). Windsor continued to dazzle the nation until 2016.

Bustle has taken a look back at some of the actor's most iconic on-screen moments from her Carry On days to her most explosive Eastender's storylines.

*That* Carry On Bikini Scene

The Carry On films were racy enough for 2020 nevermind the seventies. Barbara Windsor appeared in nine of the comedy films as a saucy blond bombshell who often found herself in a pickle. There are many hilarious scenes to choose from (including Windsor in nipple tassels) and silly innuendos but we'll leave you with this.

BBC One is set to revive classic fantasy series Worzel Gummidge again this Christmas with a reintroduction to the much-beloved Saucy Nancy. But did you know Windsor starred in the original? Windsors played Saucy Nancy way back when in 1979.

There are few feuds as long as enduring as Peggy Mitchell vs Pat Butcher, and the battle of Eastenders' matriachs often got physical. Things got particularly heated on one faithful night in 1998 when the two came to heads over Frank, Peggy's husband who was also married to Pat for seven years beforehand. As well as delivering a pretty distinctive brand of East London insults – "You bitch!" "You cow!" – the pair also managed to break a couple of glasses and flip a table in the process.

The Peggy-Pat-Frank drama reached fever pitch when Peggy found out her husband was having an affair with his ex-wife and her arch nemesis. The scandal led to one of the most iconic Peggy Mitchell slaps of all: the double slap.

After sharing Frank's plans to leave Peggy with the entire pub, she delivered two powerful blows to the face. "Hope you all enjoyed the fireworks. Goodnight," she said before walking off. We certainly did.

Who could could forget Dirty Den's funeral when Peggy Mitchell delivered a slap so hard Chrissie fell into his grave? Dark? A little, yes. Epic? Absolutely.

One of the most legendary catchphrases in British television, it's impossible to talk about Peggy Mitchell without shouting "get outta my pub!" Peggy used this phrase too many times to count, but this one delivered to Pat just after calling her a "dirty rotten bitch" has to be one of the best. And, of course, who can forget when Peggy's line was used against her by Mick.

Peggy & Pat getting drunk in an ice cream van

More than a decade before becoming Prime Minister, Boris Johnson made a pretty surreal appearance on the famous soap. After claiming she was going to give the then Mayor of London a "piece of her mind," Peggy instead put on her best airs and graces when Boris turned up in the Vic. "I nearly went into politics myself, you know," she tells the Mayor.

When the Vic burns down

Windsor offered many stellar dramatic performances during her time on Eastenders and the Queen Vic fire is definitely one of the most memorable. The (quite literally) explosive episodes saw Peggy's drug-addled son Phil set fire to the pub, trapping Stacey (Lacey Turner) inside. Between a twisted murder plot and the Queen Vic up in flames, Peggy decided to leave Walford for good.

In 2016, Peggy Mitchell's health declines after she's given a terminal cancer diagnosis. In her final scenes on the show, we see Peggy hallucinating and talking to her old frenemy Pat. After 22 years on the soap, Peggy eventually says goodbye to the square, ending her life by overdosing on medication, uttering the line: "‘I will go as I have lived: straight back, head high, like a queen."