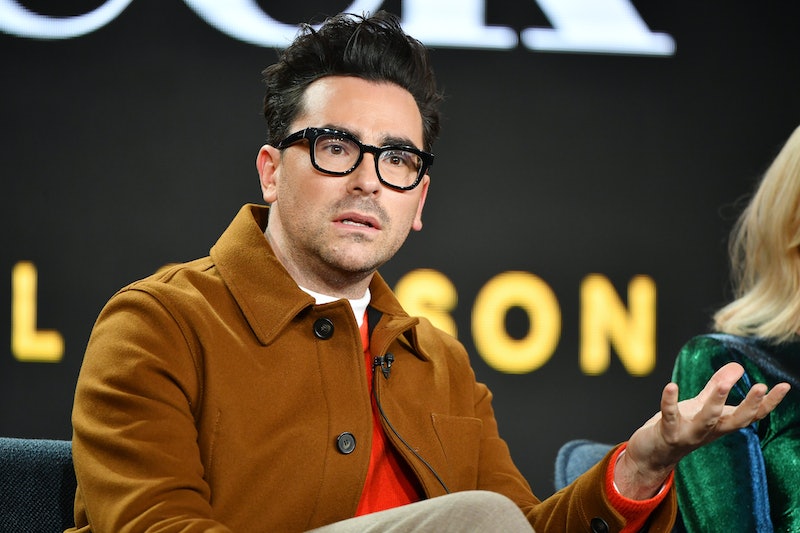 Schitt's Creek was unique in its ability to incorporate LGBTQ representation in a way that was seamless and unapologetic. However, apparently not all networks around the world are onboard with everything the show stands for. After a Comedy Central India clip of the show caught his eye on Tuesday, Oct. 6, Dan Levy called out the censorship of a Schitt's Creek gay kiss, saying that the omission was a "harmful" message against the importance of inclusivity.

Back in March 2019, Comedy Central India posted a clip on Twitter from a Season 5 episode of Schitt's Creek, where Ted (Dustin Milligan) jokingly kisses his girlfriend's brother, David (Levy), during a game of Spin the Bottle. But the video omits the actual kiss, jumping directly to the moments that follow — when Alexis (Annie Murphy) kisses her female friend Stevie (Emily Hampshire) and then turns to smooch David's boyfriend, Patrick (Noah Reid) — prompting backlash about the censorship of gay male sexuality.

Comedy Central India has yet to comment on Levy's message. However, many fans responded to the network's clip on Twitter, speaking out against the censorship, and agreeing that editing out the kiss was unacceptable and misses the point of the show.

Since its 2014 premiere, Schitt's Creek has been lauded for its casual inclusivity, especially when it comes to the LGBTQ community. Notably, Levy has been adamant that he explicitly refused to include homophobia in any major way in the show, steering clear of the trauma narrative so popular among projects that aren't about straight white people. "We show love and tolerance," Levy said in 2018.

Schitt’s Creek is far from the first show or film to be censored in more conservative countries due to LGBTQ content. The 2018 film Bohemian Rhapsody only had three minutes of gay scenes to begin with, and yet all were omitted when the film was released in China. And the fight for LGBTQ equality in India is ongoing. Gay sex was decriminalized in India in 2018, meaning there are no laws against showing LGBTQ content onscreen in India. However, other equal rights, including same-sex marriage and serving in the military, have yet to be legalized.

More like this
Here’s Where You Can Stream 'Schitt's Creek' After The Comedy Leaves Netflix
By Brad Witter
Pro Footballer Zander Murray Is "Blown Away" By Support After Coming Out
By Sam Ramsden
Bimini, Tia Kofi & More React To Cherry Valentine’s Death
By Catharina Cheung
'Grey's Anatomy's New Intern Got Advice From Dr. Bailey Herself
By Grace Wehniainen
Get Even More From Bustle — Sign Up For The Newsletter