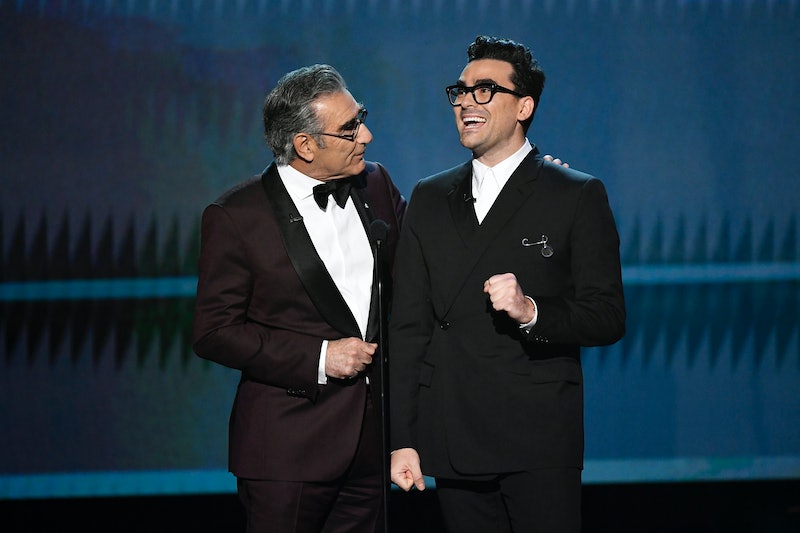 Schitt's Creek may have come to an end earlier this year, but the series is still receiving the love and praise it deserves, at least in the form of Emmy nominations. Shortly after the full list of contenders were announced on Tuesday morning, creator and star Dan Levy reacted to Schitt's Creek's 15 Emmy nominations in a short, heartfelt message that proves just how much this honor means to both him and the rest of the cast.

"Schitt's Creek has been nominated for a total of ~fifteen~ #Emmys," the official Schitt's Creek Twitter account posted on July 28. "We are currently trying to process this news. Thank you." Levy then retweeted the message, adding, "for once I am speechless."

Levy later posted on Instagram, sharing the Schitt's Creek graphic along with the message, "Well. This morning has been the most incredible surprise." He continued, "We are overwhelmed and filled with gratitude for this recognition. Unfathomably proud of our little show." Meanwhile, the official Schitt's Creek Instagram celebrated with a 2020 edit to one of the show's most iconic moment — the revelation of Moira Rose's favorite season, "Awards."

These 15 noms are an impressive jump from last year when the show only received a total of four Emmys nominations for the fifth season. But regardless of the exact number (or total number of wins in general), the cast is simply grateful to have the show recognized for such accolades in any capacity.

"Starting this show six years ago on the CBC in Canada, shooting in Toronto, we were isolated and didn't really realize when it started creeping into the States," Murphy, who played Alexis Rose, told Entertainment Tonight during a recent interview, reflecting on the show's 2019 Emmy journey. "To go from there to having the show and my fellow actors nominated for Emmys, it's so wonderful, because there were 150 incredibly talented Canadians working on this show and to have those talents and those people recognized at the Emmys makes me so proud."

More like this
'The Queen’s Gambit' Season 2 Tweet Wasn’t From Anya Taylor-Joy
By Mary Kate McGrath, Jack Irvin and Grace Wehniainen
Ashton Kutcher Wants Danny Masterson “To Be Found Innocent” In Rape Retrial
By Jake Viswanath
Netflix Shut Down 'Bridgerton' S3 Rumours About A “Very Dark” Storyline
By Bustle
Everything To Know About 'Only Murders In The Building' Season 3
By Gretchen Smail and Kadin Burnett
Get Even More From Bustle — Sign Up For The Newsletter
From hair trends to relationship advice, our daily newsletter has everything you need to sound like a person who’s on TikTok, even if you aren’t.