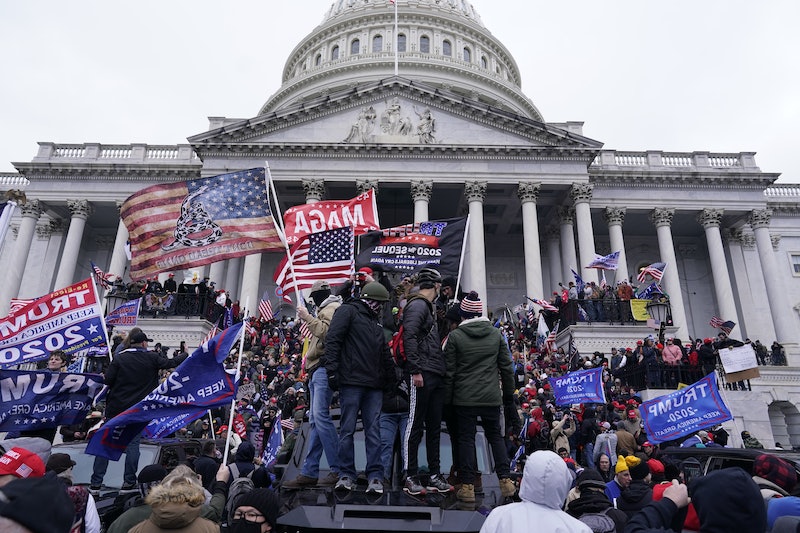 On Wednesday, Jan. 6, a mob of Trump supporters stormed the U.S. Capitol as lawmakers gathered to verify the results of the 2020 presidential election. The photos and video footage that surfaced online soon after the insurrectionists busted into the government building were jarring, to say the least — and celebrities immediately took to social media to condemn their actions and express shock and pain ahead of President-elect Joe Biden's inauguration on Wednesday, Jan. 20.

Michelle Obama took to social media the next day with a letter detailing the sudden shift in mood from the morning, when Reverend Raphael Warnock was elected as Georgia's first Black senator, to the afternoon, when white supremacists descended upon the Capitol. "My heart had fallen harder and faster than I can remember," she wrote. "Like all of you, I watched as a gang — organized, violent, and mad they'd lost an election — laid siege to the United States Capitol."

The former First Lady then detailed the awful behavior we watched play out on TV and pointed to the fact that unlike peaceful BLM protesters, these "gang members were led out of the building not in handcuffs, but free to carry on with their days." Michelle then wrote about how we move forward as a nation, saying that progress cannot be achieved until we acknowledge the reality of what occurred on Capitol Hill and that millions of people voted for someone who threatened our democracy. "The work of putting American back together, of truly repairing what is broken, isn't the work of any individual, politician, or political party," she continued. "It's up to each of us to do our part."

Comedian Sarah Silverman blasted Trump and his cronies for being noticeably quiet amid the uprising. "These people are answering a call by Trump, so where is he??" she wrote on Twitter. "Why isn't he addressing them? Where's @tedcruz and the other @GOP challengers?? THESE ARE YOUR PEOPLE YOU F*CKING ASS*OLES"

Director Paul Feig called to mind the familiar "but her emails" refrain used by Donald Trump during the 2016 election and throughout his presidency to push voters to doubt Hillary Clinton. It was also used to justify sending her to prison.

Actor Uzo Aduba wondered why there wasn't more security at the Capitol when tension is at an all-time high and considering armed protestors descended upon the Michigan Capitol in 2020 to denounce stay-at-home orders. "This is not over. And the blame sits squarely in the hands of this current President, his supporters, and all who have helped prop him up," she wrote. An hour later, she added:

Olivia Munn and Mia Farrow pointed to the discrepancy in how Black people and peaceful protestors are routinely met with more force and violence than the MAGA supporters who ambush government buildings and attempt to attack government officials. "The police were far more aggressive & swift in clearing away peaceful protestors for Trump photo-shoot with bible in front of church," Farrow wrote.

"These guys are engaging in hand-to-hand combat with police after storming the US Capitol," Munn tweeted alongside a video of the insurrectionists getting into physical brawls with law enforcement. "In other news, George Floyd, Trayvon Martin, Rayshard Brooks, Aura Rosser, Stephon Clark, Botham Jean, Alton Sterling and Eric Garner are all dead."

Schitt's Creek star Dan Levy retweeted a video taken from inside the Capitol and called out those captured in the footage for their privilege.

Alyssa Milano came through with screenshots from Trump's Twitter that prove how hypocritical this is.

Dionne Warwick encouraged everyone to pay close attention to everything happening today and what it means for our democracy.

Selena Gomez called out tech executives Mark Zuckerberg, Sheryl Sandberg, Jack Dorsey, Sundar Pichai, and Susan Wojcicki for "allowing people with hate in their hearts to use platforms that should be used to bring people together and allow people to build community."

Chris Evans, Gabrielle Union, Dwyane Wade, Cardi B, and Natasha Rothwell were also among those who blasted the double standard Americans of color face with law enforcement.

After tweeting the #RemoveTrumpNow hashtag, Kerry Washington shared some action items with her followers.

We will update this post as more celebrities weigh in on the day's events.

More like this
Everything To Know About Taylor Swift’s 10th Studio Album, 'Midnights'
By Grace Wehniainen and Jake Viswanath
The 'Reasonable Doubt' Cast Includes A 'Save The Last Dance' Reunion
By Grace Wehniainen
Alec & Hilaria Baldwin Gave Their 7th Child Another Version Of The Name Hillary
By Stephanie Topacio Long
Twitter Is Freaking Out Over Rihanna’s 2023 Super Bowl Halftime Show Announcement
By Stephanie Topacio Long
Get Even More From Bustle — Sign Up For The Newsletter