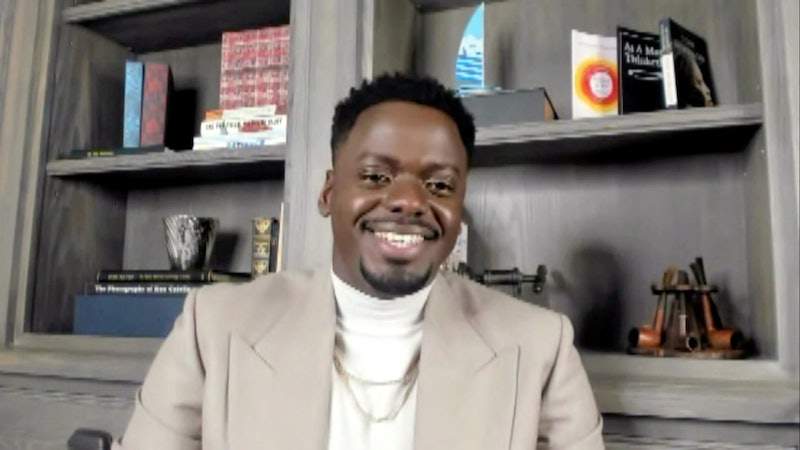 Daniel Kaluuya may have told the royal family to “get out” if he were in Meghan Markle’s shoes. Kaluuya’s SNL monologue on the show’s April 3 episode might make the royal family sweat, but it will surely make Meghan and Prince Harry chuckle.

The Get Out star opened his Saturday Night Live monologue by clarifying that he’s Black and British, joking that he is “what the royal family thought the baby would look like.” Obviously, he’s referencing Meghan and Harry’s bombshell interview with Oprah Winfrey, where they said a member of the royal family had conversations with Harry sharing concerns about the color of their son Archie’s skin. The couple refused to disclose the family member’s identity, with Harry only clarifying that it wasn’t his grandparents Queen Elizabeth or Prince Philip. But evidently, that didn’t stop Kaluuya and the SNL writers from getting in a good jab regardless.

Kaluuya went on to compare the difference between racism in the United States and the United Kingdom, joking that British racism was so bad that even “white people left” the country. “They wanted to be free — free to be able to invent their own kind of racism,” he quipped. “That’s why they invented Australia, South Africa and Boston.”

The episode marked Kaluuya’s first time hosting SNL, in promotion of his new film Judas and the Black Messiah. The actor has already taken home a Golden Globe and been nominated for an Oscar for his performance as famed Black Panther activist Fred Hampton. But rather than expanding on his acclaimed role, he chose to poke fun at his Golden Globes speech, which was muted and cut off by presenter Laura Dern due to technical difficulties before producers managed to fix the connection.

According to Kaluuya, viewers missed a very good joke. “Can you believe that?” he asked the audience. “I told the best joke of my life, and I was muted. I felt like I was in the sunken place,” he said, referencing his Oscar-nominated role in Jordan Peele’s horror flick Get Out. Hopefully Academy Awards producers won’t make the same mistake if he wins the Oscar as well.

More like this
Michael B. Jordan Tackled His "Public Breakup" With Lori Harvey On 'SNL'
By Brad Witter
Prince Harry Incorrectly Recites Christina Aguilera’s “Genie In A Bottle” Lyrics
By Jake Viswanath
Helena Bonham Carter Doesn't Think 'The Crown' “Should Carry On"
By Sam Ramsden
'The Crown' Season 6 Has Suspended Filming "Out Of Respect" For The Queen's Death
By Bustle Staff
Get Even More From Bustle — Sign Up For The Newsletter
From hair trends to relationship advice, our daily newsletter has everything you need to sound like a person who’s on TikTok, even if you aren’t.