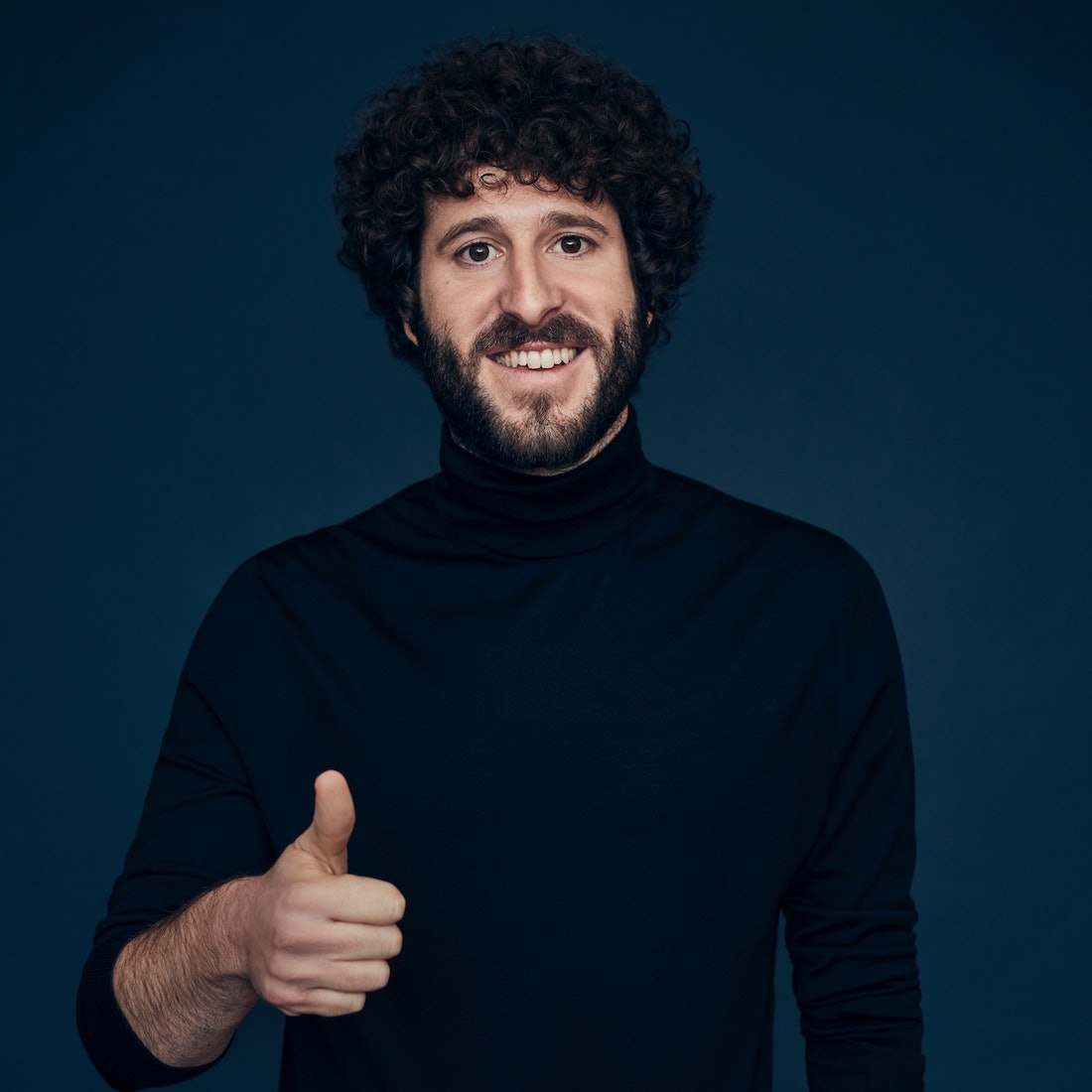 Dave Burd was taking a bath one night with a woman when she made an offhand remark that sent him into a tailspin. Surprisingly, it wasn’t a dig at his penis — a frequent punchline in the rapper-turned-actor’s comedy — but an even more sensitive subject: his back acne. “She was like, ‘Oh wow, you have a lot of body acne,’” Burd recalls. “And I was just like, ‘F*ck.’”

Despite making a career out of exposing his bodily shortcomings under the self-deprecating rap moniker Lil Dicky (his first-ever song was a treatise on his girlfriend’s ex-boyfriend’s anatomical superiority) even Burd wasn’t prepared for the jab in a literal moment of naked vulnerability. Yet here he is, recounting the story to a reporter, clearly delighting in oversharing each excruciatingly embarrassing detail. He may not be comfortable baring his back acne to his intimate partners, but he’s certainly unafraid to broadcast practices like spot-treating his breakouts to total strangers via his television series, Dave.

If Burd’s tangled urethra and hypospadias are the emotional core of his rap persona and thus the first season of his semi-autobiographical FXX show, Burd’s acne insecurity is Season 2’s malady of choice. And though many were surprised that a show about an anxious Jewish former ad man with a preternaturally good rap flow would become FX Networks’ most-watched comedy series, the man himself wasn’t. The series — and Burd’s own life, it seems — are ruled by two equal yet opposing forces: immense insecurity and borderline quixotic confidence.

“I really never feared failure. I fear extreme success, [because] I just know what I'm capable of,” 33-year-old Burd tells me over Zoom from Los Angeles, where he’s burritoed himself in a plush blanket. He switches from discussing Accutane (he started taking the notoriously aggressive acne drug over quarantine) to the future of his acting career ("Can I really play a schizophrenic in an insane asylum? Probably not... but I'm not going to rule things out”) with ease.

“I feel like the sky is the limit, and I very much enjoy my lifestyle,” he continues. “A guy like Will Smith, who I idolize, can’t just go to movies the way I like to go to the movies. And that's what I worry about, life-changing circumstances.”

“I really never feared failure. I fear extreme success, [because] I just know what I'm capable of.”

It’s a bravado that could be considered more cocky than charming if we didn’t know so much about Burd’s shortcomings, bodily and otherwise. At the beginning of Dave Season 2, the fictional Dave is hard at work on his first studio album. By all accounts he’s living the dream: the record label has put him up in a sprawling pad, he’s palling around with the likes of Kendall Jenner and Hailey Bieber, and he’s more famous than ever. But in reality he hasn’t penned a single track of said album, and the stress has triggered an OCD episode — something the real Dave also struggled with. “Every time I left my parents when I was a kid I had to kiss them right in the middle of their cheek and say, ‘I love you mom and dad. Drive safe, see you soon,’” Burd says of his childhood compulsions. While he mostly has these behaviors under control (save for some ritualistic tendencies surrounding SportsCenter) he knew that mining his experience with the disorder would be essential to his character’s development. “Making an album is very pressure packed, and for a neurotic man with tons of anxiety and a past history of OCD, it all can compound on itself,” he says.

Dave’s shots of empathy amid a steady stream of vulgarity extend to the show’s supporting characters, too. The Season 1 episode “Hype Man” centers on Burd’s real-life friend and stage partner GaTa and his experiences with bipolar disorder; the soulful meditation on the lack of mental health awareness in the rap community earned a spot on many year-end lists as one of the best TV episodes of 2020. But to tell his story, GaTa needed some convincing from his confident counterpart. “At first I was kind of hesitant. I don’t like being embarrassed, and I just thought that me sharing that personal story would be embarrassing,” GaTa tells Bustle. “Then Dicky told me, ‘Yo, it’s a beautiful story just to see how you deal with it and [have] grown as a person with all the challenges you face.’ It made me really feel good.”

Laying his life (and back) bare has had a similarly positive effect on Burd. “When I talk about [my penis] so openly, it's liberating,” he says. “A dick is a dick and all I care about is the perspective of my sexual partner.” He hasn’t yet achieved that same peace with his back acne. But he’s laying the groundwork, one joke at a time.