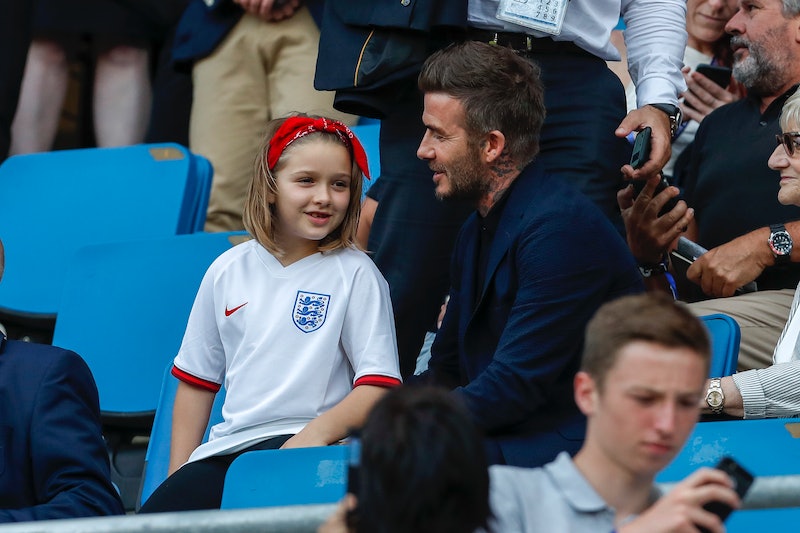 The Beckhams are hands down one of the cutest families in Hollywood and the day that Harper Seven was born, things got even more adorable. The arrival of the very first girl in the family happened in 2011 and, ever since, David has been the most doting dad to his beloved daughter. In fact, I’d go as far to say that these two are the cutest daddy-daughter duo around — and a recent Instagram post from VB proves it more than ever.

Victoria — who is currently in holiday in Italy with her family — shared the sweetest snap of David and Harper, who now look more alike than ever. The caption to the photo read: “Harper and daddy (with a major tan going on!!) x kisses @davidbeckham x” with the pic itself showing the two next to each other with matching blonde locks.

In the comment section, fans were in agreement that David and Harper are two peas in a pod: “Twinning with dad, so beautiful!!” wrote on follower. Another stated that, “Her and Brooklyn look sooooo alike,” showing the 10-year-old bears a striking resemblance not only to her father.

As well as Victoria’s cute photo, David also shared a lovely snap on his own Instagram page, with both Harper and youngest son Cruz.

“Special memories,” he wrote in the caption of the photo which showed him with his arms around the two children.

David and Victoria are currently on holiday in Italy with Harper, Cruz, and their own parents.

Harper recently celebrated her 10th birthday, with her family sharing well wishes on their respective Instagram pages. Eldest brother Brooklyn, for example, shared a series of images and wrote: “Happy 10th birthday to the best little sister in the world! You are the cutest I love you so much Harper!” Adorable.

More like this
Twitter Has Renamed Ekin-Su After *That* 'Dancing On Ice' Performance
By Sophie McEvoy
Harry Styles Just Split His Pants In Jennifer Aniston’s Face
By Sam Ramsden
What Really Happened Between Lea Michele & Sadie Sink On 'The Tonight Show'
By El Hunt
This Pre-'Love Island' Video Of Olivia & Zara Together Changes Everything
By Bustle UK
Get The Very Best Of Bustle/UK
Sign up for Bustle UK's twice-weekly newsletter, featuring the latest must-watch TV, moving personal stories, and expert advice on the hottest viral buys.