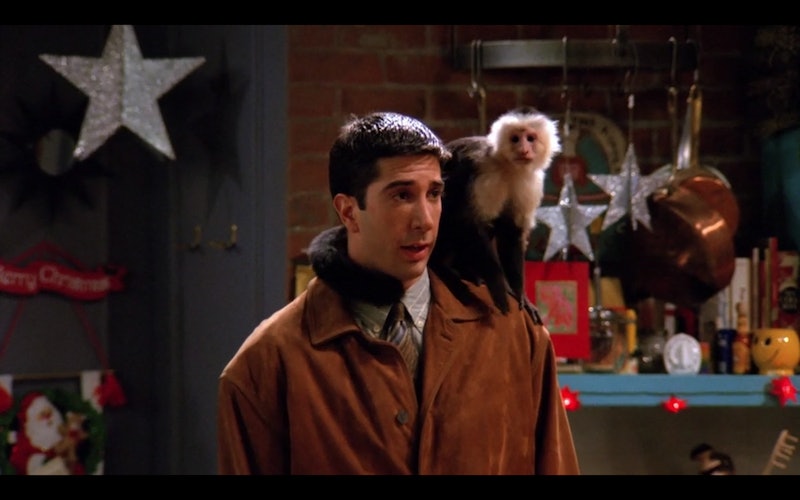 Not really — Marcel, introduced in the appropriately titled “The One With the Monkey,” only appeared in about eight episodes. (And was actually played by a female monkey named Katie.) For some fans he left an indelible impression. But in the Friends reunion special, David Schwimmer is ready to talk about full feelings regarding Marcel’s presence in Ross’ life.

“Here is my problem: The monkey, obviously, was trained. It had to hit its mark and do its thing right at the perfect time,” Schwimmer says in the new HBO Max Friends reunion, after reminding the crowd that he loves animals. “What inevitably began to happen was we would all have choreographed bits kind of timed out, and it would get messed up, because the monkey didn’t do its job right. So we would have to reset, we'd have to go again, because the monkey didn't get it right.”

Schwimmer also mentioned that in between takes the monkey would stay on his shoulder, at which point the trainer would bring over some food — live bugs — which would get spilled all over Schwimmer. “It was time for Marcel to... to f*ck off,” Schwimmer says.

Schwimmer’s disdain for the monkey playing Marcel is well documented. As early as 1995, in some of the first big press spreads the show was getting in Entertainment Weekly, Schwimmer did not mince words about how difficult it was to have a scene with Katie the monkey.

“I hate the monkey … I wish it were dead,” Schwimmer told the magazine. He explained that some of that was the difficulty of a primate coworker he had no relationship with. “The trainers won’t let me bond with it. They’re really, really possessive. It’s like, ‘Land on your marks, do your job, don’t touch or bond with the monkey.’ It’s a bummer.”

But that wasn’t a universal opinion. In the new reunion special, Jennifer Aniston says she liked the monkey, while Courteney Cox says the monkey scared her. And on a 2019 episode of Jimmy Kimmel Live, Matt LeBlanc shared that he liked the monkey (though he understood that Schwimmer “had to work with it the most”). “But I got along great with it,” LeBlanc said.

According to LeBlanc, Katie once escaped up into the rafters when they were supposed to shoot a scene, leaving the cast perplexed about when (if?) they’d be able to film at all. So while her time on the show was brief, it was certainly memorable.

More like this
Everything To Know About 'And Just Like That...' Season 2
By Jack Irvin and Grace Wehniainen
The 8 Best Aidan Shaw Moments On 'Sex And The City'
By Grace Wehniainen
Ashton Kutcher Wants Danny Masterson “To Be Found Innocent” In Rape Retrial
By Jake Viswanath
All The ’70s Easter Eggs You Missed In 'That ’90s Show'
By Grace Wehniainen
Get Even More From Bustle — Sign Up For The Newsletter
From hair trends to relationship advice, our daily newsletter has everything you need to sound like a person who’s on TikTok, even if you aren’t.