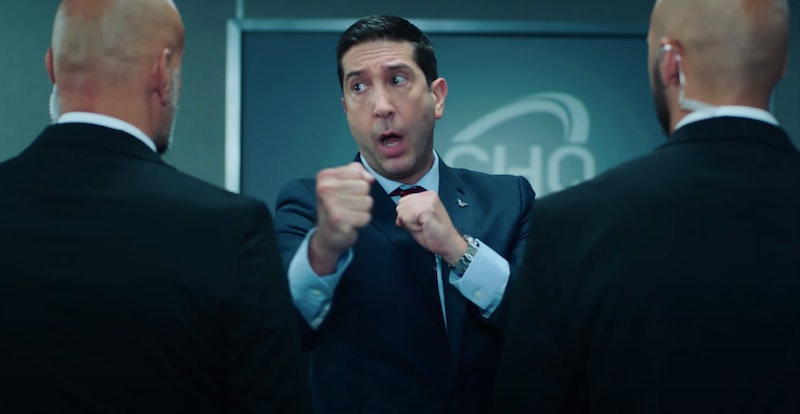 It's been 16 years since David Schwimmer last played Ross Geller on Friends. But if you're hoping his return to the small screen will see him retaining some of his most Ross-like qualities, think again, because David Schwimmer's Intelligence character is a significant departure from his most famous role.

In the comedic spy series Schwimmer plays NSA agent Jerry Bernstein, who gets recruited to work at a cybersecurity unit in London. However, what should be a seamless transition quickly descends into chaos as his pompous attitude and chauvinistic tendencies start to threaten the agency's overall initiative. Unlike Ross, who believed wholeheartedly in facts, science, and logic — sometimes to a fault — Jerry allows his ego to guide his decisions. He's vain, arrogant, and morally offensive on many fronts — in the trailer alone, he blatantly expresses how surprised he is to see that his new boss is a woman. And yet, it's his unlikable personality that drew Schwimmer to the role in the first place.

"I was really excited to play a guy like this because I thought there was a wonderful kind of challenge in it, in that he's not the most likable on paper," Schwimmer told NBC News. "The challenge was to take someone like this — an alpha male who is in power, who is arrogant, pompous, narcissistic, casually racist, sexist, homophobic and very patriotic, primarily because he's never been outside the country and speaks no other language — and make him funny."

Make no mistake — the show's intent is not to make Jerry out to be the hero or make his repugnant views or opinions seem understandable. On the contrary, Schwimmer hopes the series does the opposite by highlighting his character's ignorance to help viewers see how ridiculous he comes across.

"The joke is always on my character, so any racist or sexist behavior is coming from a place of such ignorance," the actor continued. "You never really believe anyone who's on the other end of that joke or behavior is ever really hurt or damaged or threatened by it. That's the key to all of it."

So while you may not come to love Jerry in the same way many Friends fans came to find Ross endearing, one thing seems quite clear: at the very least, you'll love to hate him.

More like this
'Bel-Air' Season 2 Finally Has A Release Date & A New Trailer
By Brad Witter, Kadin Burnett and Sam Ramsden
Casey Anthony’s Father Said He Was “Ready To Forgive Her” Before She Renewed Allegations
By Brad Witter
David Tennant’s Transformation In ITV’s 'Litvinenko' Is Astonishing
By Sophie McEvoy
The First Trailer For 'That '90s Show' Includes So Many Nods To The Original Series
By Jack Irvin, Alyssa Lapid and Grace Wehniainen
Get Even More From Bustle — Sign Up For The Newsletter