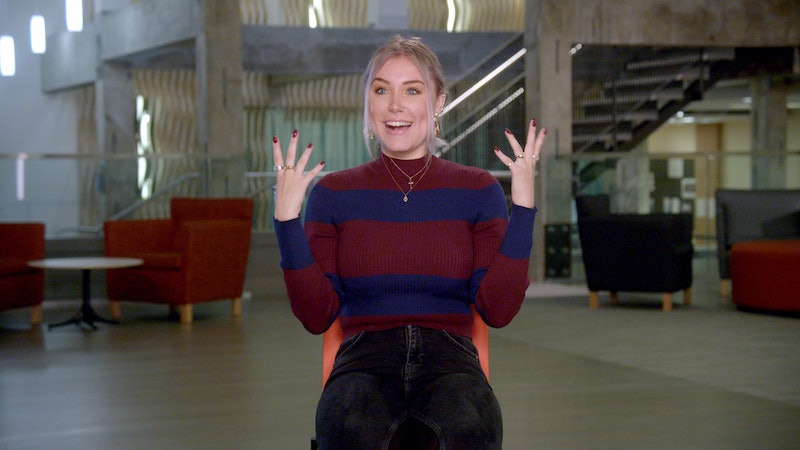 Deaf U is Netflix's latest reality TV venture, this time about a group of deaf and hard-of-hearing students at Gallaudet University in Washington, D.C. The series explores their everyday life as well as what it's like to be part of the Deaf and hard-of-hearing community. One of the Deaf U cast members, Cheyenna Clearbrook, learned almost as much about that as viewers will when she began attending Gallaudet University.

"More often than not, I would be with a hearing community. So going to Gallaudet and seeing an all-Deaf community was really a huge difference for me," Clearbrook told The Seattle Times. She added that she sometimes struggled identifying with the people who came from big Deaf families who'd had a lot of access to Deaf culture. "I do have a Deaf family, but we are from a mainstream school experience," she said, explaining that prior to attending Gallaudet, she'd done one year of Deaf school.

Although a full immersion into the community was new for Clearbrook, she's been helping to educate hearing people about Deafness for years. In 2018 she gave a TEDx Talk on the subject and how the divide can be closed between deaf and hearing people.

That wasn't her first time speaking to a large audience on video. Clearbrook has a successful YouTube channel with nearly 115,000 subscribers that she's grown in six years from featuring uploads of American Sign Language (ASL) versions of popular songs like Adele's "Lovesong" to include content like clothing hauls and travel videos. She also continues to have conversations on her platform about being deaf. As she explained in her TEDx Talk, she wanted to use her channel to help the hearing community learn more about the Deaf community and to help people in the Deaf community feel less alone.

Her Instagram is very much an extension of her YouTube personality, with lots of travel photos, street style shots, and the occasional post about being deaf. She also does #sponcon, because that's just what you do with almost 25,000 Instagram followers.

But she doesn't want to be your average influencer who simply takes pictures and shills products. She's dedicated to being a bridge between the hearing and Deaf communities, and she wants Deaf U to to help "break boundaries down for everyone" and show the reality of what it means to be deaf.

According to The Seattle Times, Clearbrook is now 21 and has left Gallaudet University for Washington State University, where she's studying humanities and plans to graduate in December. After that, she plans to continue to focus on her influencer career and maybe even expand into television or movie work. Wherever she goes, she'll bring her thousands of followers along with her.