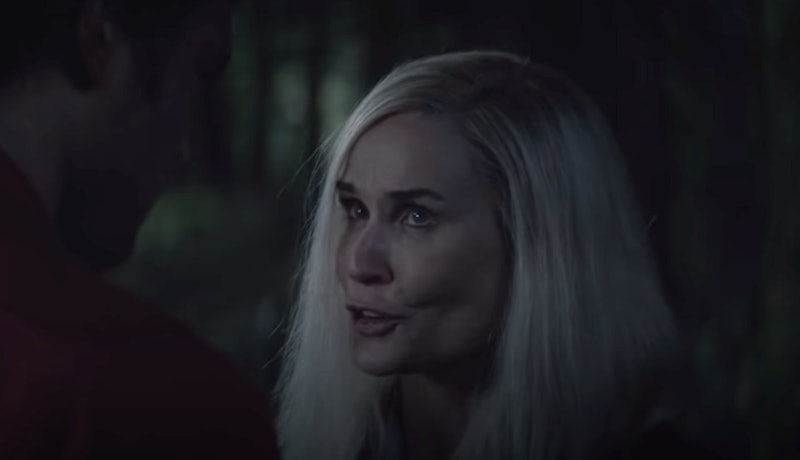 The series may center around a dystopian future, but Demi Moore's character in Peacock's Brave New World adaptation has a motive that's timeless: giving her son a better life, no matter what. Based on Aldous Huxley's 1932 novel of the same name, the show depicts the futuristic society of New London, which has established a new social order that bans monogamy, privacy, money, and family.

However, not everyone has been welcomed into this new way of life, including Moore's character Linda, a New London expat who lives as an outcast in the Savage Lands — the last existing remnants of the United States and the world's old social structure. So when the opportunity comes for her son John the Savage (Alden Ehrenreich) to escape to the new world, Linda encourages him to do so, even if it means saying goodbye, possibly for good.

"The character is the bridge between the two [worlds]," Moore explained to Entertainment Weekly. And while Linda's brash and somewhat cold demeanor may seem like a far cry from Moore's own personality, the actor connected to the role by embracing her own instincts as a mother. Linda's desperation to give her son a better life, she added, "is what every mother wants."

"There's no pain there, John. No fear," Linda tells John in the series trailer. "I want that for you." However, that may be easier said than done. Shortly after arriving in New London, John starts to disrupt the seemingly harmonious society with his old way of thinking, causing chaos and putting him in danger.

"People are doing everything they possibly can to avoid feeling pain," Ehrenrich told EW of New London's philosophy and the residents' reliance on Soma, a drug that keeps them happy and compliant. "New Londoners, to me, grew increasingly sympathetic in that they've just put in a place a lot of ill-advised tools to keep pain and fear and anxiety away. Of course, we all want do that, but there's avoiding it and trying to pretend it's not real and trying to find a way through it."

How ironic that the world Linda so desperately wants her son to be a part of could prove to be what leads to his ultimate undoing.

More like this
Everything To Know About 'The Real Housewives Ultimate Girls Trip' Season 4
By Jake Viswanath
Andy Cohen Apologized To Larsa Pippen After A 'RHOM' Season 5 Reunion Dust-Up
By Brad Witter
The Plane Crash In 'Dear Edward' Is Based On A 2010 Tragedy
By Grace Wehniainen
Netflix Shut Down 'Bridgerton' S3 Rumours About A “Very Dark” Storyline
By Bustle
Get Even More From Bustle — Sign Up For The Newsletter
From hair trends to relationship advice, our daily newsletter has everything you need to sound like a person who’s on TikTok, even if you aren’t.