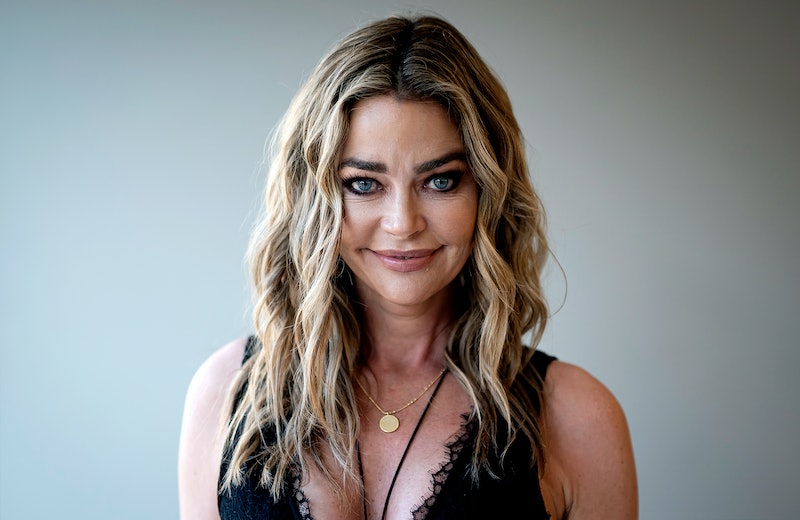 Beverly Hills just lost one of its brightest stars — or should we say, diamonds. Denise Richards is leaving The Real Housewives of Beverly Hills after two seasons. A representative for Richards confirmed to Variety that she will not be returning to the series, which isn't too surprising given she had a particularly tough season. Bustle has reached out to representatives of Richards and Bravo for further comment on why Richards left the show, but did not receive an immediate response.

Richards herself has not yet commented on the news, nor has she given a reason for her departure, but for viewers who tuned into Season 10, it seems like one of the most inevitable moves in the history of the franchise. The drama surrounding Richards has carried the season, with RHOBH leading ratings among cable shows on Wednesday nights, according to Variety, but most of the Housewives' storylines have been at her expense. Since the beginning of the season, Richards has been the primary target of her co-stars, other than Dorit Kemsley and newcomers Garcelle Beauvais and Sutton Stracke, with the ladies arguing that Richards was trying to control her image despite being very open with her sexuality last season.

Tensions increased when former Beverly Hills Housewife Brandi Glanville appeared on camera and claimed that she had a one-night-stand with Richards, who allegedly asked Glanville to hide the incident from husband Aaron Phypers. Richards has repeatedly denied the accusations both on and off-camera, but Glanville has maintained her story, even recently stating on the Sept. 9 episode of Watch What Happens Live with Andy Cohen that her and Richards were "more than friends."

The drama split viewers on social media, with many remaining loyal to #TeamDenise, some siding with #TeamBrandi, and many others thinking that Glanville was telling the truth (or at least, a version of it), but also disagreed with how Richards' co-stars were using the information to attack her when the situation had nothing to do with them. Stars Teddi Mellencamp and Kyle Richards, who were first told the allegations by Glanville, even faced accusations of homophobia for how they talked about the rumored affair.

In fighting back against the ladies, Richards provided some ground-breaking moments for RHOBH, which broke the fourth wall for the first time. She gave us the iconic quote "Bravo, Bravo, f*cking Bravo," a trick that former Housewives used to do in order to block the network from using footage they didn't want to air (spoiler alert: it didn't work for Richards). This season also saw a producer convince Richards not to leave a dinner with her co-stars, and revealed that Richards sent cease-and-desist letters to Bravo and crew members after the Glanville allegations were brought up on camera. Although she hasn't confirmed why she's leaving the show, her cease-and-desists (or Denise and Desist, as the show called it) prove that Richards will not put up with these potentially life-altering allegations.