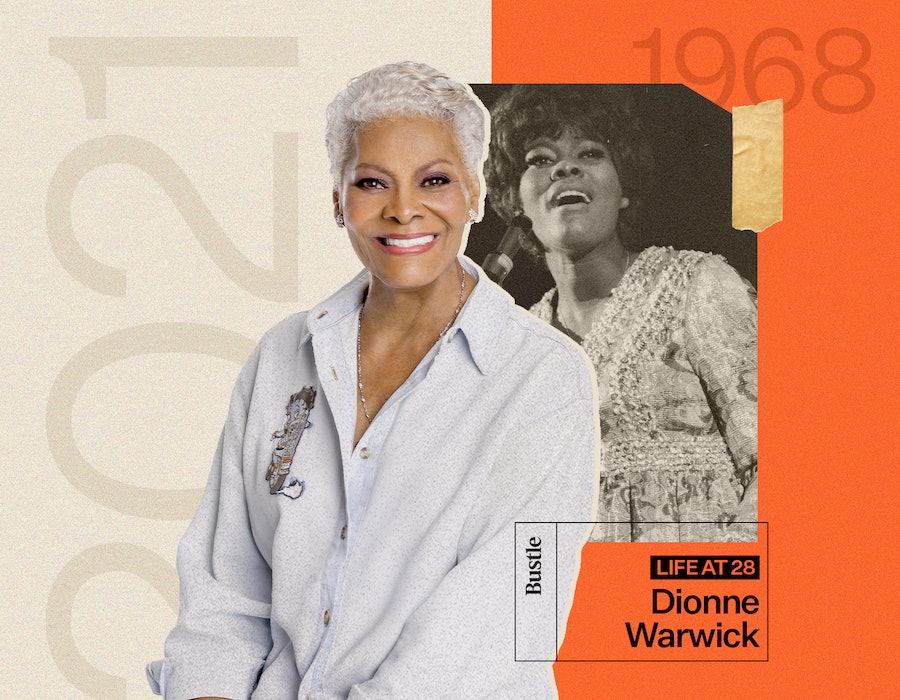 In Bustle’s Q&A series 28, successful women describe exactly what their lives looked like when they were 28 — what they wore, where they worked, what stressed them out most, and what, if anything, they would do differently. Here, Dionne Warwick talks her newfound Twitter fame, splurging on a Mercedes, and what her mom taught her about humility.

At 80, music legend Dionne Warwick is the new Queen of Twitter, where she jokingly takes aim at celebrities like Chance The Rapper and The Weeknd over their stage names and dryly remarks on the latest news in pop culture.

"People say that I missed my calling and should've been a comedian," Warwick tells Bustle of her newfound Twitter fame. Not that singing never got her anywhere: Warwick, who's best known for iconic hit singles including "Walk On By" and "I Say a Little Prayer," has toured the world and mingled with the likes of Ella Fitzgerald, Lena Horne, and Frank Sinatra while living an exhilarating life as one of the era's most-charted female artists.

Six years before scoring her first No. 1 on the Billboard Hot 100 in 1974, Warwick was a 28-year-old newlywed with one Grammy Award and 36 charted singles to her name. Her biggest splurge that year? "Oh, I did all the crazy things like purchase a Mercedes in cash. Who does that? Nobody. But because I had the money, I was going to spend it," Warwick says. "I was in the prime of life, so I was enjoying life very much."

Below, Warwick reflects on her days of haute couture, what life was like outside the studio, and balancing motherhood with her whirlwind career.

How were you feeling about your life and career in 1968, when you were 28?

28 was a good year; everything seemed to be pretty secure. I was constantly on the road, and if I wasn't on the road, I was in the studio recording. I didn't really have a moment to sit back and say, "Oh, look what's happening this year." But there was a great deal of enjoyment along the way, too. I'm from East Orange, New Jersey, and my first flight was to Paris, France. And from there to England, and from England to Germany — all of a sudden I was traveling the world. That in itself is something to think about and enjoy.

You were pregnant with your first child at 28. Were you worried that motherhood would affect your career?

I didn’t give thought to if my career would be affected. I worked during my pregnancy until it became obvious that it was time to come off the road. There was never a question as to what took priority.

On my rare days off, I spent time with friends that I still have to this very day — catching up on who got married, how many babies were being had, and all the stuff that you miss terribly when you're not around as much.

Do you have a favorite beauty look from that time?

It was an incredible period, fashion-wise. Those were the days of absolute couture. I wanted to look like the ladies of that era — Diana Ross and the Supremes, Diahann Carroll; they were fashionistas. The late Michael Travis designed specifically for me, which was quite something during that time, because that only happened to movie stars. He designed some of the most beautiful gowns that I’ve ever worn, so it’s hard to pick just one.

What’s one thing that stressed you out the most?

I haven't a clue as to what stress is. I just refuse to have that enter my space. Stress, I think, comes from reading or caring about what people say about you. I'm unbothered by it because I know who I am, and I like who I am. Spell my name right — that's all I want you to do.

Was there ever a point in your career where you feel like you made it?

Nope. Honestly, I think that once you've "made it," you might as well just hang it up.

What do you think has contributed to your staying power?

Humility. I'm reminded of a moment when I'd just come off the road. I'd had four, five, six hit records, but I was still living at home with my mom. On this day, I came home and she prepared chicken and dumplings, my favorite dish. We all sat down at the table, ate dinner, and conversed about the places I’d been. After dinner, I left the table, walked into the living room, and turned on the TV. My mom came into the living room and said, "OK, missy, those dishes have to come off the dining room table, and they've got to be cleaned." I got my butt up off that couch, went into the dining room, and cleaned the dishes [laughs]. So I've never had the inkling that my head could not fit through a doorway. My feet have always been planted.

You're a favorite on Twitter these days. Did you feel as comfortable speaking your mind when you were 28?

I've always spoken my mind. You can ask any of my friends from grade school on up. They’d say, "Don't ask Dionne if you don't really want to know the truth." It's an attribute more than anything else. It made me resilient to the point where no one could take advantage of me, which was especially important as a young woman navigating the music industry.

What do you think your 28-year-old self would think of your life now?

I believe she'd be proud. I'm exceptionally proud of my accomplishments. I've had a charmed life... everything that's happened has been preordained.