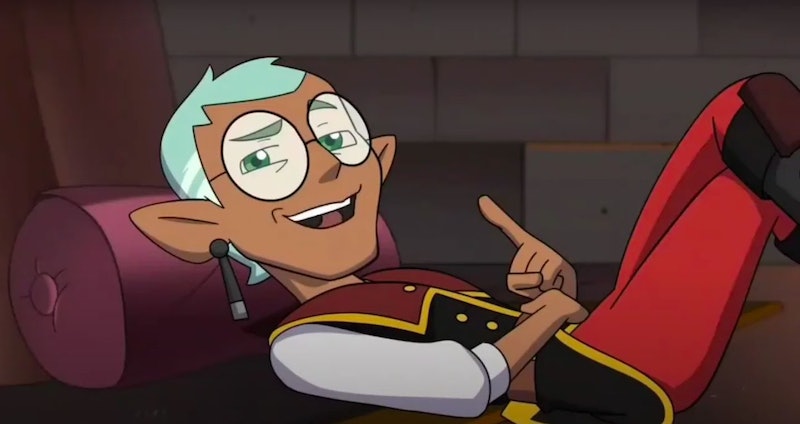 Disney has introduced its first-ever nonbinary character in The Owl House. Raine Whispers was featured in Episode 7 of the Disney Channel series (called “Eda’s Requiem”) and is voiced by Avi Roque.

The Owl House first premiered in January 2020 and is a fantasy comedy that follows Luz, a teenager from Connecticut who stumbles upon a portal to a magical realm and befriends a rebellious witch, Eda.

Season 2 of The Owl House premiered in July 2021 and, on July 24, viewers were introduced to Raine. Once their character was announced, Roque – who also identifies as nonbinary – tweeted, “Dream come true.”

Roque went on to explain more about Raine and their totally badass job. “I guest star as Raine Whispers (pronouns: they/them), the sharp and hardworking Head Witch of the Bard Coven, in the new episode of #TheOwlHouse premiering July 24 at 10:00am ET/PT on #DisneyChannel and DisneyNOW. Make sure to check it out!”

This isn’t the first time that The Owl House has been praised for its representation and inclusion of LGBTQ+ characters. Luz Noceda and Amity Blight are Disney’s first leading LGBTQ+ characters with a romantic storyline. The shows creator, Dana Terrace, confirmed that Amity is intended to identify as a lesbian, while Luz identifies as bisexual.

Their romantic relationship first became clear in an episode in which Amity expressed her desire to ask Luz to prom. On Twitter, Terrace said, “When I was first developing Owl House I always wanted to do a prom episode to make up for my own experiences. Back then PROM was an anagram for ‘Perennial Ritual Offering Maiden.’ I’m so incredibly grateful for the crew working to make this episode so badass.”