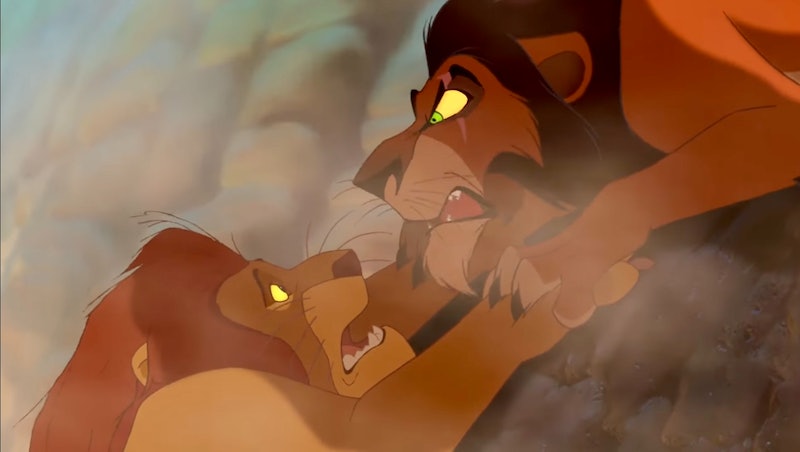 In Disney's 1994 animated classic The Lion King, the villainous Scar warned his hyena posse to "be prepared" for the death of King Mufasa. Well, nothing will prepare you for a new viral TikTok fan theory postulating that Scar ate Mufasa after he sent his brother tumbling to his doom. TikTok user ClassyKing0 (with an assist from fellow TikToker notalexislol) laid out the case for how the already-traumatic scene likely would have continued to play out in the actual animal kingdom, as BuzzFeed reports.

Wondering what happened to the body of Simba's late father, ClassyKing0 showed their research into whether or not hyenas eat lions, seemingly the most plausible explanation. As it turns out, though, not only do spotted hyenas (which is what Shenzi, Banzai, Ed, and their crew were) not feast on lion carcasses, no other animals seem to either — except maybe other lions, in an act of dominance. It's chilling, but isn't that on-brand for Scar?

If you think there is no way Disney would have even alluded to such a dark outcome in a beloved children's movie, ClassyKing0 added Exhibit B. In a later scene fans may remember, Scar can be seen holding a skull as a caged Zazu sings "I've Got a Lovely Bunch of Coconuts." The TikToker pointed out that said skeletal remains could be from another lion, namely Mufasa. Why? A simple Google image search showed that the skull Scar was holding looks an awfully lot like that of a lion.

Now, if you're feeling absolutely shook, you're not alone. The good news, however, is that this isn't the first time someone has suggested Scar kept Mufasa's skull as a trophy, and at least one person doesn't buy the theory. A January 2019 YouTube video from user B King examined various skulls from animals native to the African savanna, deciding that the one Scar was holding almost certainly belonged to a baboon instead. (Don't worry: Rafiki was very much still alive in this scene.)

Short of the '90s Disney filmmakers making a statement, there's no way of knowing what exactly happened to Mufasa after his death since everything would have happened off screen. So if you'd much rather believe Mufasa's less traitorous brethren carried him back to Pride Rock for an unaired "Circle of Life"-style funeral, well, hakuna matata.