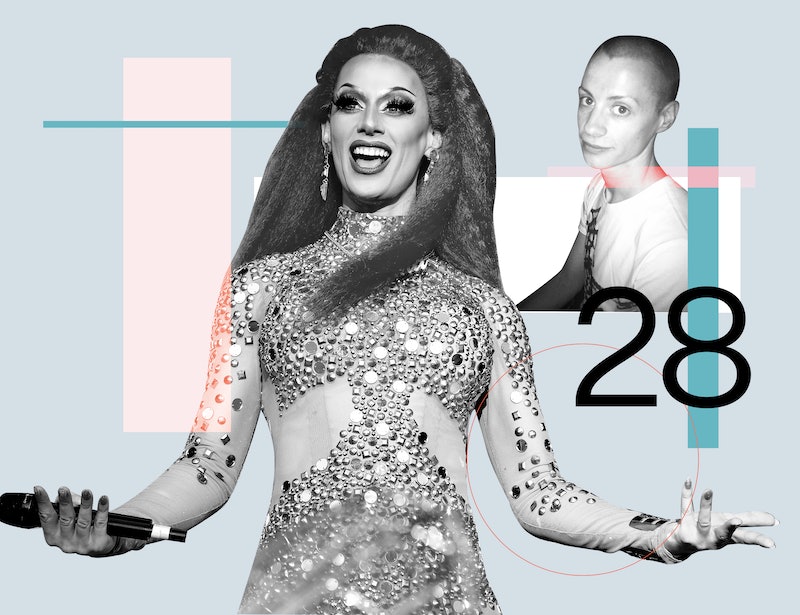 In Bustle’s Q&A series 28, successful womxn describe exactly what their lives looked like when they were 28 — what they wore, where they worked, what stressed them out most, and what, if anything, they would do differently. Here, drag royalty Divina De Campo shares how she was preparing to become the queen we now recognise from Ru Paul's Drag Race.

It's been more than a year since Yorkshire's own queen, Divina De Campo, first strut down the famous Drag Race runway. What followed was an (almost) winning stint on the hit franchise's first-ever UK spin-off, in which the already established performer won over viewers with whistle-tone vocals akin to Mariah Carey, and a catalogue of wig-snatching runway looks. Her couture laundry bag ensemble being a personal favourite.

"It's an extraordinarily pressured environment. And the way I sort of describe it is, it's like having your end of year appraisal every two days," she tells me from the comfort of De Campo towers, looking back on her RuPaul's Drag Race UK journey. The show earned the Brighouse-born artiste a legion of new admirers, but De Campo's newfound notoriety arrived just months before much of the world entered socially-distanced lockdowns. The pandemic brought the human contact that drag performance thrives on to an abrupt halt.

Thankfully, 2020 hasn't been too great of a set back for De Campo, and it's also allowed for some self-reflection on work-life balance. "It's been a really great time to reassess," she says. "Just working is not everything that life is about. You know, being successful is great, but you need to also spend it with the people that you love."

Between sold-out live streams and music ventures, including the Baga Chipz and Blu Hydrangea-assisted Frock4Life, De Campo has also carved out time this year to support causes close to her heart. Most recently, she's lent her voice to the Just Like Us #YoungerMe campaign, which encourages LGBTQ+ people in the UK to share powerful images of their younger selves, to highlight the importance of LGBTQ+ inclusive education. As a former teacher, De Campo understands the need for positive queer role models growing up, especially during school.

"I had a really sh*t time at school, and I'd kind of forgotten how sh*t it was," she says. "But I’ve done alright, and that’s the thing about the message to your younger self. Remember what it is that you want for your life, because we only have one. This [school] is only for a short amount of time. I think it’s really important for young people to hear that from people who’ve seen it, done it, bought the T-shirt, sold it, and bought another."

At the age of 28, De Campo says she had long overcome any adolescent insecurities, and was laying the groundwork for a career path that would lead her to become one of the biggest names in UK drag herstory.

I was in Stoke-on-Trent, and we had opened a night club called The Factory. I was working there every Friday and Saturday night. Friday night I was DJing and doing a quiz, and then Saturday night I would DJ and do a show as well. I was also doing four days teaching in a high school in North Wales. So, I was in quite a good place creatively. Financially, I was probably more stable than I had been for a good while. And I had met somebody who loves me, and we would’ve been planning to get married that year as well.

Did you have any specific goals at 28?

I was doing things which I was interested in. Focusing on just one thing has never really been my style. So I’ve always done lots of different things, constantly. While I was teaching, I was doing performing arts, dance, bits of music...

At 28, did you ever believe you’d be where you are now?

I mean, absolutely I was dreaming about that. The difficulty was we were in Stoke-on-Trent, so it didn’t matter how good, or how much work you put in, or any of that. Because very few people, relatively speaking, were ever going to see that. It’s a very closed circuit, but the audience were really supportive. They were very regular. They knew the show started at 10 p.m., they would be there half-past nine, which is great. As somebody who's working in there, it lets you know that you're doing the right thing. Because otherwise they just wouldn't turn up, would they? I always wanted to be doing a bit more with it, though. I feel like the world has a way of helping you, if you listen to it. Being in Stoke was really to teach me how to work an audience, and to produce a show. It gave me that time to do that.

What advice would you have given to yourself at 28?

Teach yourself a bit more about how to do your makeup. Even though I was being asked to do makeup tutorials, it's still something that needs more work. I think if I'd known earlier on that makeup was going to be much bigger — because it didn't use to be, 15 years ago, makeup wasn’t the major part of doing drag. It was the performance aspect of it, and how you interact with the crowd. The makeup has only recently become much more important in terms of the overall aspect of being a drag queen. So, I just hadn't focused enough on it, really.

Who were your role models at 28?

I've always looked at the people who've gone, like, way before. I was reading a lot about Danny La Rue, and about Lily Savage. The way that they'd worked, and the impact they'd had within the community, and show-business generally. It's always been those kinds of people I've been looking at, rather than people like Jeffree Star. I couldn't be less interested in someone like that.

What would your 28-year-old self think about you are now?

I think they would probably say, "You got a bit porky!" [Laughs.] That's probably what they would say.

More like this
Stacey Solomon & Joe Swash Have The Sweetest Relationship Timeline
By Orla Pentelow and Frances Stewart
At 28, Lesley Manville Was Acting, Picketing, & Singing Kate Bush Songs
By Olivia-Anne Cleary
Gemma Owen’s Swimwear Line Is The Real Winner Of 'Love Island'
By Frances Stewart
Gemma Collins' Net Worth Is Only Going Up
By Catharina Cheung
Get The Very Best Of Bustle/UK