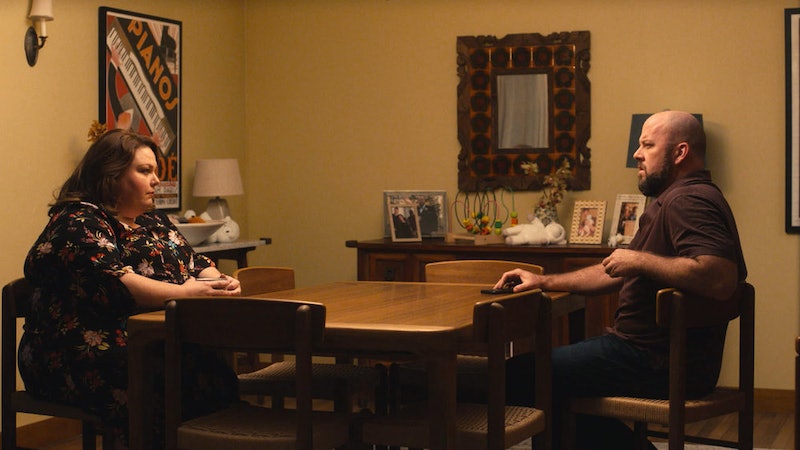 Spoilers for This Is Us Season 5, Episode 14. This Is Us fans have been speculating for years that Kate and Toby will wind up divorced, and in Season 5, the clues have only continued to pile up. While Kate went off to work and had a really fulfilling day in the May 11 episode, a still unemployed Toby stayed home to fix a plumbing problem — one that he had to call his dad to help him with. Toby is a really proud guy, so something as simple as not being able to fix the leak on his own really hurt his ego. Especially since, after it was fixed, Kate teased, “I should have never doubted you,” thinking it was only him who’d worked on it.

It was a small moment, but as Toby’s dad warned, even the smallest of leaks can ruin a home. “People only look for leaks where the water’s coming out, but it’s the pressure that’ll get ya,” he told Toby. The pressure in Toby and Kate’s marriage certainly seems to be building, and considering all the clues that point to their marriage crumbling, it may only be a matter of time before they split. Let’s review.

Kate Isn’t In The Flash-Forward Yet

Why didn’t Toby and Kate arrive together to see Rebecca? Toby mentioned having spoken to his son Jack about being on the way, but he doesn’t seem to be in direct communication with his supposed wife. Something just doesn’t feel quite right here.

Toby’s Not Wearing His Wedding Ring

One of the biggest hints at marital strife is that Toby isn’t wearing his wedding ring when he’s in bed in the flash-forward. As with everything on This Is Us, that detail is likely intentional. “We know our fans, and that they watch really carefully, and we make our decisions really carefully, so people are noticing the right things to notice,” executive producer Elizabeth Berger told Entertainment Weekly after the scene aired. Added executive producer Isaac Aptaker: “You could read that he’s no longer married. You could also read that it’s uncomfortable to sleep in a ring.”

Kate & Toby Are Quick To Lie

Though sometimes Kate and Toby lie to each other to protect the other person, it’s not a healthy pattern they’ve developed over the course of their relationship. In the May 11 epsiode, they both lied to each other again. Kate said her day at work wasn’t anything special (she had a big breakthrough moment with her mom), and Toby said the leak was easy to fix when in reality he had to rely on his dad to help him. They were small lies, yes, but it shows that they don’t feel like they can be honest with each other — even when it’s just talking about a great day at work or admitting that a DIY project was more challenging than they anticipated.

Kevin May Unintentionally Drive A Wedge Between Them

After Kevin found out that Toby lost his job, he talked to Kate and made her promise to come to him if her family ever needed money. Kate promised, even though such a promise is against what the very independent Toby wants. Kate hasn’t taken anything from her brother yet, but if Toby finds out she has considered it, he may not be able to handle that kind of a blow to his ego.

This quote from Chris Sullivan in a 2019 New York Post interview is pretty damning for Kate and Toby. “At that point Kate and Toby are no longer married,” he said about the flash-forward. “Who knows why that could be? Clearly [Toby] is still in communication with Kate and Jack. There are a lot of reasons why marriages don’t continue. The [show’s] writing staff hasn’t told us exactly what that situation will be but I think, either way, there are a lot of lessons to be learned.”

Perhaps the writing has changed since Sullivan first said this, or maybe he mistakenly thought it was a done deal, but that’s definitely not a great sign. Kate and Toby have made it through rough waters before, most recently when Toby had a hard time connecting with their son Jack. But even if they get past this bout of unemployment, something else come between them. Whatever is to come, things aren’t looking good for their future.

More like this
Pamela Anderson’s Dating & Marriage History Could Be Its Own TV Series
By Jake Viswanath
'The Last Of Us' Episode Schedule Competes With The Super Bowl & Oscars
By Brad Witter
Grammys Host Trevor Noah Made Adele's Dream Of Meeting The Rock Come True
By Brad Witter
Pedro Pascal Barely Got Through The "Lisa From Temecula" 'SNL' Sketch
By Stephanie Topacio Long
Get Even More From Bustle — Sign Up For The Newsletter
From hair trends to relationship advice, our daily newsletter has everything you need to sound like a person who’s on TikTok, even if you aren’t.