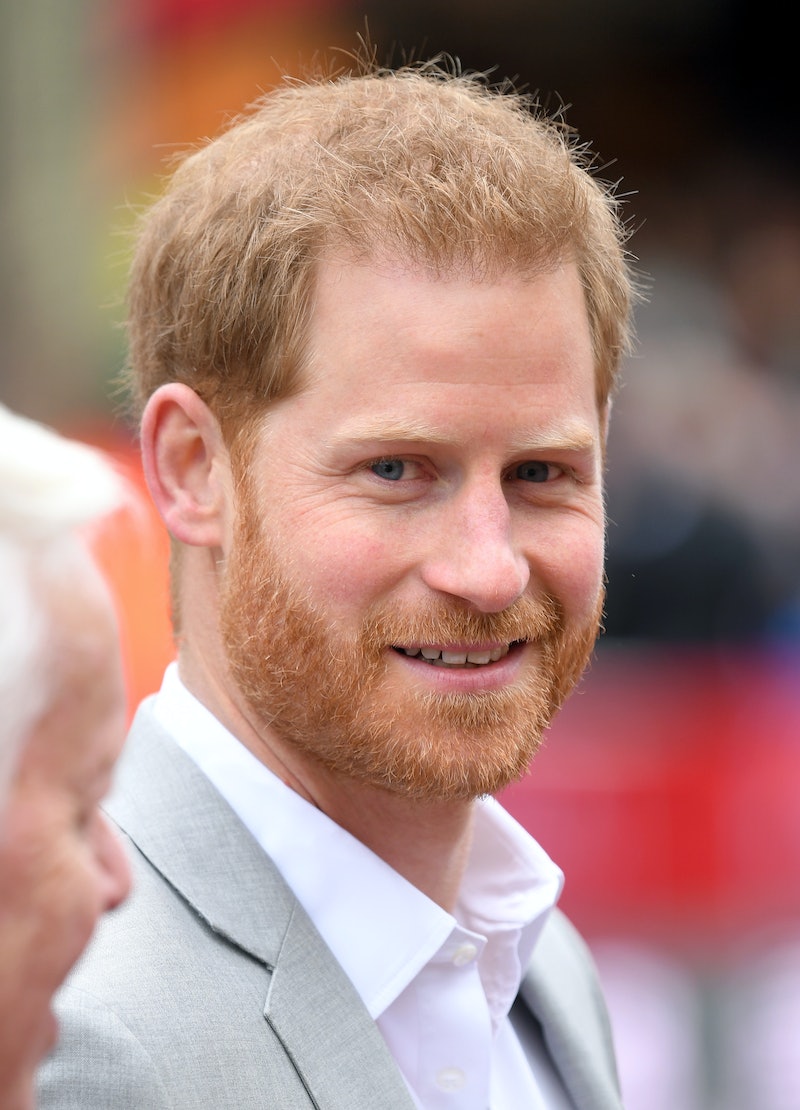 Since leaving England and taking residence in the U.S. last year, Prince Harry and Meghan Markle have been living life on their own terms by taking control of their work projects, charitable efforts, and apparently their hairdos. In a Jan. 11 interview on The Late Late Show with James Corden, Rob Lowe claimed that he saw Prince Harry sporting a very un-regal hairstyle. If true, Queen Elizabeth might want to sit down for a minute.

Speaking to Corden, the actor explained that he lives a mile away from the Duke and Duchess of Sussex. According to Variety, the couple purchased a $14.7 million home in Montecito, California, after stepping down from their posts as senior members of the royal family in January 2020. Lowe said that Harry and Meghan live very privately, especially amid the ongoing coronavirus pandemic. "He's been very reclusive," Lowe said. "Seeing him in the neighborhood is like seeing the Loch Ness Monster, and I finally saw him. I finally saw him driving his car. It was very, very quick."

However, when he finally had a chance encounter with the royal, Lowe noticed something unusual. "Don’t totally quote me on it, but it looked like he's wearing a ponytail," he revealed. "I'm just saying. It looked to me, as a casual observer, that his hair had grown very long and was pulled back very tightly by what I can only assume was a ponytail."

Corden simply couldn't believe what he was hearing. "I'm certain that isn't true," he responded. "Do you know what I think happened? I think you didn't see Prince Harry." But Lowe said he verified Harry's identity in a sneaky, investigative way. "Oh no, it was him because I have to say, I followed him to the house to see if the car went in," he explained.

If what he's saying is accurate, then Harry is surely enjoying the perks of not having to follow royal customs anymore. As reported by US Weekly, he and Markle have been much happier while living in the U.S. "Harry doesn't have any regrets about leaving the royal family whatsoever and is really happy in Montecito," a source told the outlet. "He and Meghan are enjoying their new life in California — being a normal family and having the freedom to make their own decisions without anyone watching over them."

More like this
The Best Hairstyles From The 2023 Grammys
By Olivia Rose Rushing
Pamela Anderson's Most Iconic Makeup & Hairstyle Moments
By Olivia Rose Rushing
Blake Lively Debuts Red Hair For The 'It Ends With Us' Film Adaptation
By Olivia Rose Rushing
The Best Beauty Looks Spotted At Paris Couture Week 2023
By Audrey Noble
Get Even More From Bustle — Sign Up For The Newsletter
From hair trends to relationship advice, our daily newsletter has everything you need to sound like a person who’s on TikTok, even if you aren’t.