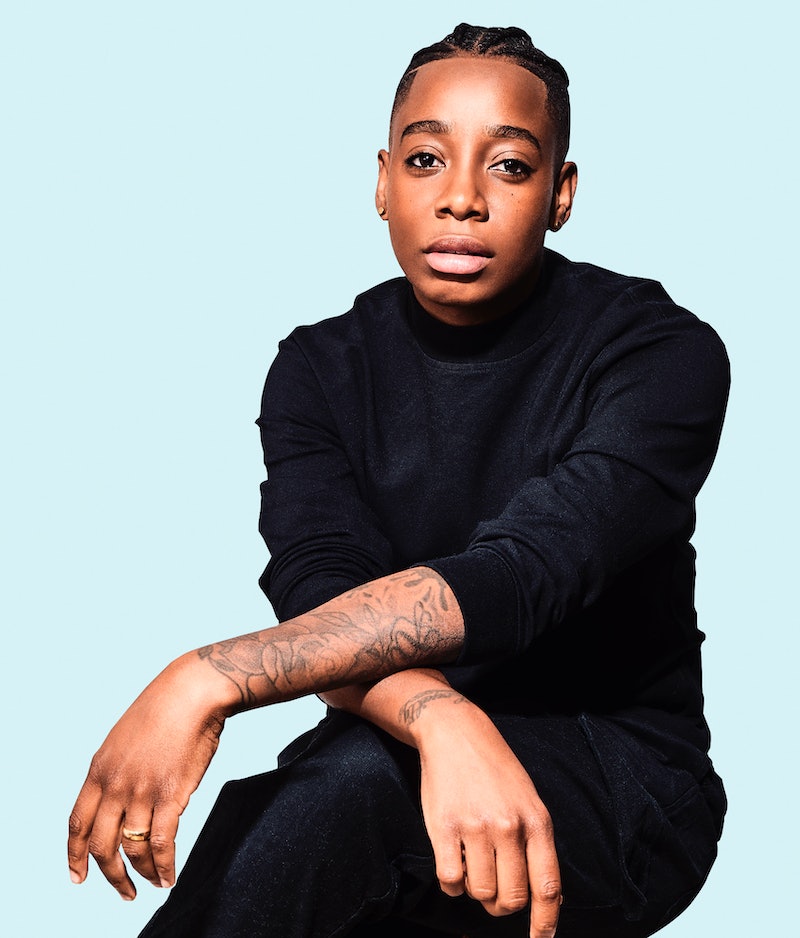 Before speaking to Dotty, I was pretty confident about my knowledge of Black music. But when the 32-year-old radio presenter and broadcaster starts speaking about Ghanian drill and Kenyan R&B, I quickly realise how wrong I was. "There are so many pockets of music from around the world that you may have never tapped into," she says. Luckily, I can learn all about them on her new Apple Music radio programme, The Dotty Show, which will celebrate Black music from the UK and beyond.

Dotty (who was born Ashley Charles) is fresh from leaving her long-standing gig BBC 1Xtra's breakfast slot earlier this year. It was a pivotal role that showcased the broadcaster's refreshing approach to interviews – or, as she puts it, "random conversations" – with everyone from Stormzy to Will and Jada Pinkett Smith.

"I could have never forseen speaking to Jada Pinkett about which Will Smith movie she thinks is the worst," she laughs. "But that's the conversation we ended up having – her telling me how awful Will Smith was in The Legends of Bagger Vance."

"There are so many pockets of music from around the world that you may have never tapped into."

Now the broadcaster is showcasing the best if global Black music on The Dotty Show Mondays-Thursdays and heading up The Agenda Radio on Fridays.

With the new shows comes a new job title, too. Dotty has just been appointed as Apple Music's Lead Cultural Curator in Black Music in the UK, a role she was pretty much born to do. After all, "she lives and breathes" Black music and has even spent time in the spotlight as an MC.

"For me, cultural curation is a really exciting opportunity to be that bridge between the Black music culture and the on-air offering," she's explains. "It's about making sure we're handling the culture with care [and] we're a celebratory and authentic platform when dealing with Black music."

Despite showcasing tracks from around the world, the presenter says Black British music will always "be at the heart" of The Dotty Show. It's a genre she seen flourish during her time in radio.

"For me, cultural curation is a really exciting opportunity to be that bridge between the Black music culture and the on-air offering."

"Black music is in a phenomenal place right now. It is pop music." She continues: "It's not niche, it's not specialist, it's something really mainstream. It's exciting to be playing music that 10 years ago would have been really under the radar." Just a few days before we speak, UK drill artist Headie One reaches number one with Edna, an album that may previously not have gotten the recognition it deserves.

It's clear that radio is something Dotty's hugely passionate about but, after all these years in the game, I wonder what it is specifically that keeps her coming back – and waking up for the early morning shifts.

"To be able to speak to people daily from different walks [of life] and to communicate [through] music is just so powerful," says the broadcaster. "This year has been an unimaginable year – I think we've really seen the power of radio. When we were properly in lockdown, I was broadcasting from home to give people some form of normality."

"This year has been an unimaginable year – I think we've really seen the power of radio."

When the playlists are well-curated, radio can help expand listeners music tastes too. "People contact me from complete different worlds. I've had farmers contacting me saying 'I didn't know dancehall music was thing and now you've changed my life.' And then you get people who are like 'I listen to you in jail because all I have is a radio.' These extremes of human interaction are what I live for."