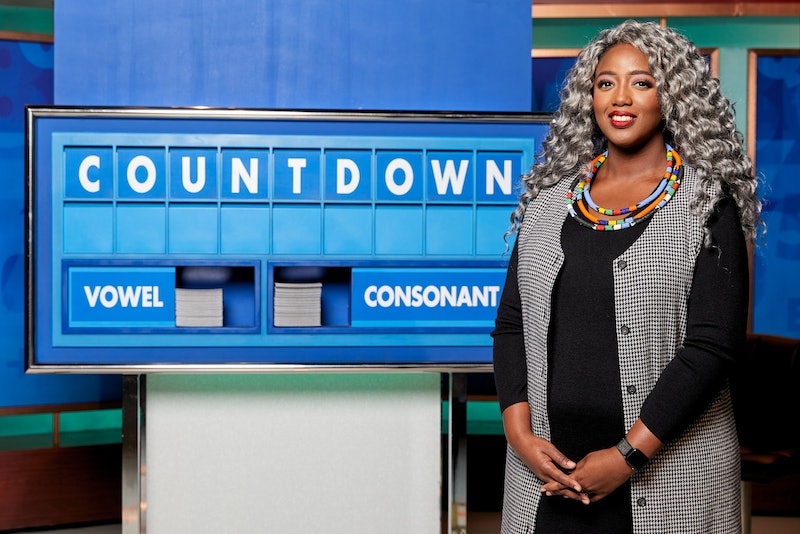 Back in November, Countdown announced mathematics genius Dr. Anne-Marie Imafidon MBE will be stepping in as co-host and “Keeper of the Numbers” while Rachel Riley takes maternity leave. The super-intelligent mathematician, considered one of the most influential women in UK tech, is co-presenting 60 episodes of the beloved Channel 4 panel competition, becoming the first-ever Black woman to be in charge of the famous Countdown board.

At just 31, the STEMettes CEO has an impressive resume and has made awe-inspiring academic achievements since she was a child. If you want to learn more about the new Countdown regular, keep reading to find out everything you need to know about Dr. Anne-Marie Imafidon (and prepare to be utterly impressed).

It’s no exaggeration to say that Imafidon was a child prodigy, having been one of the youngest people in Britain to pass two GCSES at Primary School. By age 11, the British-Nigerian super-brain had passed a computing A-Level. Naturally, the maths whizz went on to study at prestigious Oxford University and, by age 20, was one of the youngest to ever receive a master’s degree in mathematics and computer science from the institution. Oh, and did I mention she speaks six languages? Six!

The talent has held roles at Goldman Sachs, Hewlett-Packard, and Deutsche Bank, collecting multiple honorary doctorates in the process. Most recently, the celebrated academic was acknowledged at the University of Coventry for her services in STEM, all while her grandmother looked on (the moment was captured on Instagram, and it’s very sweet).

Throughout her career, Imafidon (who is also a public speaker) has worked to encourage more young women, nonbinary people, and minorities to pursue careers in STEM subjects and, in 2017, she co-founded STEMettes, an award-winning social initiative supporting that very mission.

Speaking to Evening Standard in 2019, she said she “never noticed” she was one of the few girls and women pursuing STEM subjects growing up. “Me and tech, we just get each other,” she said. “I never noticed that in maybe 70% of my maths A-level exams I was the only girl. Even when I started working, even though I was one of very few women on the floor, there was a level of respect. I got promoted. Which is why I run STEMettes. It’s like, ‘come and join the party.’” As a result of her work with STEMettes and elsewhere, she was awarded an MBE in 2017.

While her life seems full enough, Imafidon now has to tackle the feat of solving complicated math puzzles on live TV week-on-week, following in the footsteps of Rachel Riley and Carol Vorderman. But I think we can all agree Imafidon is more than qualified to handle it.

Ahead of the new season (which started on Dec. 13), Countdown encouraged guests to tune in for Imafidon’s “funky trainers, amazing hair-dos, show-stopping necklaces & some good old fashioned arithmetic.” You can catch her on Countdown every week day on Channel 4 at 2.10 p.m.

More like this
This Pre-'Love Island' Video Of Olivia & Zara Together Changes Everything
By Bustle UK
A New Netflix Doc Will Explore The Unsolved Murder Of Jill Dando
By Sam Ramsden
Twitter Can’t Make Up Its Mind About Ekin-Su’s 'Dancing On Ice' Skate-Off
By Sophie McEvoy
'Love Island’s Kai Fagan Is Very Clear About What He Doesn’t Like
By Sam Ramsden and Darshita Goyal
Get The Very Best Of Bustle/UK
Sign up for Bustle UK's twice-weekly newsletter, featuring the latest must-watch TV, moving personal stories, and expert advice on the hottest viral buys.