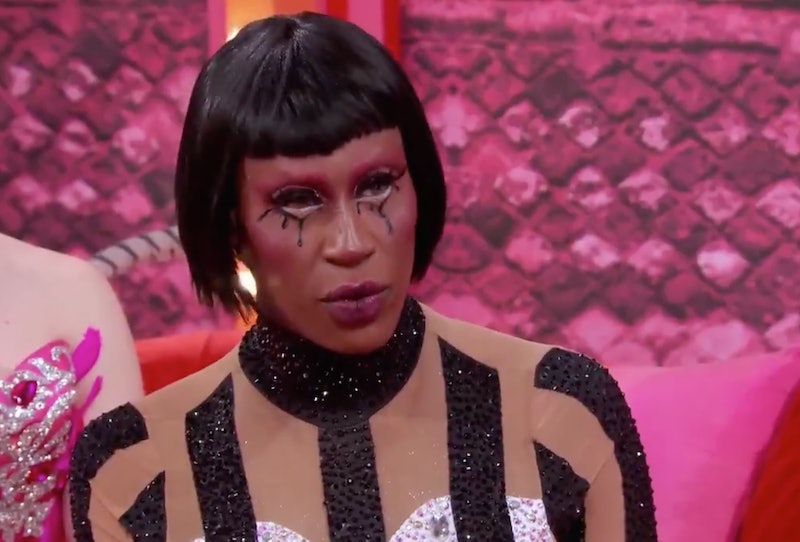 Say it loud and say it proud: justice for Shea Couleé. This week's All Stars 5 challenge was hers to lose, and unfortunately, the judges got it wrong.

During Friday night's episode, the queens attended a barbecue-style Charles family reunion dressed as Ru's country cousins. Then it was onto a backyard-themed runway, where tablecloths and kiddie pools were turned into couture lewks. As weird as it was, Shea was up for the task, and she even helped the other queens complete their gowns in the werkroom. Still, somehow Miz Cracker got the win instead.

That's not to say that Cracker didn't perform, because she did. Her persona, Jocelyn Opal Groves, was a hillbilly-inspired play on AHS: Coven's Misty Day, crocheted dress and all. But Shea opted for something much more original and thoughtful, dressing as RuPaul's "baby niece" Sheaquita with an airbrushed T-shirt dress that paid homage to her late Grandrea — aka the high school veteran Shea portrayed in Season 9. We love a full circle moment!

On top of that, Shea was the only queen who tied both of her looks together. Cracker's badminton gown was stunning (those shoes!), but it lacked cohesion. Shea, on the other hand, trimmed her Grandrea dress in blue gingham — the same material she used for her assless chaps at the backyard barbecue. And to Carson Kressley, who critiqued the look as too busy: chaps and a wedding veil is a combo we didn't know we needed!

Shea has also been a standout queen all season. When India Ferrah revealed that Alexis Mateo had campaigned to send Shea home, she didn't start a full-on brawl as, let's be honest, many queens would. She simply called her out and moved on. She's still competing with Alexis, and while she's watching her back, she's not continuing to feed the fire. Instead, she's offering to help her fellow sisters complete their designs, fix sewing machines, and align dress seams. "It's really important that as queer people we all act as family," she told the judges during critiques. "I understand that this is a competition. But if one of us looks good, all of us look good."

Just give her the crown now!

More like this
'RHOSLC’s Heather & Whitney Are Still On A “Friendship Break” After Season 3 Reunion
By Jake Viswanath
Everything To Know About A Potential 'RHODubai' Season 2
By Kadin Burnett and Brad Witter
Airris From 'MAFS' Says He Doesn’t Regret Going To Decision Day With Jasmine
By Brad Witter
'Bachelor' Fans Think Rachel & Clayton Are Dating After This TikTok
By Grace Wehniainen
Get Even More From Bustle — Sign Up For The Newsletter
From hair trends to relationship advice, our daily newsletter has everything you need to sound like a person who’s on TikTok, even if you aren’t.