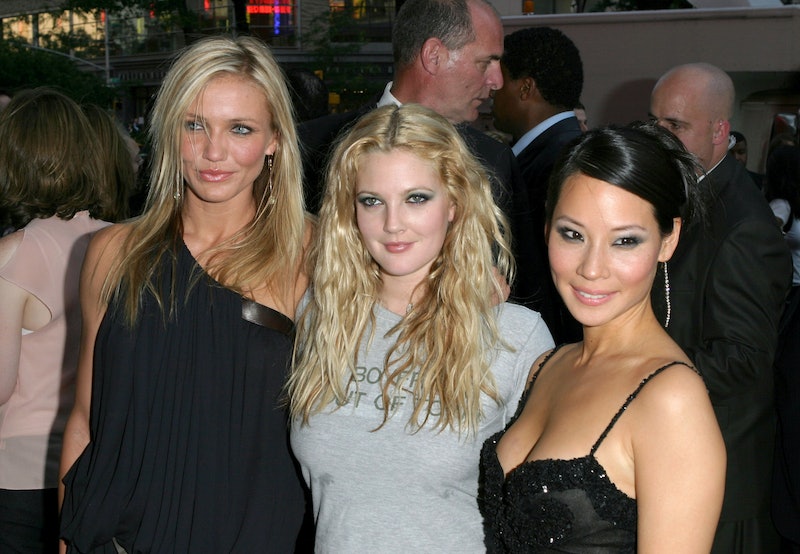 Lucy Liu, with my girl Drew and Cameron D (sorry, no Destiny) — back together again. Drew Barrymore hosted a Charlie's Angels reunion on the premiere of her new talk show, The Drew Barrymore Show, Monday, Sept. 14. Barrymore welcomed Liu and Cameron Diaz to her new show for an emotional first interview that ended with the host in tears. "If you're gonna do something big, you wanna do it with your girlfriends," she said.

The newly minted talk show host made sure the audience knew that this reunion wasn't just for nostalgia's sake: they're ride or die IRL too. "The thing that I love about our friendship is that we have been there in all the big and important moments. We've also been there in the small moments, and the casual moments," Barrymore said. "And the reason we are such good friends is because it's real, and we go through real stuff with each other. It's not a Hollywood fairytale."

Though Diaz insisted that the three had been through "literally ev-er-y-thing" together, there is one huge exception. The three stars weren't actually together for the interview. It turns out, Diaz was digitally added into the studio with Liu and Barrymore, as she lives in L.A. and the show is filmed in New York. They didn't let a little distance get in the way of their reunion, though, reflecting on 20 years of friendship — Charlie's Angels was released in 2000 — and all the milestones they've hit along the way.

"20 years is a long time y'all," Diaz said, noting that, as she approaches her fiftieth birthday, "that's nearly half my life." The new mom continued, "We have Charlie's Angels as sort of our backdrop that brought us together, but then we get to fill in all of life together." Liu agreed, though she did admit, "I know that 20 years have gone by, but I feel like it was yesterday."

Liu, Barrymore, and Diaz also talked about motherhood. Liu is mom to a 5-year-old son, Rockwell Lloyd Liu, while Drew has two daughters, Olive, 7, and Frankie, 6, and Diaz just welcomed her first child, Raddix. "If I think about it, I think my heart was smaller back then [in my twenties]," Liu said. "Because it was sort of more inclined to what I wanted to do, but now it's sort of like, 'What do we want to do?'" The discussion quickly turned into the actors discussing their own mortality — a very 2020 topic, as the host pointed out — before ending with a lot of laughs, and a few more tears. "I'm going to be thinking tonight in my bed, wondering how I got so lucky to live a life with you guys," Barrymore said at the end of the segment.

Though this marks the first time the three Angels have been onscreen together, they have frequently supported each other publicly and reflected fondly on their time as Angels. Just last year, Barrymore and Diaz showed their love for Liu, supporting the Elementary actor when she was awarded a star on the Hollywood Walk of Fame. (Fellow Charlie's Angels: Full Throttle co-star Demi Moore gave a speech in her honor.) And Diaz even teased a potential reunion during an Instagram Live in April, saying, "Oh my god, it [a Charlie's angels reunion] would be so much fun," per Us Weekly.

More like this
Lindsay Lohan Just Recalled A Hilarious 'Parent Trap' Story
By Sam Ramsden
The 'Love Actually' Reunion Is Missing A Major Player
By Bustle UK
The 'Kenan & Kel' Reunion On 'SNL' Took A Dramatic Turn, Thanks To Keke Palmer
By Brad Witter
The 'Ugly Betty' Cast Just Reunited In The Best Way
By Sam Ramsden
Get Even More From Bustle — Sign Up For The Newsletter