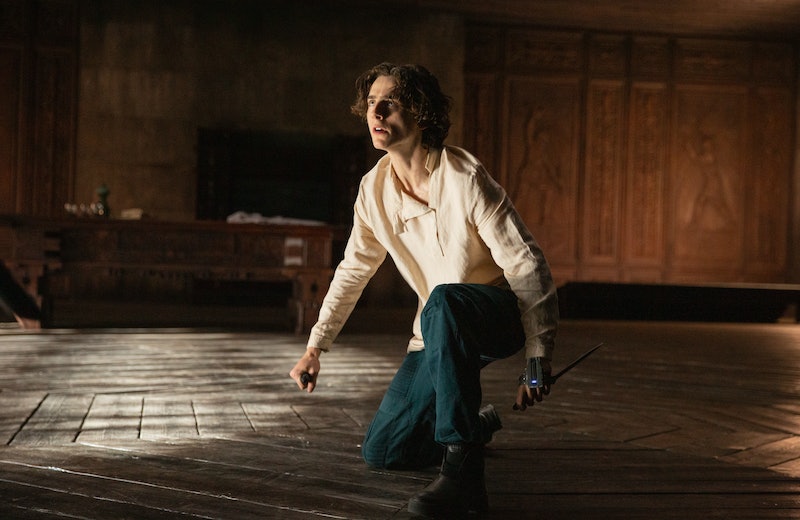 Intergalactic planets and giant sand creatures are just some of the components of the trailer for director Denis Villeneuve’s adaptation of Dune, the sci-fi film based on Frank Herbert’s novel of the same name. The film’s Twitter account released the highly-anticipated full-length preview (along with an exclusive cast Q&A led by Stephen Colbert) on Wednesday, Sept. 9 — and Timothée Chalamet and Zendaya are at the forefront of the biggest battle yet.

Chalamet leads the cast as Paul Atreides, the son of Duke Leto Atreides (Oscar Isaac), a nobleman appointed leader of the inhospitable desert planet Arrakis. Also known as Dune, Arrakis is the only source of a sought-after spice (called “melange” in the book) that extends human life and enhances one’s abilities. The film, scheduled for a Dec. 18 theatrical release, will follow the battle for the control of the planet and the spice.

In the trailer, Paul prepares for battle as his family is put in danger. “This is an extermination,” he says. “They’re picking my family off one by one. Zendaya is also introduced as Chani, a mysterious woman named from a group called Fremen who is, for reasons unknown, drawn to Paul. The star-studded cast also includes Jason Momoa, Javier Bardem, Josh Brolin, Rebecca Ferguson, Dave Bautista, and Stellan Skarsgård.

In the same vein as Villeneuve’s Blade Runner 2049 and Arrival, Dune offers pointed observations about the world (inhospitable desert planet or not) in which we live. With the narrative surrounding the control of a sought-after spice, the film has political and environment themes about the exploitation of peoples. Isaac touched on the relevance of these themes in an interview with Empire magazine on Sept. 1. “It’s about the destiny of a people, and the different way that cultures have dominated other ones,” Isaac said. “How do a people respond when it’s at the tipping point, when enough is enough, when they’re exploited? All those things are things we’re seeing around the world right now.”

Villeneuve’s version of Herbert’s novel is the second movie adaptation of the sci-fi classic. David Lynch released a version in 1984 that starred Kyle MacLachlan. (The movie didn’t do well at the time.) Villeneuve cited the “half-satisfied” feeling of Lynch’s offering behind his adaptation. “I’m a big David Lynch fan, he’s the master,” Villeneuve told Empire. “When I saw [Lynch]’s ‘Dune' I remember being excited, but… there are parts that I love and other elements that I am less comfortable with. So it’s like, I remember being half-satisfied. That’s why I was thinking to myself, ‘There’s still a movie that needs to be made about that book, just a different sensibility.”

More like this
Everything You Need To Know About The 'Knives Out' Sequel
By Grace Wehniainen
Everything To Know About 'The Hunger Games' Prequel Movie
By Grace Wehniainen and Radhika Menon
The 'Hocus Pocus' Sequel Finally Has A Release Date & It Makes Total Sense
By Shannon Barbour and Radhika Menon
Chris Hemsworth Joked That Baring His Butt In ‘Thor: Love And Thunder’ Was A “Dream”
By Brad Witter
Get Even More From Bustle — Sign Up For The Newsletter