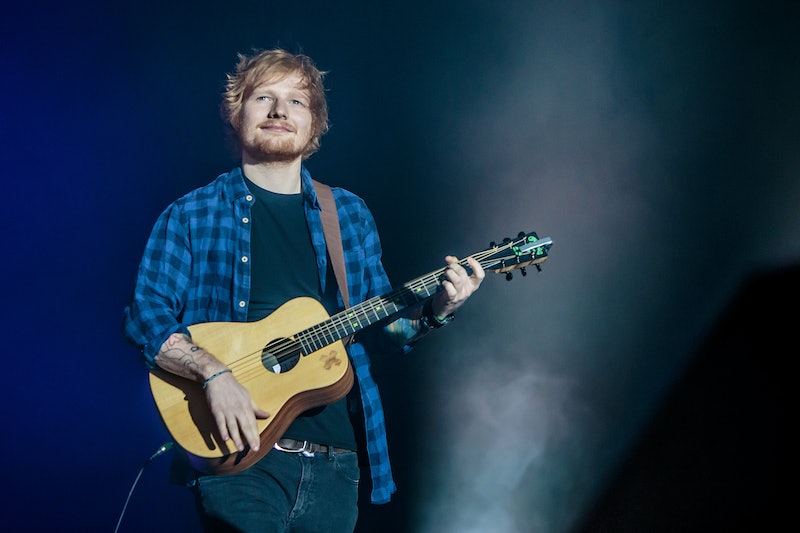 More and more, celebrities are getting real about mental health issues, and in a new interview published on Tuesday, July 28, Ed Sheeran opened up about his "addictive personality." The singer, who is known for his man-with-a-guitar persona and love songs, revealed that he struggled with eating and drinking problems in 2015. It turns out, performing on his x World Tour in 2015 was "the lowest" he had ever felt.

While speaking during the Hay House Chasing the Present Summit, the singer explained that, while on tour, he spent most days sleeping, resulting in a string of bad habits. "For me, it was down to bad diet, drinking and then not seeing sunlight at all... oh, and I wasn't exercising," he recalled. "I would stay up and drink all night. The buses would park underneath arenas and I'd sleep on the bus all day and then wake up and then come out, do the show, drink, get back on the bus, and I didn't see sunlight for like maybe like four months."

Looking back, he attributes these patterns to an "addictive personality" and admitted that he's had trouble with moderation in the past. "I kind of don't do things by halves, so if I'm gonna drink, I kind of see no point in having a glass of wine, I'd rather have two bottles of wine," he said. "But, two bottles of wine probably might make you quite sad the next day." He also said that people used to call him "Two Dinner Teddy" due to him often ordering two meals at once. "You start putting on loads of weight and then you start hating the way you look and then you start getting sad about that."

Sheeran said that his touring routine, albeit fun at first, started to affect his mental health greatly. "It's all fun and games at the start and it's all rock and roll and it's fun and then it starts getting like just sad," he said. "I guess I kind of felt, 'Was it all...What was the point?'... Actually, I guess in a dark way, you're kind of like, 'Why am I around? Like what is the point?'"

Now, Sheeran said he's changed his lifestyle and it has made him much happier, thanks in part to his wife Cherry Seaborn. "She exercises a lot, so I went and started going on runs with her," he said. "She eats quite healthily, so I started eating quite healthily with her. She doesn't drink that much, so I wasn't drinking... I think that all changed things."

More like this
Ed Sheeran Pays Tribute To "Brother" Jamal Edwards With SBTV F64 Song
By Sam Ramsden
Twitter Is Saying The Same Thing About Beyoncé's Renaissance World Tour
By Shahed Ezaydi
“I’m Not Here To Make Friends” Speaks To A New Sam Smith Era
By Maxine Harrison
How To Buy Tickets For Beyoncé’s UK Renaissance Tour Dates
By Shahed Ezaydi
Get Even More From Bustle — Sign Up For The Newsletter
From hair trends to relationship advice, our daily newsletter has everything you need to sound like a person who’s on TikTok, even if you aren’t.