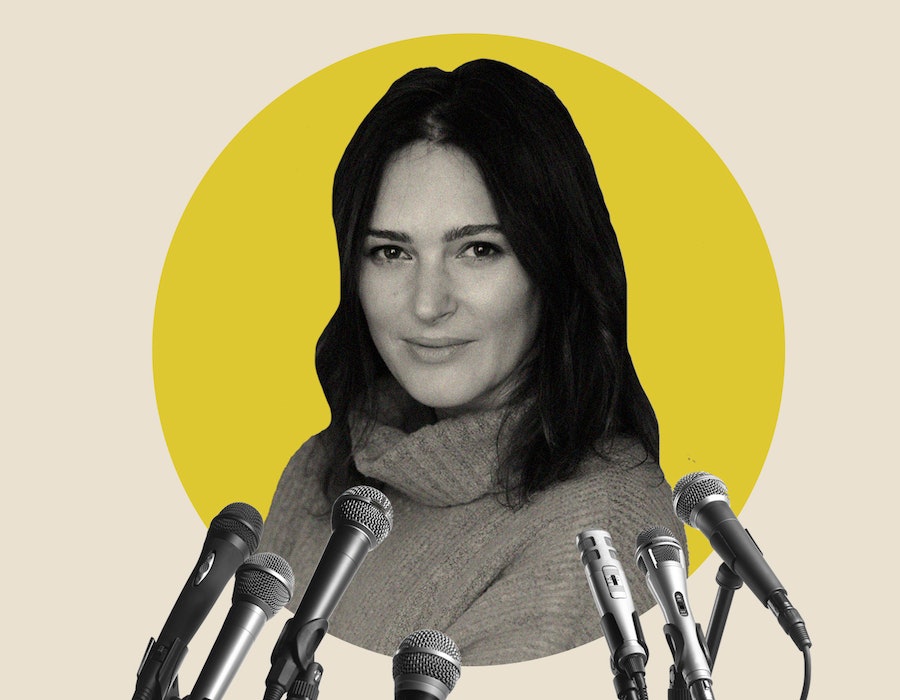 In Bustle’s Quick Question, we ask women leaders all about advice — from the best guidance they’ve ever gotten to what they're still figuring out. Here, author and podcaster Elizabeth Day shares her thoughts on failure and the proactive ways in which women can support other women.

You may know Elizabeth Day best from her fiercely successful book How To Fail, which explore just that: the power of failure and how we can use it to our advantage rather than letting it define us.

Following the success of her book, Day channelled her energies into a podcast of the same name, which has seen everybody from Phoebe Waller-Bridge to Jamie Dornan take to the mic to talk about low periods in their life.

But most recently, the writer has partnered with No7 to launch their SHEcovery campaign, which aims to support women in the workplace and their recovery from the SHEcession (a phrase coined by President of the Institute for Women’s Policy Research, C Nicole Mason) following the COVID pandemic.

The campaign — which is in partnership with AllBright — is something Day feels very passionately about. “I am so into what this campaign stands for,” she explains. “The idea that despite women bearing the brunt of work and emotional labour during this pandemic, they have actually felt empowered by it rather than oppressed, and have almost discovered the power of their own resilience, I think is amazing. That’s so what I am about; the idea that you can turn a challenge or failure into an opportunity for growth.”

I spoke to Elizabeth about her own failures and successes, female friendship, and the power of realising you have survived 100% of your hardest days.

Which women inspire you most work-wise?

This sounds like a cop out answer but it isn’t. My best friend Emma is a psychotherapist. She’s not only the wisest person I know but also the funniest, and she’s worked so hard during the last 12 months as she’s a key worker. So the fact she is able to do that and still be there as a friend for me and a mother to her children and wife to her husband is so inspiring. She somehow manages to live this totally integrity filled lifestyle while still being a total badass at her job.

What can women do to support each other in the workplace?

Historically because of the society we live in — which is still a sexist society — we have been taught to believe that we have to compete for everything, for space, for jobs, for relationships, and actually I think that holds us back. It’s great to have drive and ambition, but you should never fall into the trap of thinking your success diminishes someone else’s, or vice versa. So we need to have a mindset shift, and to come from a place of raising each other up. Whether that means liking someone’s Instagram post when they’re launching a business or buying from a local female-owned café. [It’s important to be] making conscious choices that you realise will help raise us all up, rather than thinking it’s a constant competition or battle.

What did you want to be when you were growing up?

At age four, I wanted to write books. That is very weird because there were no authors in my family and I could barely write at that stage, but I just remember loving books and loving stories. It was a dream that I had that I’ve never once deviated from. I feel very lucky in that respect, because it meant that choices were much easier for me to make along the way.

Your book How To Fail’ talks about failure in all areas of life; how would you summarise what you have learnt most about failure and how we can use it to our advantage?

For every failure I have experienced, I am still here to tell the tale. And that is such an important thing for everyone to remember: you have got through 100% of your toughest days, and once you realise that you’re like, “Wow I am actually pretty strong.” It’s one of the greatest lessons and liberations that I’ve learnt; that as long as you’re still trying and you pick yourself up and start again, then you’re winning. Then there is no such thing as failure. The only real failure is not to try.

Also, failure has been an incredible portal for me to connect to other people, and I think that’s because, when we’re open about our failures, we’re being vulnerable, and when we’re being vulnerable, we’re being real. And everyone on this big old planet has failed, it’s one of the things we all have in common, and when we connect on that level, it’s almost a short cut to getting to know someone as they really are. Vulnerability is a beautiful thing, and it’s the source of all real true connection.

What are you proudest of so far?

My work-related answer is that I am genuinely proudest of my degree, because I didn’t think I was going to do as well as I did, so it was a real lesson in not setting my own limitations.

Then personally, I am just proudest of keeping on trying, and I mean that in multiple respects. Such as keeping on trying to find the right relationship. I’ve been married and divorced and had a series of heartbreaks, but I’ve never lost hope in love. And I believe that has led me to the relationship I’m in now, which is amazing, and we have just gotten married!

What does your average day look like? And how has that changed with the pandemic?

I’m sure everyone says this, but there’s no such thing as a typical day! Here’s an example of a day: I’ll wake up in the morning, do my exercises in the morning (I have a peloton and I am obsessed), then I may record a podcast for How To Fail. Then I might be writing my column for You magazine, then I might do some editorial changes on my new book.

How that’s changed mainly, of course, is everything has gone online, and I’ve actually got busier. Because I think like with many people, work was my coping mechanism, so work expanded to fill every available space as a distraction technique! And there was a real hunger from companies for me to come in and talk about failure, because they were all facing it on an unprecedented scale. So I did a lot of corporate talks.

How do you overcome tough days or days when you’re feeling down, and still focus positively on work?

That thing about knowing I have survived 100% of my toughest days in the past is really helpful, because I know now that a tough day is transient. I also have a very shrill internal critic, and on my toughest days the self criticism is off the scale, so I really have to remind myself that I am not my worst thoughts, that actually they are happening because I am tired or stressed or overwhelmed, but that doesn’t actually make any difference to who I am or the quality of work I am producing, it’s what I am telling myself about it instead. And that’s how I get through it, remembering not everything is permanent.

What is one of the biggest challenges you have faced so far in your career, and how did you overcome it?

I was a staff features writer at The Observer for eight years, and I started there when I was quite young, so I felt very intimated and like an imposter. And as a result of that, I never fully inhabited my power in that role, I never once asked for a pay rise, which embarrasses me as someone who defines themselves as a feminist. And I always just said yes to everything. What happened as a result of that is I made myself indispensable, in a role that ultimately I outgrew, but no one wanted to move me on. I had fallen into the trap of thinking I would be rewarded for this one day, and then I realised that no one was going to do that for me, and that I had to do it for myself. And after 8 years of that kind of dynamic I did ask for something, I was rejected, and I just left.

I left without anything to go to, which is quite a crazy decision as I am usually very sensible about these things, but there was something in my gut that was pushing me to do it. I have really learnt to listen to my instincts! It was one of the best decisions I ever made, because I realised you can’t give yourself permission to grow until you have space in which to grow. And I needed to create the space for myself. To live life according to my rules, rather than rules that were now outdated for me. But it was a strange instinctive decision and I always think they are the best ones. Often I think when we feel fear, we’re actually feeling excitement.

You can find out more about the No7 x AllBright SHEcovery campaign here.