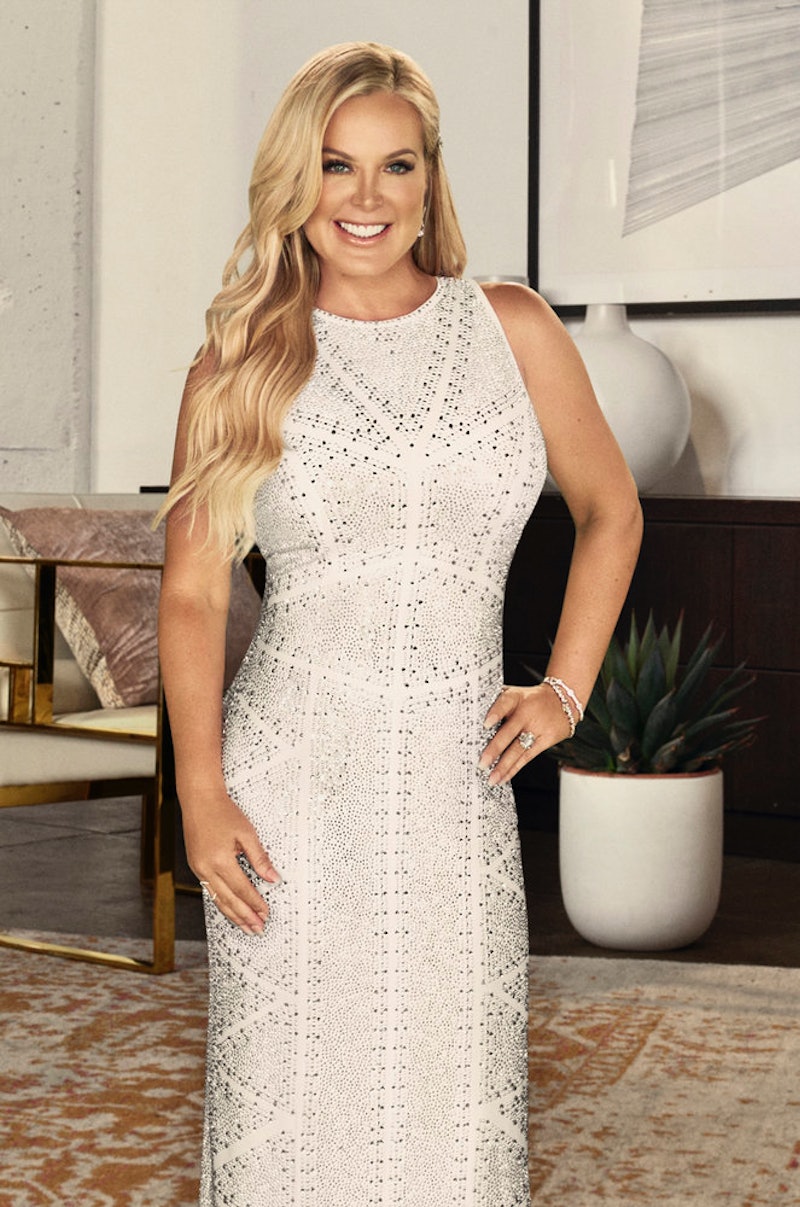 Now that OGs Vicki and Tamra have officially exited the series, new RHOC cast member Elizabeth Lyn Vargas has some big shoes to fill. If her Season 15 tagline — "I earned my money the old-fashioned way, marrying it, then making more" — is any indication, however, she'll fit in with the group just fine. Even Shannon Beador, who's arguably been the most difficult wife to win over, affectionately described Elizabeth as "fun" in the RHOC Season 15 trailer — though it seems they'll have some drama down the line.

Here's a primer on everything you need to know about the RHOC newcomer.

Who is Elizabeth Lyn Vargas from RHOC?

Although Shannon referred to Elizabeth as Braunwyn Windham-Burke's friend in the sneak peek, her Bravo bio states she's welcomed to the group through Kelly Dodd, whom "she has known for a few years from the Newport party circuit." Born and raised in Missouri, Elizabeth "always dreamed of living a life of luxury on the beaches of Orange County and with the help of her soon-to-be ex-husband, her dream has become a reality."

Who is Elizabeth's ex-husband?

Elizabeth's RHOC storyline centers on her then-ongoing divorce from Norwegian-American businessman and former musician Bernt Bodal, the former CEO and majority shareholder of American Seafoods. Bernt, who appeared on a 2012 episode of CBS' Undercover Boss, is also a bass guitarist who has played with Eddie Vedder of Pearl Jam.

According to Us Weekly, Elizabeth confirmed in July that the divorce paperwork was finalized via her Instagram Stories: "You know, I don’t know how I’m feeling today. I’m excited but I’m sad and I – it's the end of an era – I was with the guy for 20 years. 17 years but divorcing for three. 20 years total of my life and I’m happy but it's a failure. … I paid an arm and a leg to get divorced and to get what I thought I needed … and here we are transitioning to a new phase in my life and I’m excited."

Who is Elizabeth's boyfriend?

"Jimmy and I have a very intimate relationship; we just don't have sex," Elizabeth said in perhaps her most intriguing line from the RHOC trailer. Although not much is yet known about their relationship, Bravo teased that "her lifestyle as well as her complex and sexless relationship with boyfriend Jimmy creates a lot of speculation from the women, and they start to scrutinize who she is really is."

What is Elizabeth's job?

While filming RHOC, Elizabeth was busy working as the CEO of the online music company Edge Music, but Us reported that as of July her business was struggling. "Edge Music was a failure," she said via Instagram Stories at the time, per the magazine. "It's not quite a failure yet but it's on its way. I’m gonna pivot my life to a new direction to generate revenue – you know, from things that I acquired – I can repurpose and you know."

Since then, she announced that she's launching a premium liquor brand called Vargas Vodka, which will be available in December. "Rich in heritage, Vargas Vodka is inspired by the first Spanish explorers lured by the legend of Queen Califia, the emperor of the fabled island of California blessed with an abundance of gold protected by soldier griffins--guardians of the divine," she wrote in a Sept. 8 Instagram post.

In addition to documenting her OC lifestyle, Elizabeth's Instagram shares the spotlight with her Siberian husky, Coda. She's currently raising funds via her non-profit We Care Rescue Ranch to build her own no-kill shelter.

More like this
Everything To Know About 'RHONY' Season 14
By Jake Viswanath, Alyssa Lapid and Brad Witter
Rachel Fuda Gave Birth Just Weeks Before 'RHONJ' Season 13
By Brad Witter
RHOP’s Robyn Dixon Explained Why Juan Paid For Another Woman's Hotel Room
By Brad Witter
Brianna Revealed Why 'The Bachelor' Premiere Was Tougher For Her Than You Saw On TV
By Brad Witter
Get Even More From Bustle — Sign Up For The Newsletter
From hair trends to relationship advice, our daily newsletter has everything you need to sound like a person who’s on TikTok, even if you aren’t.