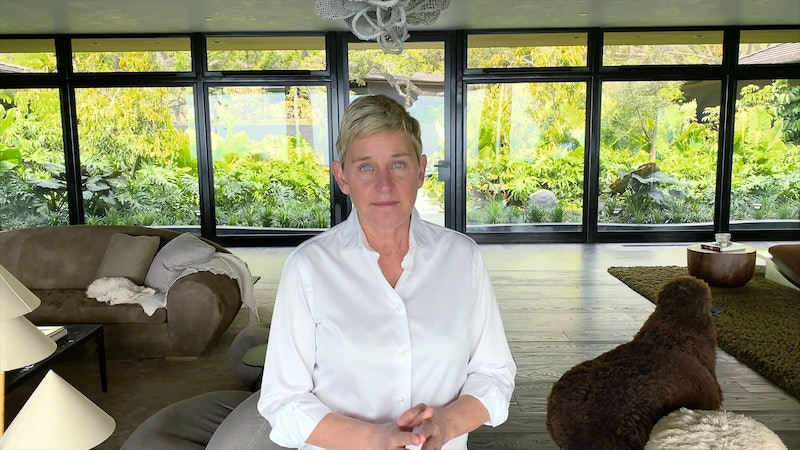 There are some major changes happening on The Ellen DeGeneres Show, and the host is showing remorse for the problems that caused these major shifts. Ellen DeGeneres apologized to her staff once again on Monday, Aug. 17, as three senior producers parted ways with the show amid allegations that her top producers fostered a toxic environment on set for staffers. Bustle reached out to DeGeneres for comment.

A spokesperson for Warner Bros. confirmed to Bustle that executive producers Ed Glavin and Kevin Leman, as well as co-executive producer Jonathan Norman, have "parted ways" with the show, but no official reason was given for their departure. The move comes after Glavin, Leman, and Norman were accused of sexual misconduct, harassment, and questionable behavior by former staffers in a BuzzFeed report. (Leman and Norman both denied allegations of harassment.) However, despite reports of "day-to-day toxicity" on the Ellen set, including accusations of intimidation and racial insensitivity, other higher-ups are remaining. Executive producers Mary Connelly and Andy Lassner are reportedly staying on the show in their current positions, as is DeGeneres herself.

The host reportedly confirmed the changes in a video Zoom call with all staffers on her show, where she apologized for letting her set turn into a toxic workplace for many, even, according to Variety, reaching the point of tears. She also reportedly denied rumors that staff was instructed not to address her or look her in the eye, calling them "crazy" and "untrue," but said that she has an introverted personality, which may have led her workers to believe that she was being rude, and apologized to anyone who felt "disregarded."

"I’m a multi-layered person, and I try to be the best person I can be and try to learn from my mistakes," she reportedly told her staff on Monday. This echoed her statements from July, when, in a letter to her staff, DeGeneres reportedly acknowledged the toxic workplace allegations, and admitted that not everyone on staff felt that they were "treated with respect," and pledged to do better.

Addressing her staff directly on Monday, DeGeneres acknowledged that her way of operating the show had to change. "I care about each and every one of you," she said, according to The Hollywood Reporter. "I feel like I’ve kind of let the ball drop a bit because I’m focused on the show, I go in and I do the show, and I’ve just let everybody to do their jobs — to run different departments. And it just became a well-oiled machine, and I think that is the problem. It’s not a machine. This is people. These are human beings that are working hard every single day to put this together. This show would not be what it is without all of you.”

According to Variety, producers informed staff that WarnerMedia's internal investigation found no evidence of "systemic" racism on the show, but DeGeneres and producers acknowledged that more work needed to be done with diversity on the staff. The show's DJ Stephen "tWitch" Boss has been promoted to co-executive producer, and the host has promised that all staffers — including herself — will participate in diversity and inclusion workshops.

In addition, WarnerMedia has set up a dedicated HR representative for the show and a hotline where staffers can leave complaints. DeGeneres also reportedly "vowed" to meet with staffers in small groups to address concerns once it's deemed safe to. Hopefully, these decisions will result in actual change in the workplace culture on the Ellen show.