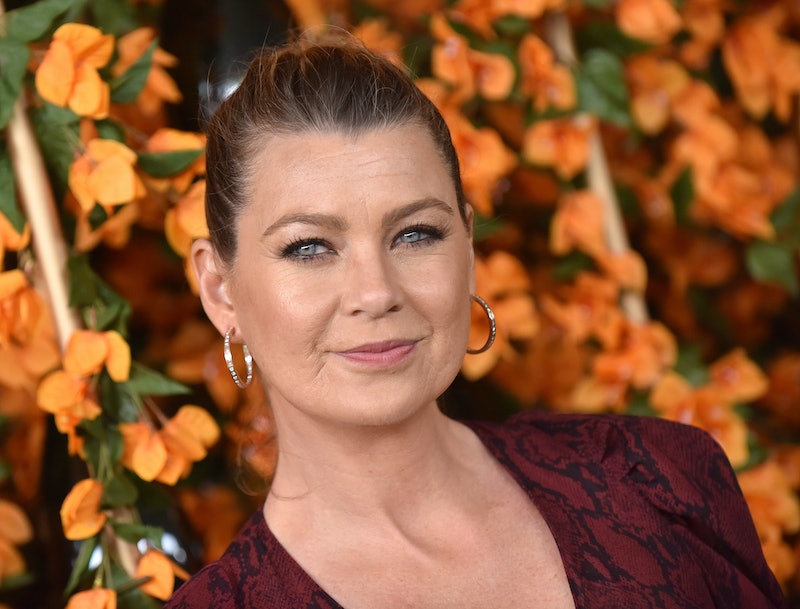 Some may think that playing the same character for over 16 seasons would be daunting, but in the case of Grey's Anatomy star Ellen Pompeo, it's proven to be a rewarding journey — quite literally. While appearing on this week's episode of Spotify's Jemele Hill Is Unbothered podcast, Pompeo revealed the reason she's stayed on Grey's Anatomy for as long as she has — and it all boils down to one very important factor: money. Her role as Dr. Meredith Grey has provided the actor with a level of financial security for both her and her family that she's felt no desire to walk away from.

"You know, I made choices to stay on the show," she explained on the podcast. "For me, personally, a healthy home life was more important than career. I didn't grow up with a particularly happy childhood. So the idea that I have this great husband and these three beautiful children [and] a happy home life was really something I needed to complete, to close the hole in my heart."

So she opted to stay put in a position that she knew would produce fruitful rewards year-in and year-out, rather than take a gamble on a less-than sure project somewhere else. And it's a decision that has left her with zero regrets. "I made a decision to make money, and not chase creative acting roles," she continued, while noting that had her Grey's fame come at an earlier point in her career, she may have altered her priorities.

"I didn't start Grey's until I was 33, and then I started having kids at 40," she said. "If I started the show when I was younger, [like] 25, I probably would have dipped out when I was 31, 32, [when] my six-year contract was up, but my age had a lot to do with it." Pompeo isn't ignorant to the challenges of female actors over 40, which is why she's just preferred to see her long stint on Grey's Anatomy as "the blessing that it is."

This echoes similar statements the actor has made in the past. In a conversation with Empire star Taraji P. Henson for Variety back in 2019, she explained why she stuck around, despite having to deal with some toxicity behind the scenes. "The first 10 years we had serious culture issues, very bad behavior, really toxic work environment. But once I started having kids, it became no longer about me. I need to provide for my family," she said. "At 40 years old, where am I ever going to get this kind of money? I need to take care of my kids."

And take care of them she has. Pompeo reportedly makes $575,000 per episode, which adds up to more than $20 million a year. She also earns a producing fee for her work behind the camera on Station 19, ultimately making her the highest paid actress on a primetime drama, per The Hollywood Reporter. If that isn't enough motivation to keep scrubbing in year after year, then what is?