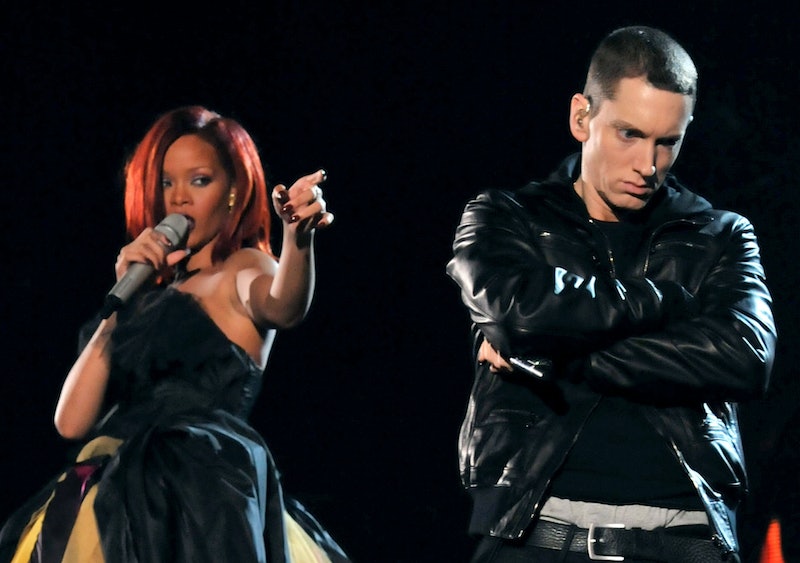 The real Slim Shady just stood up to say he's sorry. In his new song "Zeus," Eminem apologized to Rihanna for a decade-old lyric about Chris Brown that leaked in 2019. The track is part of the multi-Grammy winner's surprise album, Music to Be Murdered By — Part B , which dropped on Friday, Dec. 18.

"But, me, long as I re-promise to be honest / And wholeheartedly, apologies, Rihanna," he raps. "For that song that leaked, I'm sorry, Ri / It wasn't meant to cause you grief. Regardless, it was wrong of me."

The 2019 unreleased Eminem verse in question included the line: "I’m not playing, Rihanna, where’d you get the V.D. at? / Let me add my two cents / Of course I side with Chris Brown / I’d beat a b*tch down, too." The Detroit rapper was referencing a February 2009 altercation between Brown and then-girlfriend Rihanna, following which Brown pleaded guilty to felony assault. A judge sentenced Brown to five years probation and community service.

Multiple outlets reported at the time of the leak that the snippet was part of the "Things Get Worse" reference track, originally recorded in 2009 for Eminem's Relapse album, according to XXL. (B.o.B.’s 2011 track of the same name included a different edit.) Following the leak, Eminem's publicist, Dennis Dennehy, clarified the song was 10 years old, per Entertainment Weekly, explaining in a statement that after Eminem recorded the track, "he scrapped it and rewrote it," and that it had been excluded from his album's final version for a reason.

The leak caught Rihanna fans by surprise, given that she and Eminem had collaborated on multiple projects, including 2010's "Love the Way You Lie" and 2013's "The Monster." In an MTV News interview with Sway Calloway following the recording of "Love the Way You Lie," Rihanna called Eminem one of her favorite artists. The duo even teamed up for the 2014 Monster tour.

Aside from Rihanna, the many other celebrities Eminem name-checked on his latest album's 16 tracks include Billie Eilish, Drake, Machine Gun Kelly, and Colin Kaepernick. The rapper, who recently celebrated 12 years of sobriety, also tackles current events, such as the novel coronavirus pandemic and Black Lives Matter movement, and calls out convicted sex offenders Bill Cosby and Harvey Weinstein, as well as accused sex offender R. Kelly (Kelly has denied the allegations).

For her part, Rihanna has yet to publicly comment on Eminem's mea culpa, but fans are still waiting for her to drop a new album. Sounds like a perfect opportunity for her to kill two birds with one stone.

More like this
'Traumazine' Has Megan Thee Stallion Twitter Dancing Through Their Feelings
By Grace Wehniainen
The Best Memes & Tweets About Beyoncé’s Surprise “I’M THAT GIRL” Video Teaser
By Brian Anthony Hernandez
Megan The Stallion’s “Anxiety” Song Shouts Out Britney Spears & Whitney Houston
By Grace Wehniainen
Beyoncé Is The First Woman To Have A No. 1 Album Since Adele Did Almost A Year Ago
By Radhika Menon
Get Even More From Bustle — Sign Up For The Newsletter