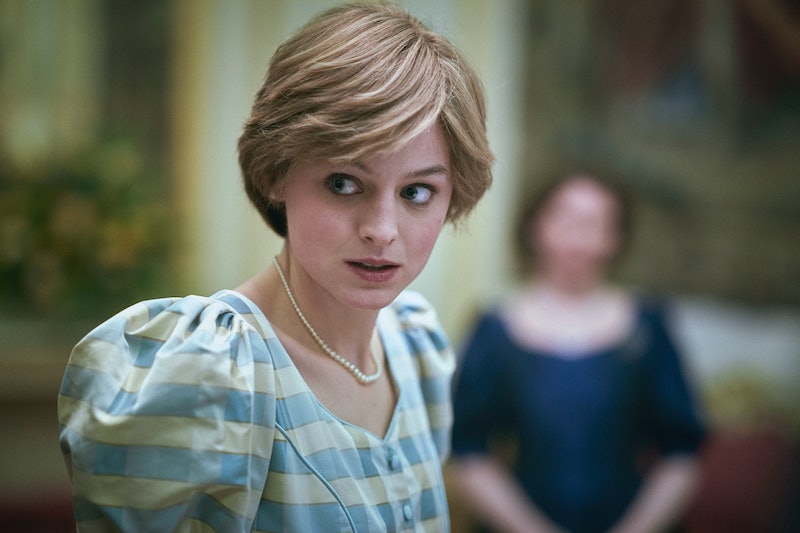 When series four of The Crown premiered in Nov. 2020 it was the antidote to winter lockdown that I needed. With Olivia Colman playing the Queen and Gillian Anderson entering the show as Margaret Thatcher, it was bound to be sensational. However, the breakout star of the series has been Emma Corrin. The Netflix award-winning series was the Cambridge graduate's first role and Corrin has recently revealed she practiced Princess Diana’s voice with her mum.

In an interview with the Observer, Corrin explained that her mum came in super handy when she had to nail down Diana’s voice.

“I would rehearse with my mum. She’s a speech therapist, and she helped me to locate it,” she told the publication, “I’d watched Diana: In Her Own Words [a 2017 TV documentary], and I had been so captivated by, and interested in, her voice. It’s unique. She was a Sloane Ranger. For that, you drop your jaw at the end of every sentence or phrase, and it makes everything slow and long.”

In an interview with Variety back in October 2020, the actor revealed another trick she used to perfect Diana's speaking voice. Corrin explained that practicing the word "alright" was a good to unlock the young royal's tone of voice. "She goes down at the end of everything she says, which makes everything she says sound quite sad," she added.

As well as the voice, Corrin also spent learning how to roller skate and how to dance for the Diana role, she told the Observer. She also told British Vogue that she worked closed with movement coach Polly Bennett to match how Diana moved. She said she felt she most resembled a cat.

The love triangle between Prince Charles, Princess Diana, and Camilla Parker Bowles has been well documented throughout history and is a key storyline in The Crown. One particuarly important scene depicts a (fictional ) lunch between Diana and Camilla. Corrin spoke about this scene and how important it was to demonstrate the tension between the two women. And the scene was painful for more than one reason. “I had the worst period pains of my life: I had a bucket on the floor, because I thought I was going to be sick,” she told the Observer.

While having PMS on set sounds terrible, Corrin said there was at least one bright side: “I think it helped, because I was so physically uncomfortable; it added to the scene, because I didn’t need to play her anguish.”

The future looks super bright for Corrin and, when asked what she wants to do next she told the Observer, “I want to do a gritty, independent film, maybe in Scotland or something. I’ll have an outrageous accent, and flowing red hair.”

More like this
Helena Bonham Carter Doesn't Think 'The Crown' “Should Carry On"
By Sam Ramsden
Con O'Neill Was Connected With Sarah Lancashire Long Before 'Happy Valley'
By El Hunt
Turns Out George Clooney Is A Huge Fan Of This Classic British Game Show
By El Hunt
'Bridgerton' S3 Will Show A *Very* Different Side To Kanthony
By Sam Ramsden
Get The Very Best Of Bustle/UK
Sign up for Bustle UK's twice-weekly newsletter, featuring the latest must-watch TV, moving personal stories, and expert advice on the hottest viral buys.