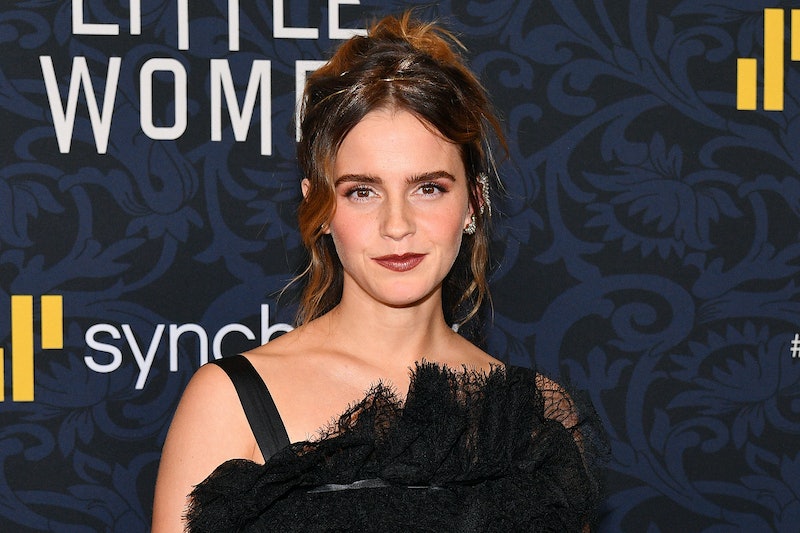 There has been a lot of debate about the efficacy of posting a black square on Instagram in support of #BlackoutTuesday, but perhaps nothing has encapsulated that discourse more than Emma Watson's controversial Instagram activism. Following backlash, Emma Watson spoke out against racism and showed support for Black Lives Matter in a new post on Wednesday, June 3. (Though it might appear as though her statements were shared late on Tuesday, the posts were actually shared after Blackout Tuesday was over in the U.K.)

Watson was criticized by Instagram followers for editing a white square around her three posts of black squares, which were used across the site on Blackout Tuesday to stand in solidarity with the Black Lives Matter movement, in order to fit her Instagram aesthetic, as her other posts on the social network are also cropped with white squares. Many fans thought that changing the black squares lessened the posts' impact, and gave her flack for not sharing resources or speaking on the movement outside of her square posts.

Watson's statement doesn't directly address the backlash, but it does clarify where she stands. “There is so much racism, both in our past and present, that is not acknowledged nor accounted for,” she wrote. “White supremacy is one of the systems of hierarchy and dominance, of exploitation and oppression, that is tightly stitched into society. As a white person, I have benefited from this.”

The actor went on to explain that she was still learning for herself how she can help dismantle systemic racism, and promised to share resources that she's found useful with her followers. "Whilst we might feel that, as individuals, we’re working hard internally to be anti-racist, we need to work harder to actively tackle the structural and institutional racism around us," she said. "I’m still learning about the many ways I unconsciously support and uphold a system that is structurally racist. I see your anger, sadness and pain. I cannot know what this feels like for you but it doesn’t mean I won’t try to."

While many fans were disappointed in how long it took for her to speak out in light of the ongoing protests of the killing of George Floyd, others are now coming to her defense, citing how Watson has spoken about benefitting from white privilege in the past. In addition, the actor's activism have been well-documented. Watson gave a speech on feminism to the United Nations in 2014, when she was named the UN Woman Goodwill Ambassador, and has advocated for girls' education and other feminist causes ever since. Given her history of activism, fans are hopeful that she'll follow through on her statement.

More like this
Rupert Grint Just Shared A *Major* Update About Ron Weasley’s Future
By El Hunt
Jennifer Coolidge Hunted For Jewels & Lashes In J.Lo’s Hotel Room
By Jake Viswanath
What Really Happened Between Lea Michele & Sadie Sink On 'The Tonight Show'
By El Hunt
New Details About Jeremy Renner's Snowplow Accident Reveal The Actor's Intentions
By Sam Ramsden
Get Even More From Bustle — Sign Up For The Newsletter
From hair trends to relationship advice, our daily newsletter has everything you need to sound like a person who’s on TikTok, even if you aren’t.